The Shepherd's Hut By Tim Winton

The Shepherd's Hut is Tim Winton's much anticipated latest novel. I am a fan, but with reservations. I loved Cloudstreet and Dirt Music but hated The Riders (it has the dubious honour of being one of my very first DNF books). Breath was good but a bit blokey and Eyrie was okay, but a bit blokey. I adore his children's picture book illustrated by Karen Louise called The Deep. And his essays in The Boy Behind the Curtain were truly luminous.

So I entered The Shepherd's Hut cautiously. 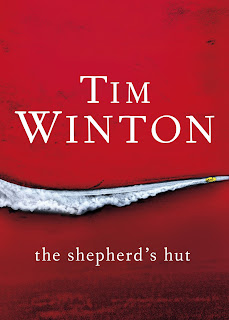 The first 20 or so pages were a struggle for me. I know that there are awful dad's out there, I know what they can do. I used to be a teacher, I've assisted some of those families in negotiating the quagmire of domestic violence over the years. But I don't feel the need to read about such sad, brutal things.

So I struggled with the first part of the story where we experienced Jaxie's dysfunctional relationship with his father. I thought, I can't do this.

Later that night, I tried again.

Without spoiling anything for anyone, Jaxie was on the run and suddenly we had a full-on road trip/survival story underway. Unusually for Winton, there wasn't a beach in sight, as Jaxie headed inland to the scrubby, salty desert areas of WA.

Some readers might find Jaxie's vernacular hard going. It annoyed me at the start, but I think I'm at an age when teenager-speak is annoying in whatever form it takes! But once Jaxie hit the road, the voice became more considered and thoughtful, and was perhaps meant to reflect the influence that Fintan had on him. If you disliked Huck Finn or Lincoln in the Bardo because of the local dialect, then steer clear of this one too. The swearing may also put off some readers.

Fintan was the ageing priest that Jaxie stumbled upon in the bush. We don't know why he's living a life of exile, but there were obviously some issues around the priesthood and the Catholic Church that Winton was exploring here. I'm still not sure what they were.

The same goes for Winton's well-known concern about toxic masculinity. He discusses it in detail, but what is the solution?

Because it's also #ReadIreland month over at Cathy's blog, I thought I would highlight the Irish character in Winton's story. Fintan, the priest is described by Jaxie like this,


I never did know what to make of Fintan MacGillis....He was Irish, he told me that straight up. But I never found out what it was he done to get himself put there by the lake, what kind of person he was before....He was one of them geezers been out on his own so long he talks to himself all day....You had to sort through all these bent up words to figure which was bullshit and which was true. What I mean is he made a lot of noise but sometimes he didn't say much. With that accent of his and the way he said things fancy and musical, it was like camouflage and you knew deep down he'd been doing this all his life, hiding in clear sight.


The Shepherd's Hut is not an easy read, but, in the end I found it to be a worthwhile encounter.
It's not quite a coming of age story because the becoming part was still to happen and it's not quite a road trip story as Jaxie's journey was nowhere near done. It was more like a vignette, a moment in time, a snapshot in time.

I'm not sure I learnt anything new or gained any insights into domestic violence, the lost and lonely or survival, but I can see an action-packed, fast-paced, gritty movie on the horizon!