Kafka on the Shore by Haruki Murakami

I like to think that I have taken my 'what to read whilst travelling' choices to an inspired level of brilliance, but I really outdid myself with our recent trip to Japan. Reading Murakami in Japan now feels like the ONLY place to read Murakami!

Not only does the usual Murakami weirdness make sense when you're actually in Japan, but you also realise just how important the environment is to Murakami and his characters. His descriptions of the trees, forests, waterways and urban spaces are everywhere as you move around the country. As are the crows.

In this case, the boy named crow is a mentor to our young protagonist, Kafka Tamura, perhaps an alter ego, a Japanese Jiminy Cricket. Whatever crow is or isn't, right from word one, Murakami is flagging that symbolism, mythology and psychology will be our prime concerns in Kafka on the Shore. 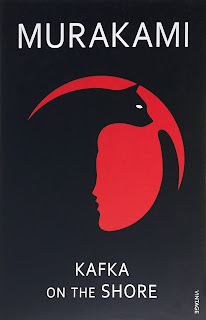 In Japanese mythology, crows are seen as a sign of 'divine intervention in human affairs' (wikipedia). Western mythology tends to associate the crow with bad news or as a harbinger of death. They're selfish, spread gossip and neglect their young. And they're everywhere in Japan. They sit on telegraph wires, fence posts and roof tops. You often wake up to their cawing, even in the city.

Cats are the other creatures that dominant not only Murakami stories, but many Japanese stories, yet curiously I didn't see one single cat in three weeks, let alone a talking cat! The opposite of the crow, cats are creatures of good luck, although still often associated with death and hauntings.

Silence, I discover is something you can actually hear.


There is no denying that Murakami is on very intimate terms with kooky.

If the talking cats weren't enough, a cameo appearance by Johnny Walker and Colonel Sanders of KFC fame might tip you over the edge. A reference to the (fictional) Picnic at Hanging Rock as an example of another group loss of consciousness event caught my eye. Did Murakami know that it was an urban myth? Is that what he was implying about his own story? The sense of mystery and other-worldliness was certainly a shared atmosphere between the two stories.

I was also amazed by truck drivers who suddenly became classic music afficiandos, quiet librarians who turned out to be sex fiends and sex workers who quoted philosophers. What's not to love? The kookiness gets under my skin and into my head. Just like what happened to me with his previous books.

1Q84 is still roaming around in my head, Colourless Tsukuru less so, but it's still a memorable book experience.

One of the really enjoyable aspects to reading Murakami in Japan is the place names. Suddenly they really mean something. Most of the action in Kafka takes place in Takamatsu on the island of Shikoku.

We didn't get to Shikiko with this visit, but we did see one of the huge bridges, from a distance, that joins Shikoko to Honshu and we spent some time at the station that is the interchange for the JR line that goes to Takamatsu. Seeing the name of the city featured in my book up in lights suddenly grounded this surreal story into reality. 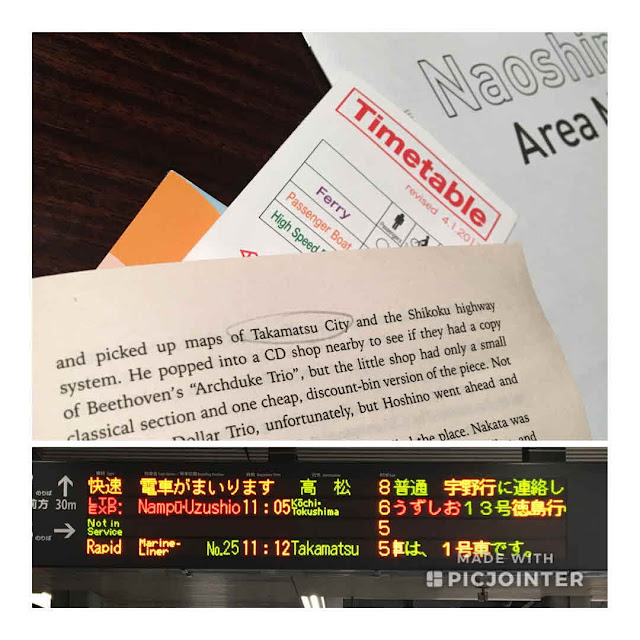 This is only my fourth Murakami (see my Author Challenge tab for details) so I'm not sure I can safely name all his common themes and ideas, but there are a few that I've clocked. Going into the woods/fear of getting lost, weird sex, talking creatures, dreams, random jazz references, loneliness and silence. And for me, the reader, there is an over-riding sense of bewilderment (WTF was that about?) as well as an overwhelming sense of wanting more (whatever it was a think I like it!)

I'm caught between one void and another. I have no idea what's right, what's wrong. I don't even know what I want anymore. I'm standing alone in the middle of a horrific sandstorm. I can't move, and can't even see my fingertips.

Murakami doesn't wrap his stories up with a neat, tidy bow or resolve many of the story lines. This should be totally frustrating...and it is, but somehow you love being kept in the dark and confused at the same time. Perhaps it's the likeable characters? Or perhaps it's the not so subtle way he plays with your head? Or perhaps it is the hope that the next book he writes will bring you one step closer to understanding this maddening man and his ability to suck you into his world.

Every one of us is losing something precious to us....Lost opportunities, lost possibilities, feelings we can never get back again. That's part of what it means to be alive. But inside our heads - at least that's how I imagine it - there's a little room where we store those memories.


Murakami likes to do the whole books in books thing. Kafka's backlist was an obvious start -The Castle, The Trial, Metamorphosis and In the Penal Colony in this case. But he also referenced The Arabian Nights, the complete works of Natsume Soseki, a book about the trial of Adolf Eichmann (I can only assume it was Hannah Arendt's Eichmann in Jerusalem), Electra by Sophocles, The Tale of the Genji and 'The Chrysanthemum Pledge' in Tales of Moonlight and Rain by Ueda Akinari.

So many tangents, so many connections, which one should I tackle next?
Posted by Brona Labels 1001 Books, Belonging, Books IN books, Coming of Age, Consciousness, Discovery, Imagination, Japan, Journey, Loss, Love, Magic Realism, Murakami, Myths & Legends, Psychology, Time & Memory, Translation, Travel at 24.5.18
Email ThisBlogThis!Share to TwitterShare to FacebookShare to Pinterest