Reading Frankenstein for the first time was a curious thing. We all think we know the story. At least, I thought I did. I was expecting a slock-horror story full of scary, lurking, creeping monster moments with lots of people screaming and fleeing his terrible claws. I didn't get this. 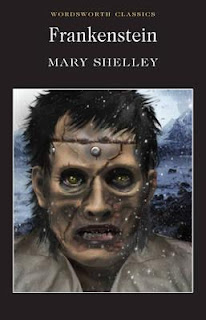 I also hadn't appreciated that it would be an example of Romantic era thinking. I'm not a huge fan of romanticism, described by wikipedia as,


an artistic, literary, musical and intellectual movement that originated in Europe toward the end of the 18th century, and in most areas was at its peak in the approximate period from 1800 to 1850. Romanticism was characterized by its emphasis on emotion and individualism as well as glorification of all the past and nature, preferring the medieval rather than the classical. It was partly a reaction to the Industrial Revolution, Rationalism and Classicism of the Enlightenment.


I'm all for exploring character emotion and psychology, but I often feel that Romantic writers are out of touch with own their times and their story often suffers for it's lack of reality. Frankenstein was certainly a curious and unexpected mix of nostalgia, scientific advancement, individualism and gothic melodrama.

Shelley obviously had a lot to say about absent parents in this story. I'm finding the bio on both her and her mother by Charlotte Gordon fascinating and revealing...thoughts and review to come later though.

Like Shelley, the monster just wanted to be loved and to belong. Dr Frankenstein and the wider society denied him that opportunity. His reaction can, therefore, be seen as a normal response to such an all-encompassing rejection. Except that these actions then meant that he would forever be on the outside of the regular society he desired to be in. Just like Shelley herself, perhaps?

Dr Frankenstein meddled with science without thinking through the consequences. He was after personal glory rather than thinking about the betterment of society as a whole. The individualism admired by the Romantics has negative consequences when viewed through the prism of the larger community. One man's selfish actions can have ongoing and tragic effects on the people around him.


Dr Frankenstein and his monster were two tragic cases of misunderstanding, miscommunication and lack of personal responsibility. The reader is given more than enough detail to understand how both got to the point that they got to, but you're also left with a sense of frustration by their inability to walk in the others shoes. They might follow and track each other all around Europe, but it's a physical journey not a journey of discovery or enlightenment.

I did enjoy my #Frankenfest reading experience, but it wasn't what I expected. It felt quite juvenile and self-indulgent and certainly not the horror story I was anticipating. I'm now more inclined to agree with Gremaine Greer's opinion that I noted in my Preface post (link below). Frankenstein is not a great novel, but it was a fun October read for the Classics Club #ccdare.

As noted in previous posts, I'm noticing lots of bookish references to grief and loss, that reflects my own personal journey right now. Frankenstein revealed this,


'but is it not the duty of survivors, that we refrain from augmenting their unhappiness by an appearance of immoderate grief? It is also a duty owed to yourself; for excessive sorrow prevents improvement or enjoyment, or even the discharge of daily usefulness, without which no man is fit for society.'