The World Was Whole by Fiona Wright

The World Was Whole by Fiona Wright is a difficult book to review. It's a personal collection of Wright's essays, anecdotes and snippets. They are revealing and specific, almost like reading someone's private journal. Yet, all these sketches are written with such emotional intelligence and compassion that they become universal, finding their own connection with each reader. 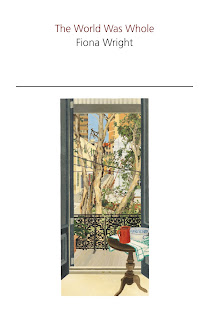 I underlined so many sections and googled so many poems so that I could read the whole after being tempted by the snippet (one example being Aubade by Louise Gluck) which is always a sign that a book has affected me or moved me deeply. Wright has a lot to say, from her perspective as someone who has anorexia nervosa, about our bodies, how we perceive ourselves, space, environments, nature, food, habits and rituals.

We only half notice the truly extraordinary landscapes, places and situations that we move through.


I learnt a lot about the complex nature of anorexia. As someone who derives as much pleasure from food and eating out as I do, it was challenging to hear of how complicated all this gets when you have an eating disorder.

Our days are consumed by making choices about food, by worrying over the things that we might eat or have just eaten.


Yet, most of the women I know have had body issues at varying points in their life. It is hard to escape societal expectation, (false) media images that become the norm and all the conflicting guidelines about how much, how little, what, when and where.

Behaviour, despite what fiction would have us believe, cannot tell us everything, or even very much, about a person.


I enjoyed her observations about the changing face of Sydney suburbs and found a lot to compare about her time in China, where it's 'hard to feel significant' amongst the overwhelming crowds, with my own time there 20 years ago.

But there were also times when I felt incredibly old and maternal towards Wright. I wanted to bundle her into my now, much older arms, (along with my younger self), and plead with them not to be so hard on themselves, to let go the angst and conflict and insecurities that absorb(ed) their days. This time feels like it crawls by at a painfully slow pace, yet it's gone in the blink of an eye. And suddenly you find yourself in your 50's, calmer, at peace, comfortable and secure, in a way that your (my) younger self would have scorned and envied at the same time.

It is complicated, but most of the time we make it more complicated than we need to. It's a journey we all have to go on, at our pace in our own way. I believe it's possible for everyone to eventually feel a sense of belonging and acceptance. You just have to give it time. And be kind to yourself along the way.