The Belly of Paris by Émile Zola

Le Ventre de Paris (also known as The Belly of Paris - a direct translation, or The Fat and the Thin
referring to one of the main ideas explored in the story) is not only an extremely visual story, but a visceral one too. 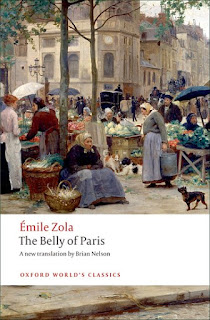 Zola's descriptions of the food markets at Les Halles are colourful, very detailed and lengthy! He leaves no basket or barrow unturned. Every smell is documented including the decaying, the over-ripe and the composted.

The political and social injustices of the times are also symbolised in the Les Halles markets and reinforced by the various natures of the people who live and work there.

Many of Zola's standard themes are explored here - moral ambiguity, excess, waste, realism, gluttony, materialism, decadence, the haves and the have-nots. Consumerism, in particular, is placed under the Zola microscope in The Belly of Paris, as is the whole idea of spying, voyeurism, surveillance and gossip. Everyone watches everyone else and everyone discusses it with anyone who will listen.

One of the curiosities, for me, in this story and the previous Zola, La Curée is the whole push & pull against the renovation of Paris by Haussmann. On the one hand there is a real sense of loss and nostalgia for 'Old Paris', yet there's also an appreciation of the improved sanitation and open spaces that the clean up achieved. Zola writes about the tension between the corruption and the dynamism inherent in this process in all of his books.

It makes me think of the current concerns many Sydney-siders feel for the major road work and light rail projects happening around the city right now. I hear lots of people bemoaning the changing face of Sydney and the loss of old Sydney and that things will never be the same again. That it will make things worse not better. As a devotee of museums and history, I know that these exact same sentiments were expressed in the 1920's when large areas of The Rocks and North Sydney were pulled down to build the Sydney Harbour Bridge.

No-one in Sydney, or visiting Sydney, could now imagine it without our beautiful, graceful bridge spanning the harbour. It is instagrammed and hashtagged on an hourly basis all around the world. Just like we now love and appreciate the beautiful, graceful boulevards and open spaces created by Haussmann in Paris. Neither city misses the slums or narrow, crowded streets that were razed to create these beautiful new spaces.

At the time, the fear of change and sentimentality stopped many of the locals from seeing the possible beauty or improved functionality that would result from the change. They could not imagine that future generations would be grateful for the sacrifice and upheaval required to update, move forward and 'future-proof' their city.

I'm not suggesting that our current west connex, north connex & light rail projects will ever be considered beautiful, charming and elegant by future generations, that might be stretching the friendship too far, but they will add (in part) a functionality to our city that is currently lacking. Sadly our particular project is not being managed by a larger-than-life character like Haussmann. His bold vision is sadly lacking in Sydney. But then a large factor in his work was to make it easier for governments to police the city and stop the barricades - a practical, controversial consideration that upset many at the time. Yet the Champs Elysee was born. And who could now imagine Paris without the Champs Elysee?


To get back to Zola's main theme in The Belly of Paris, though, let's start with Claude Lantier (the artist based on Paul Cezanne) during his 'Battle of the Fat and the Thin' discussion,

In these pictures Claude saw the entire drama of human life; and he ended by dividing everyone into Fat and Thin, two hostile groups, one of which devours the other and grows fat and sleek and endlessly enjoys itself.

'Cain', he said, 'was a Fat man and Abel a Thin one. Ever since that first murder, the big eaters have sucked the lifeblood out of the small eaters. The strong constantly prey on the weak....Beware of the Fat, my friend!'

Gavard is Fat, but the sort that pretends to be Thin....Mademoiselle Saget and Madame Lecœur are Thin, but the kind to beware of - Thin people desperate to be Fat. My friend Marjolin, little Cadine, La Sarriette, they're all Fat. They don't know it yet, because they're so young and innocent. It must be said that the Fat , before they get older, are charming creatures.


Zola not only sees the modern trend in a division between the haves and have nots, the takers and the givers, but relates it back to the very beginning of human story. Since the beginning of time, we have been creating stories to bring to light our differences; what does it say about us, I wonder, that we are still telling the same stories thousands of years later?

Are we slow learners? Do we never learn from the lessons of history? Does every generation have to re-invent the wheel? Or are we just eternally interested in ourselves and our stories?

References to Les Halles are everywhere throughout the story and read like paintings. Fortunately many, many artists have painted these scenes, including the one chosen for the cover of the Oxford University Press edition by Victor-Gabriel Gilbert, The Square in Front of Les Halles 1880.

Brian Nelson in his Introduction explains that Zola 'combines the vision of a painter with the approach of a sociologist and reporter.' Below are a few of my favourite examples.

The opening to the Rue Rambteau was blocked by a barricade of orange pumpkins in two rows, sprawling at their ease and swelling out their bellies. Here and there gleamed the varnished golden-brown of a basket of onions, the blood-red of a heap of tomatoes, the soft yellow of a display of cucumbers, and the deep mauve of aubergines.


That church is a piece of bastard architecture, made up of the death agony of the Middle Ages and the birth pains of the Renaissance....There it is with its rose windows, and without a congregation, while Les Halles keep growing next to it.

A huge arcade, a gaping doorway, would open to his gaze; and the markets seemed to crowd up one on top of the other, with their two lines of roof, their countless shutters and blinds...a vast Babylonian structure of metal wonderfully delicate in its workmanship, and criss-crossed by hanging gardens, aerial galleries, and flying buttresses.

The giant markets, overflowing with food, had brought things to a head. They seemed like some satiated beast, embodying Paris itself, grown enormously fat, and silently supporting the Empire.


The warm afternoon sun had softened the cheeses; the mould on the rinds was melting and glazing over with the rich colours of red copper verdigris, like wounds that have badly healed; under the oak leaves, a breeze lifted the skins of the olivets, which seemed to move up and down with the slow deep breathing of a man asleep.


Favourite Character: Maybe not my favourite character, but certainly, for me, the most memorable was La Belle Lisa 'she was a steady, sensible Macquart, reasonable and logical in her craving for well-being.' Quietly ambitious, determined, hard-working, voluptuous. Lisa embodies the bourgeoisie sensibility of looking out for oneself and turning a blind eye to the larger problems within society as being none of her business and beyond her control to do anything about anyway.

Favourite or Forget: As I slowly read Zola's books in chronological order for Fanda's #Zoladdiction each year, they all become forever burnt onto my memory. The abundance of food descriptions and Zola's play with homographs (trifle, ripening, fruit, sweetly etc) made this one a fun read. I think this particular OWC cover is my favourite of all the Zola covers.

Facts: Le Ventre de Paris was serialised in the daily newspaper L'État from 12 January to 17 March 1873. It's the third book in Zola's Rougon-Macquart series.
Posted by Brona Labels 1873, Classic, Food, France, Paris, Series, Zoladdiction at 21.4.19
Email ThisBlogThis!Share to TwitterShare to FacebookShare to Pinterest