Since last we spoke, I've been reading up on Herman to gain more insights into his history, motivations, character and intentions.

I've been feeling quite confused about him actually. I felt that I was getting mixed messages. Or that I had missed the memo that explained everything.

Philbrick in Why Read Moby-Dick? had prepared me for Melville's anti-slavery stance - 'a lie festered at the ideological core of the then-thirty states of America' - and for his first hand experience with the 'democratic diversity' of working life on board a whaling ship. But for some reason I came away from this book thinking that Melville was a devout, religious man - with his biblical stories, analogies and 'divine equality'. Philbrick again, tells us that he was deeply concerned about death and what came next - 'is there a heaven?'

However his story is far more complex than that. And I will probably spend the next 7 months trying to unravel it! After only nine chapters I heard Melville sermonise on Jonah with all that old testament doom and gloom about original sin, guilt and punishment but then there was also moments, via Ishmael, where he was deeply questioning of the (political and religious) status quo as well as the strict beliefs that informed his Calvinistic upbringing. What was going on here?

It was only as I reread parts of Philbrick today, that I discovered a small line that I had missed first time, 'as the agnostic writing outside his own uncertain beliefs, Melville is describing the fantasy he desperately needed but could never quite convince himself existed.'

Now that explains a lot.

His agnosticism now explains to me that amazingly astute, acerbic line in The Spouter-Inn chapter:


The man's a human being just as I am: he has just as much reason to fear me, as I have to to be afraid of him. Better sleep with a sober cannibal than a drunken Christian.


Strange bedfellows indeed (Shakespearean pun intended!)
But it does make me wonder who Melville was thinking of - did he have a particular drunk Christian in mind or was it more of a general philosophical statement? Or was he simply saying that he would rather be with a sober/rational 'other' than with one of those Christians who fail to practice what they preach?

Anyway, below is what I've unearthed (of interest to me) so far.

Which brings me to my thoughts about - 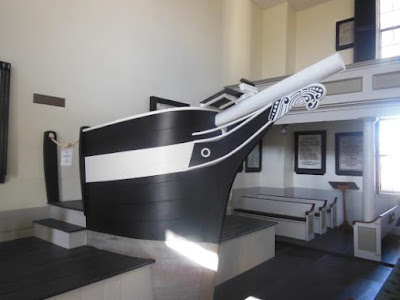 Thank you to those who posted their #MobyDickintheWild pics on instagram and twitter. I also loved how Laurie is now finding whales everywhere she goes!

Sorry about another long post; I seem to have absorbed some of Melville's verbosity and love of detail!
Posted by Brona Labels MobyDickReadalong, Readalong at 19.8.19
Email ThisBlogThis!Share to TwitterShare to FacebookShare to Pinterest