The Testaments by Margaret Atwood 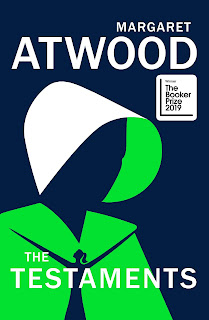 My work has been a bit crazy this year. And during August and September it was hectic and full of changes. So a lot of the hype surrounding the sequel to The Handmaid's Tale passed me by. I saw some excited chattering on blogs, twitter and goodreads. I heard some of the discussion around it's long-listing for the Booker Prize before publication date. And I caught a fleeting glimpse of the embargo breach by Amazon.

But until the day before the Booker announcement, I hadn't really given The Testaments much thought. Obviously I wanted to read it. I usually love Atwood's stuff and I LOVED The Handmaid's Tale. But it would have to be twenty years since I last read it.

Sadly, I missed the recent Elizabeth Moss tv adaptation of the book.

My plan had been to reread The Handmaid's Tale prior to starting The Testaments. I was in no hurry; knew I would get around to it one of these days, so I just let it sit in the back of my mind for later on.

Until Monday afternoon last week, when my new boss asked me who I thought would win the Booker. I had been so busy, I hadn't even clocked that it was that time of year again. Not having read any of the shortlist, all I could go on was my gut feel that Atwood would win. Her book had the hype, her writing was guaranteed to be good and it seemed like the safe option.

I was up early, getting ready for work, thinking a million other thoughts about all the things I needed to prioritise at work that day. As I sat down to eat breakfast, I glanced at twitter and suddenly realised that the Booker Prize was about to be announced. I quickly found the facebook feed so that little old me, all the way across the other side of the world on a completely different day, could watch the Monday night announcement in London, live! Don't you just love technology.

Didn't see that coming at all.

Without even thinking about it, I raced up to my bedroom, grab The Testaments from beside my bed and read the first chapter before work.

Any thought of rereading The Handmaid's Tale first went straight out the window - my justification being to see if one could read The Testaments without having any, or much knowledge of the first. I was going to offer myself up as a reading guinea pig!

So what did I remember about The Handmaid's Tale after all this time?

None of the names for starters, except that the Handmaids were named after the man - 'Offred' 'Ofthomas' etc. The handmaids were basically baby making machines. For some reason the wives were not able to produce healthy babies of their own. Religious ritual was evolved to make the baby making thing palatable. I remember that, in the end she (the main character, the titular Handmaid) must have escaped, or at least her story had got out, as she was being studied in a future history class or symposium. I remember that it was religious fanaticism that created Gilead, that this regime was still fairly new as people could remember a time before. I remember thinking that the parallels with our times were frighteningly familiar - which is the trademark of all truly good sci-fiction writing - to make it just enough like our world to make it seem possible. I recall that our Handmaid, either rediscovered her old boyfriend or established a new connection with a driver or guard or someone who helped her plan her escape. I believe the ending was deliberately unclear about the success of this mission. I loved it. It was feminist and very critical of the role religion plays in keeping women in their place. 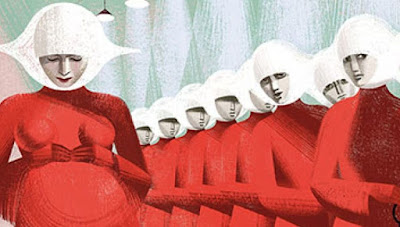 What were my initial reactions as I started The Testaments?

Firstly I was confused by the names. I couldn't remember if any of these people had been in the first book. Aunt Lydia? Commander Kyle? Not sure.

But I was soon delighted to discover that this didn't matter very much, as what I was getting here was the back story that filled in all the gaps. Via various narrators we saw how Gilead was created, how the rest of the world responded to this change as well as various hints and rumours about the story surrounding our earlier Handmaid and what happened to her and her baby.

I've read that some people have been disappointed or underwhelmed by Atwood's latest offering, but I thoroughly enjoyed being back her capable hands.

It didn't move me as strongly as I recall being moved by The Handmaid's Tale. This book felt less political, less feminist, less concerned with religion, less personal and dare I say, less urgent. Perhaps the chorus of voices diluted the power that I experienced with the first Handmaid's story. Maybe I've mellowed with age. Perhaps Atwood has. Or it could be a simple as the purpose of the story. The Handmaid's Tale asked questions and left lots unanswered. The gaps allowed for supposition, insecurity, fear and doubt. The Testaments tidied all of that up. And without giving away the ending, the homage to the first book at the end of the second, was satisfying and offered a number of pleasing resolutions.

Naomi @Consumed by Ink and Marcie @Buried in Print are hosting Margaret Atwood Reading Month in November that will include a readalong of The Handmaid's Tale and The Testaments. I'm the rebel who will be reading the books in reverse order as I'm hoping to squeeze in a reread of The Handmaid's Tale along with ALL the other blogging commitments I have on my plate for November!

To finish up, I want to bring to light a little known Aussie connection to Atwood. Well, I didn't know this - perhaps you did?

In the Sydney Morning Herald on the 16th Feb 2019, Nick Bryant wrote,

Her connection with the Sunshine State comes from her second husband, the novelist Graeme Gibson, whose father emigrated there from Canada in search of a friendlier climate and cleaner air. "Every time we got invited to Australia we would go up to Brisbane to visit the rellies," she says, laughing. "His mother and his grandmother were from there."