Till Apples Grow on an Orange Tree by Cassandra Pybus 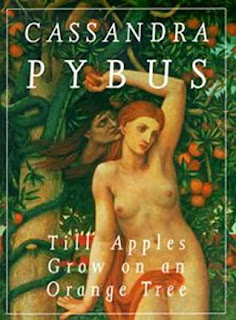 From chaste kisses to lost innocence; from the bohemian world of sixties Sydney to the counterculture in San Francisco; from radical feminism to disillusion, Cassandra Pybus opens the door on her own remarkable life and transforms it into a mirror which reflects ourselves. Her candid and passionate journey through personal memory and history offers a meditation on place, on politics, and on the pain of disappointment and betrayal, interwoven with an unexpectedly heart-warming love story.


A few years ago I spotted this little gem on the shelves of a second-hand bookshop. It was almost AusReadingMonth and I thought that it would be the perfect slim read to fill out my schedule. For reasons I can no longer remember, I didn't fit it into my schedule that year. Or subsequent years...until 2019.

It was a prompt from within the Griffith Review 63 (that I'm currently reading) that brought Till Apples Grow on an Orange Tree to the top of my TBR.
Cassandra Pybus wrote a memoir piece for the Griffith Review titled Every Path Tells: Traversing the Landscape of Memory. I thoroughly enjoyed her writing and quickly realised that reading one of her books might help my Tasmanian box in the AusReadingMonth Bingo card.

Every Path Tells was an essay about the power of story telling, walking as meditation and the capacity of nature to soothe the soul. In Pybus' case, the natural environment was Tasmania, Lower Snug in particular, the home of her family and full of happy childhood memories.
However, at the start of the essay she finds herself, in her thirties, in Sydney, realising 'the simple proposition that my life was unfolding without my willing it.'

A trip back to Tasmania changed everything.


Suspended beneath Australia like a heart-shaped pendant of sapphire, emerald and tourmaline, Tasmania is where the world peters out in a succession of rugged peninsulas that ultimately crumble into the vast expanse of the Southern Ocean. Peering through the small window as the plane descended across the jagged Freycinet Peninsula into the tiny Hobart airport, I felt an inexplicable surge of pure satisfaction. It was as if Constantine Cavafy spoke directly to me: 'Arriving there is what you are destined for'.


Her descriptions of her walks are just lovely. I could almost smell the forests and feel the imprinted paths through them. I wanted to follow the desire lines to see where they might lead me too.

For Pybus, they led her home. To a strong sense of family and belonging, and to a second chance of love. For me, I gained a greater desire to see Tasmania for myself, to read more of Pybus' works and her bibliography has now added Heather Rose's Bruny and Robert MacFarlane's Understory to my wish list.

I confess that I knew next to nothing about Pybus. Reading about her interest in nature, feminism and history made me wonder how on earth this had happened. Surely with these common interests, I should have bumped into her writing somewhere before in the past 20 years.

For whatever reason, though, this was my first excursion into her writing and opinion.

Till Apples Grow on an Orange Tree was a memoir told via unconnected essays-as-memory. In one of the early essays I recognised elements from the her Griffith Review piece that had been reworked. I'm fascinated by this process. As a journal writer from way back, the reworking of an old idea that has had to time to be re-evaluated with maturity, new knowledge, experience and perspective is something I have played with at various times in my writing life. I'm sure I will have more to say about this process when I get to the end of Helen Garner's, Yellow Notebooks though!

A curiosity was discovering that Pybus and Garner had been friends, or at least friendly. But no longer. She delicately revealed that there is no more possibility of a friendship. I will now be searching for C or P references in Garner's notebook!

Pybus' essays started in the 1960's with her high school years, her best friend, Chloe, their uni years, messy love affairs and Chloe's eventual and tragically dramatic suicide. She explored her parents back stories with sensitivity and love.

I responded to her discussions about not belonging and transitory migration. I also moved around a number of times as a child, and struggled to find a place to belong as an adult. Pybus discovered that she could reinvent herself over and over again as the past does not hold you. Whereas I found, that you could run from your past as often as you like, and try to reinvent yourself any number of ways, but the past would always come back. It may not hold you, but it will haunt you until you face it squarely head on. And accept it and yourself.

Pybus' second chance at love also resonated with my own story. Maybe one day I will have the resources to reflect on my own love story, to give it a writerly meaning and context. It's an idea that itches and scratches at me occasionally, but I have many reservations. Like Pybus I believe that we all tell stories to give shape to our lives, but not every story needs to be made public!

I thoroughly enjoyed her history pieces about Tasmania. Lower Snug, Bruny Island and the  Indigenous history of this area.


We cannot remake the past, but surely the promise remains that we can remake the future, if only we can find it in ourselves to acknowledge the injustice of the past - from which we have benefited - and make some recompense.


Her pieces on Port Arthur and the Chinese in Tasmania felt less convincing though. A bit too meandering, and at times they felt like a writer in search of a story, any story.

Reflections on the Vietnam war protests from someone who actually participated in them will always be interesting for those of us too young to really remember this time.

A few of her pieces were obviously early thoughts about a topic that later became books - White Rajah: A Dynastic Intrigue (after spending time in Sarawak with her her husband's work) - The Woman who Walked to Russia: A writer's search for a lost legend (or a travelogue through the Canadian wilds). This piece also considered the pros and cons of solo travel; sometime I have also had plenty of opportunity to ponder.

I thoroughly enjoyed my time in Pybus' hands and will happily read more by her in the future, especially if it's about Tasmania. Her connection to the home of her early years, shines through with an authenticity and heart that makes these pieces rise up above the rest.