Caring For Country by Billy Griffiths 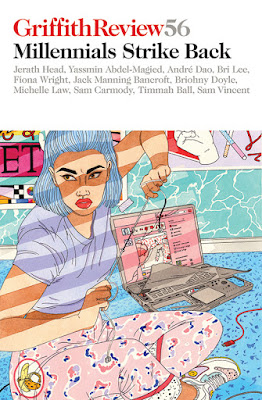 Recently I read something or saw something about the Ranger program in the Northern Territory, which led me to Billy Griffiths report in the Griffith Review Edition 56 | Millennials Strike Back | April 2017, Caring for country: The place where the Dreaming changed shape.

It's fascinating and encouraging to see the various ways that Indigenous peoples around the world are maintaining faith with their old ways as they incorporate the parts of modern life that suit them as well. The Ranger programs running in the NT are all about teaching the young how to care for country and get in touch with their culture. To make their work easier, they now use GPS, satellite imagery, aerial photography and other modern technologies. They also learn how to create new stories, art, dance and songlines that reflect their modern lives.

The other emerging story, gaining traction in the articles I'm reading, is the capacity of the Aborigines of Australia to evolve and adapt to seismic change over the 65 000 years they have lived on this continent. From the extinction of the megafauna to surviving the last ice age. White settlement is just one more thing to survive, adapt to and incorporate. The (white) story is also slowly evolving - from seeing the Aborigines as a culture doomed to die out in the face of a (superior) larger civilisation - to celebrating the longest living culture in the world surviving against all odds. Two hundred years in the context of 65 000 may seem like a mere blimp in time, but the consequences of our 200 years together impact all our daily interactions and understandings. We can marvel at the 65 000 years but it is today that we have to live in.

How does the NT ranger program figure in all of this?

Billy Griffiths takes us to Djinkarr, a small outstation in western Arnhem Land. He claims that these small, remote, poorly connected settlements are a good thing, (which flies in the face of the usual white conviction). He says there are 'overwhelming benefits to having people living on country. People sustain country, and country in turn sustains people.'

The country also gets a lot of love from Griffiths:


Small fires streak the savanna beneath me, as the land is worked and cleaned. The gentle smoke on the horizon is sign of a healthy country. In the distance, disappearing into a soft haze, lies the rugged stone country of the Arnhem Land Plateau. The plane wobbles over the mouth of the Liverpool River, where saltwater meets fresh, and descends towards a thin ribbon of grey on a cleared patch of thick, earthy red: the international airport. On one side of the airstrip, a few dozen houses cluster around a football oval; on the other, a neat grid delineates the newest suburb, called simply ‘New Sub’. Maningrida, as our destination is known, takes its name from the Kunibídji phrase Mane djang karirra: ‘the place where the Dreaming changed shape’.

This particular essay came about thanks to Griffiths involvement in a short-term, independent art and environment initiative known as The Arnhembrand Project. The aim was to tell 'healthy country' stories through paint and performance, science and oral history. The rangers play an important role in creating new stories about what is happening to their country.


The Djelk IPA is a vast estate, extending across monsoon rainforests, tropical savannas, grasslands, wetlands, sea country and stone country – ....Buffaloes, pigs, feral cats and cane toads have trampled, chewed, rubbed and wallowed their way across a delicate ecosystem, destroying habitats, spreading weeds, muddying springs, transforming the vegetation and exacerbating the eroding impact of wildfire. The effect on native species has been devastating. Their decline and extinction have deprived the Bininj of bush tucker as well as delivering a more existential loss: the displacement of totemic beings from their ancestral homes.


The rangers are using cool fires to manage the land, they are systemically clearing the land of weeds such as mimosa and they are culling the buffalo herds that are devastating the land and the local fauna.

The outstation movement and ranger programs have been evolving since the 1970's as small groups left the townships, failing due to illness and alcoholism and lack of purpose. They felt 'driven by a responsibility to return to country, to tend to sacred sites and to work the land through fire, ceremony, hunting and gathering.'

Betty Meehan, anthropologist, has spent her career working with various Aboriginal groups around Australia. In the 70's she was in the NT with the Blyth River people, where she claimed that this was not 'the end of the Dreaming', instead this was the place where the Dreaming was changing shape.

The late Lofty Bardayal Nadjamerrek (Wamud Namok), an Aboriginal elder from Manangrida said that the biggest threat to the environment is ‘empty country’: ‘not having people on country to look after it’.


The outstations, combined with the ranger services, are the key to avoiding the neglect that comes from empty country. ‘Outstations are not about the old ways, they are the birthplace of the new ways for us.’


The ranger program has not only benefited the local environment, it has also reintroduced pride and purpose into the community with kids staying at school longer to qualify for the internships. The flow on effects for health, mental health and the local economy seem self-evident.

There have been numerous articles and programs highlighting the ranger programs in the NT, Queensland and WA and even more websites devoted to sharing the news about local programs. A few are listed below.

I'm glad I could end #AusReadingMonth with a good news story.