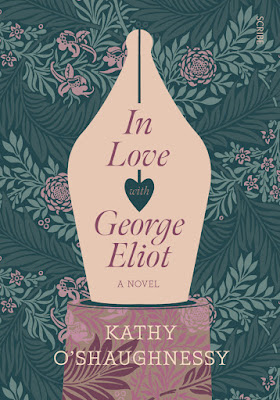 Kathy O'Shaughnessy has written an utterly delightful and immersive story about the extraordinary Marian Lewes, otherwise known as George Eliot. The book follows Marian from the early days of her unconventional 'marriage' to George Lewes through to her writing days, fame, second marriage and eventual death.

In Love With George Eliot not only refers to the people that surrounded and feted Marian throughout her lifetime but also three modern characters who love her work and are fascinated by her story. O'Shaughnessy herself, as well as her modern-day inventions, Kate, Ann and Han are just as immersed in Eliot's life story as we are. In a few brief chapters, inserted amongst the main story about Eliot, these three organise an Eliot conference in contemporary London and Venice, as they explore their own ethical quandaries. I wasn't completely sure that we need these chapters, but they irked me less as we went along.

As a fiction writer, O'Shaughnessy is able to enter areas considered no-go to a regular biographer. She is able to get inside Marian's head to speculate and wonder. She can imagine conversations and occasionally put people in the room who weren't really there. But it's not all supposition and imagination, the story is littered with direct quotes from Marian's letters and diaries as well as those from others. The research is there, as is the reverence and the curiosity.

I read Middlemarch and The Mill on the Floss a lifetime ago. I've always wanted to read more and I hope to one day revisit Middlemarch in particular. My sense is that O'Shaughnessy, not only loves Eliot, but has written a homage to her. In Love With George Eliot feels like reading an Eliot novel. There is perceptive insight, a careful pacing and elegant set pieces with the characters moving and talking amongst each other, sometimes with great insight and sometimes at a complete loss to explain themselves.

There is always an after-sadness belonging to a brief and interrupted intercourse between friends - the sadness of feeling that the blundering efforts we have made towards mutual understanding have only made a new veil between us.... We are quite unable to represent ourselves truly - why should we complain that our friends see a false image?

...I have blundered, as most of us do, from too much egoism and too little sympathy. If I am too imperfect to do and feel the right thing at the right moment, I am not without the slower sympathy that becomes all the stronger from a sense of previous mistake.


In Love With George Eliot is a rich, immersive read, best enjoyed slowly and thoughtfully. It's not a story to rush, but to savour.

Now I just have to work out how I'm going to read more Eliot sooner rather than later!
Posted by Brona Labels 2019, Biofiction, Fictionalised History, Reading England at 20.1.20
Email ThisBlogThis!Share to TwitterShare to FacebookShare to Pinterest