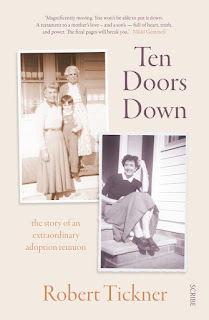 I recently attended an author talk featuring Robert Tickner talking about the story of his adoption. Ten Doors Down is the book of this story.

You may recall Tickner's name. He was an ALP politician during the Hawke and Keating era and the Minister for Aboriginal and Torres Strait Islander Affairs throughout the first half of the 90's. During this time, he was also going through the emotionally fraught experience of searching for his birth parents.

Early on, Tickner makes clear that he is one of the fortunate ones. He was adopted by two loving, generous parents. He had an idyllic childhood growing up in Forster, NSW. And his subsequent experiences in searching for and finding his birth family were mostly successful and positive.

His birth mother had a less happy time though. She grieved her whole life for the child she gave up. Even though she found love and happiness in marriage, she decided not to have any more children as she couldn't bear the thought of losing another child.

After the initial joy of rediscovering her son, she suffered terribly from knowing that she had spent most of her adult life living ten doors down from Tickner's adopted grandmother. A grandmother that Tickner visited nearly every school holidays. Knowing retrospectively that her son had been so close all this time was hard to absorb.

Ten Doors Down is a touching memoir and if you get a chance to listen to Tickner talk with Richard Fidler in Conversations, I would highly recommend it.

Posted by Brona Labels 2020, Adoption, Australian, Memoir at 4.4.20
Email ThisBlogThis!Share to TwitterShare to FacebookShare to Pinterest