Book Stop is an occasional meme that allows me to travel and indulge in a good bookshop browse, during these strange, strange times when we cannot travel outside our home state, let alone the country. I plan to combine my bookish instincts with my itchy feet and explore the world via bookshops.
I have a number of bookstores on my to-visit wish list, if I am ever in that country, state or neighbourhood. This is the perfect time to share some of them and my reasons for wanting to visit (beside the obvious reason, of course!)
This edition of Book Stop will also be combined with Paris In July as we head off to Shakespeare & Company, 37 rue de la Bûcherie, 75005 Paris. 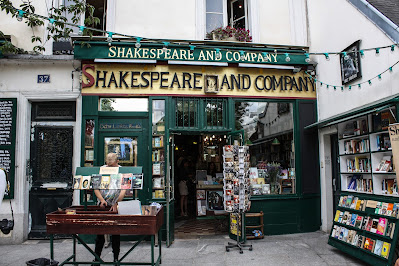 In July 1991 I spent three days in Paris. Nowhere near long enough, I'm sure you will all agree.
We arrived late afternoon and went straight to one of the camping grounds that ring outer Paris. The plan was to set up camp and drive into Paris at sunset so that our first view of Paris proper would be at night, all lit up with the lights that make it so magical. We boarded a Seine River cruise and ooh-ed and ahh-ed at the lights as we glided past all those famous sites I'd only ever read about until that time.
The rest of the evening was spent wandering around the Left Bank, trying to work out how to order and pay for pastries.
Paris was my very first experience in a foreign speaking country. I was 23 and travelling alone within a group. I was rather overwhelmed by the whole thing. So much of my time in Paris is a blur. My photos and a few brief notes in my journal are the only record I have.
I know I climbed all the stairs up the Eiffel Tower. The lines for the lift were long, even first thing in the morning, and I was young and fit. So climb I did!
1991 was the middle of the Gulf War and we were told that the city wasn't as full as usual with tourists as the war was keeping the American tourists at home. (I had already enjoyed the benefits of this in London during the past 5 months. I was nannying and tripping around the country on the weekends. The weekends I stayed in London, I was able to access last minute tickets for all the West End shows by lining up half an hour before the start. Every show had oodles of returned tickets thanks to the no-show of American tourists. I saw some amazing productions at a great price. No-one likes to perform to a half empty room!)
I still experienced Paris as being busy with bustling, hustling crowds, but apparently, most years it was worse!
The other problem with 1991 travelling, was the smoke haze from the fires in the Gulf. At the top of the Eiffel Tower our view was greatly impaired by the haze. The haze followed us all around Europe that summer.
I also remember climbing all the steps up the belfry of Notre Dame Cathedral in the stifling heat. I tasted escargot for the first (and last) time. I loved buying little cheese snacks at the corner convenience stores. I went through the Musée d-Orsay, walked up the Champs-Élysées and did a dash around the Louvre. But generally, I wandered the streets in a bit of giddy daze. I promised myself that one day I would return, and take my time. I would stay in one of the nicer apartments (not a tent), I would have more money and be a more confident traveller.
When I returned home to Australia four months later, I started a travel wishlist. Whenever I watched a tv program, or read an article, or a book, I would note down places of interest that I wanted to see for myself.
One such note was for the Shakespeare and Company bookstore.

Describe by many as controlled chaos, a place for dreamers and poets, the Shakespeare and Company has a well-known history and an enviable list of famous patrons.
Jeanette Winterson writes in the LitHub,

There’s Hemingway, flexing his fists from the boxing ring, stopping by to pick up a book. James Joyce never arrives before noon and usually needs to borrow money. The big woman with the white poodle is Gertrude Stein. By the stove, beautiful and tired, Djuna Barnes is talking about her novel Nightwood to T. S. Eliot.

Scott Fitzgerald likes to sit and read on the stoop in the sun, and Sylvia Beach has made up her mind to publish Ulysses, because no one else will.

Started by Sylvia Beach in 1919 and now run by George Whitman and his daughter, Sylvia, Shakespeare and Company has changed owners, address and been forced to close due to war and more recently Covid-19. It is now part of Parisian folklore and a must-see for many book-loving travellers.
I, for one, (if international travel ever resumes, and we can return to Europe without quarantining for two weeks), will make Shakespeare and Company my first port of call.
In the meantime, I will endeavour to read one of the many books written about this iconic bookshop. 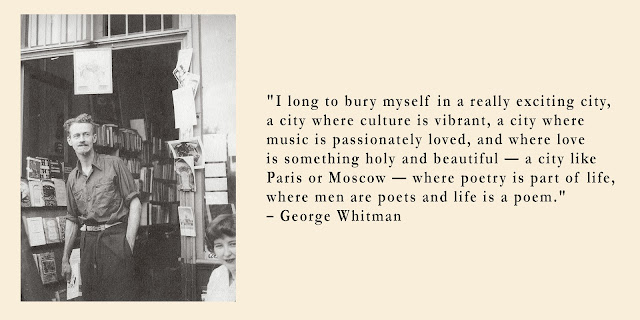