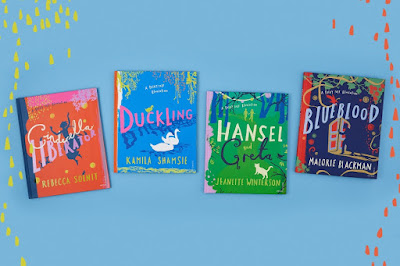 The series, A Fairy Tale Revolution, consists of four picture books from Vintage Classics, that 'remix and revive' well-known fairy tales and give them a modern, feminist twist. Featuring four amazing UK authors - Jeanette Winterson, Kamila Shamsie, Malorie Blackman and Rebecca Solnit - flexing their authorial muscles in a new format.
Like most fairy tales, however, they are not really designed to be read with or by very young people. Fairy tales are cautionary tales offering up dire consequences to those who do not take heed. They're stories created to keep you safe by alerting you to the dangers of jealous partners, controlling partners, death, grief and loss. They warn you of the consequences of selfish behaviour, greed, laziness, arrogance and self-indulgence.

The old tales, pre-Disney, do not mince words.

If you don't pay attention, you could end up dead. You could be eaten by a wolf, enslaved, lost forever in the forest, cast out of your community, orphaned or maimed. Sometimes it was a stranger you had to beware, but even way back when, everyone knew that the biggest danger lurked much closer to home.

Domestic violence and the awful way that families can treat each other have always been the main causes for concern in fairy tales. Dressing them up as a story, only took away some of the power and pain. The Brothers Grimm struggled with this harsh image of family life, changing many of the original stories from being about mothers to stepmothers, and fathers to devils, to soften the blow.

Wicked, cruel, selfish mother-figures and strict, controlling, violent father-figures haunt the pages of most fairy tales. Obsessive husbands, manipulative wives, lying, lazy children - families were viewed as toxic danger zones. Safe families could change at the drop of a hat, or the death of a parent. The big, bad world was full of injustice and inequity.

These were adult stories designed to frighten and instruct. There were always consequences, but not necessarily the ones you would expect. They urged you to be vigilant. Fairy tales highlighted some of the evil, wicked and unfair practices that exist in our world.

Most of the modern retellings sanitise these older tales. The lazy little pigs don't get eaten by the wolf, they merely run to the next house. The wolf doesn't get boiled alive, he jumps out the window and runs away. Cinderella's stepsisters don't lop off parts of their feet to fit into the slipper, birds no longer peck out their eyes. The consequences for being lazy, inept or selfish are watered down. Our darker selves are ignored or discounted, while all the bad stuff is removed, onto an 'other'. The modern retellings take away the morals embedded in the old tales about our own personal development, our dual natures, the good and bad inside us all. All the bad is put out there, away from us. The lesson now is that we're all fine just as we are. The bad people are out there, out of our control, but nothing to do with us. We don't have to change, we just have to be cautious and keep out the baddie (other).

Many years ago I devoured Bruno Bettelheim's The Uses of Enchantment. I was fascinated by the idea of children returning to a story over and over again to satisfy some inner conflict. I saw this in my teaching career all the time. Certain stories resonated with some groups and individuals in a very deep way. They had to be read multiple times over an extended period of time, until the need was met.

These stories were always the 'darker' ones. Stories that were considered scary or sad. Stories where someone died, got lost, faced down a fear or suffered a major disappointment. Books like Koala Lou, Dogger, Harry the Dirty Dog, The Spooky Old Tree, The Deep, The Gingerbread Man (where the GM got eaten by the fox), The Hobyahs, The Story About Ping, The Giving Tree, A Lion in the Meadow, and The Story of Ferdinand.

When I was a child, I was obsessed with two particular fairy tales - Snow-White & Rose-Red and Rumpelstiltskin. Bettelheim, observed that fairy tales about siblings often “stand for seemingly incompatible aspects of the human personality.” There was also something in there about trust, and appearances being deceiving and our wild natures that haunted me as well. While Rumpelstiltskin taught me about the perils of bragging, and making bad decisions and why it's important to name the evil forces acting upon us, to take away their power.

Much of Bettelheim's research has been debunked in more recent times, but his ideas about the darker elements in stories, their psychological impact and how they resonate with children, still holds true.

These new retellings of Cinderella, Bluebeard, Hansel and Gretel, and The Ugly Duckling are deep, dark and delicious. They are adult stories dressed up in picture book form.

Jeanette Winterson in Hansel & Greta turns the known story into an environmental tale of greed, destruction and wickedness. Her word play is delicious and witty. This was probably my favourite story of the four.

Malorie Blackman gives us the very modern Blueblood complete with video surveillance and mobile technology. Nia Blueblood is the great-great-great-great-great-granddaughter of Bluebeard. She is a vigilante outing men who have abused other women and gotten away with it...until now. This was dark and shocking and subversive. I loved it!

Kamila Shamsie's Duckling, is a disturbing tale about body-shaming, fear of the other and bullying. The fate of the outsider, the refugee, and the loner are considered in this sad tale of belonging and being true to yourself.

Cinderella Liberator by Rebecca Solnit maintains a more traditional structure until Cinderella and the Prince just become good friends who help each other to be their best selves. Transformation, asking for help and helping others are the main themes. Economic independence and liberation from traditional roles are seen as being good things for both sexes.

All four stories share feminist twists that delight the reader. At least, they delighted this reader. They also feature woodcut illustrations in the style of Arthur Rackman, by Laura Barrett. Check them out, I think you will love them too.