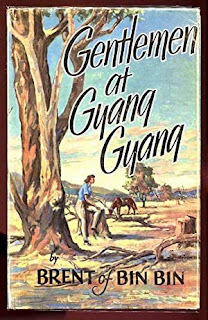 The first draft of Gentlemen at Gyang Gyang was written in 1928 by Stella Maria Sarah Miles Franklin (1879 - 1954) upon her return to Australia to care for her ageing parents. However it wasn't published until after her death in 1956.
You may have also noticed that the name on the book is not that of Miles Franklin. After writing her well-known first novel, My Brilliant Career, her literary and commercial success was very up and down. And from everything I've read (which is not much really), mostly down. In an attempt to move away from those poor reviews, she wrote under a number of pseudonyms, including Brent of Bin Bin: a colonial gentleman.
She wrote six books under this name including Up the country (1928); Ten Creeks Run (1930); Back to Bool Bool (1931); Prelude to waking (1950); Cockatoos (1954); and Gentlemen at Gyang Gyang (1956).
Bill @The Australian Legend has a much more comprehensive understanding of this period of Australian literature and I urge you to read his post for this book to get more of the background information.
This was my first attempt at a Brent book, having read My Brilliant Career way back when in my university days. I wasn't particularly inspired by MBC into trying any more of her books. I found Sybylla tedious. A drama queen, annoying from start to finish.
I didn't know what to expect from Gentlemen at Gyang Gyang, so I was rather surprised to realise I was reading an Australian rural romance, set in the beautiful Snowy Mountains region of Monaro. An area that Franklin knew well, as Talbingo, her home town, is part of this region.
Bernice Gaylord, our protagonist, was an Australian woman who had a natural ability to paint. Her family sent her to Europe to learn more. While there she unlearns her old school realism technique, developed Continental tastes, took a lover and eventually comes a cropper.

As a little thing of four or five Bernice had been wont to lie on her stomach and draw men and animals of action and character. When still in her teens, and sent abroad by public subscription because of her promise, she met other budding geniuses contemptuous of her ability to catch resemblance: merely photographic, they said. She had succumbed to the fashion of portraying things seen in terms of things imagined—many of them evidently in nightmares or licentious orgies. She had for a time been infected with "modern" ideas, which had at least shaken her out of mere convention and the frustrations of an inartistic and middle-class environment.

After her lover dumps her, she returns to Australia heart sore and unable to paint any more. Her father arranges for her to visit her godfather, Sylvester Labosseer, who runs a sheep farm on the Monaro. The aim is to relax in the bush, far from journalists and city life and recover her health (the reason given to the public for her sudden return to Australia).
In the peace and quiet of the Snowy Mountain region, surrounded by natural beauty and majestic mountain peaks, Bernice slowly rediscovers her creative urge. She begins by drawing portraits of the Cook, and the working dogs, until the wider picture captures her imagination,

this scene was marvellously captured by Bernice later. The setting was the snow-gum in her bridal bloom and her powdered grey-blue trunk and Alice-blue twigs beside the grey of the men's hut, with the grindstone in one corner and kookaburras above.

The gentlemen of the title, are all the men who work at the Gyang Gyang Plains station (so named because of the cockatoos that inhabited the area). Naturally, there are two particular gentlemen who come to her romantic attention.

The same men returned to him year after year. He had a picked squad of shearers that shore on all his places. The married men brought their sons to him as soon as they could handle axe or shears. He inspired in the berated native working men, who never thought of addressing him as "sir", a voluntary loyalty approaching that of feudal retainers shaped by generations of servitude.

This is one of the few references to Aboriginal workers in this book. White Australians of this time may have started to appreciate the country they had grown up in, no longer longing for Mother England, like their parents, but the Indigenous population was not necessarily included in this newfound love of country. But that's another story.
The gentlemanly romance is naturally complicated by an unsuccessful suitor, jealous local women and misunderstandings and secrets aplenty.
I ended up enjoying Gentlemen at Gyang Gyang far more than I thought I was going to at the start. Many of the descriptions were too over-blown for my taste, but there was no denying Franklin's love of country.

After dinner the men engaged in a game of five hundred. Bernice retired to her bed on the veranda to be guarded by the blackbutts and snow-gums, fairy-like in their perfumed blossom in the dim light of the stars, and the Southern Cross so near and kind that it seemed as if it could be plucked from the sky.

"Thank God for the kookaburras and magpies, for the sun and trees and whole world of blossom, and especially for the tea-tree and the creek, and all this wide and heavenly country with no awful people to drive one to distraction."

The city versus country trope, following in the tradition of Henry Lawson and Banjo Paterson, was regularly used by Franklin. Obviously, the city folk came off worse.

A few months of days in the surf or at the zoo, the moving pictures or the theatre, and Burberry's soul wilted like frost-bitten pumpkin-vines under the realization that he was of no importance in Sydney and had nothing to do.

"Good lord! I was like a cockatoo in a cage," he explained to Labosseer. "There isn't a blasted thing to do in those beastly suburbs. Nothing but that infernal idleness that rots a man, and among a crowd of bally imbeciles who don't know a gummy ewe from a two-tooth wether hogget, or a heifer from a cow, or a store beast from a fat, when they see it."

Franklin also explored women's issues.
Bernice was an independent woman who preferred to work on her paintings than marry and raise a tribe of kids. Bernice has to work hard to convince the gentlemen to see her painting as proper work, and not just something she was filling in her time with until she got married.

Miss Bernice Gaylord: "My work is the most important thing in the world to me."

Mr Spires: "But they all say that love is the most important thing in life to a woman."

Miss Gaylord: "Men have made up that yarn because they want it to be so."

After Franklin's death, her will stipulated the establishment of a literary prize to be awarded to "a novel which is of the highest literary merit and presents Australian life in any of its phases". The first prize was awarded in 1957. The Miles Franklin Award is now Australia's most well-known literary prize.
Franklin's desire to celebrate Australian life in all its phases, was articulated in her novel. Clearly her ideas on establishing art and culture, by Australians, for Australians, was something she felt passionate about for most of her life.

The need was for painters and novelists, as well as the ungifted, to break out of the established rut. A way must be found to suggest this different atmosphere both in picture and story—a fresh contribution must be made to technique.

"It's high time that scenes that foreigners and English know nothing about were recorded for a change."

I suspect this was one of the reasons why her work was not widely appreciated at the time. Europeans (and many Australians) considered Australia a cultural back-water, cringe-worthy and incapable of any kind of unique creativity. Some still do.
Finally, I was struck by the same-old, age-old debate about money, fiscal responsibility and financial bubbles.

As far as I can estimate, Australian life—and I suppose it's the same all over the world—rests on inflated values, and can't last....Fellows I've had here for the summer have stayed in the winter and made ten or fifteen pounds, even twenty pounds a week. And do they save that money to better themselves? Not a bit of it!

Gentlemen at Gyang Gyang was rather fun in the end. Like Franklin, I love our country's unique beauty and I appreciated her efforts to bring this to light in a literary way. I will certainly have a go at her other Brent of Bin Bin books.