Tess of the D'Urbervilles by Thomas Hardy


My rereading of Tess for the Classic Club Spin (after about 20 years) was a curious thing.

For starters, I barely remembered any of the story.
If you'd asked me what Tess was about a month ago I would have replied with something like this - "a fallen women, wandering the Dorset countryside featuring a few cows and a famous death scene. Romantic bucolic melancholia!"

Egad! There was nothing romantic about Tess. Everything about her was tragic from start to finish. Even the romance with Angel in the middle was suffused with her guilt & angst.

As for melancholy!
It was far more hostile, negative and doomed than mere melancholia usually suggests. Tess is a book to make you feel angry, upset and frustrated.

At least that's how I felt throughout most of the book.

I was furious at Tess' parents for their criminal neglect and lack of parental concern. Their selfishness and self-serving behaviour placed Tess in danger more than once and they never accepted any responsibility for the subsequent outcomes of this neglect.

I hated Alex D'Urberville for his arrogance, his manipulation and abuse of Tess and for the way he blamed Tess for his actions because she tempted him with her ' womanliness'.

I was furious with Angel for his double standards and his further neglect of Tess.

I was annoyed with Tess for not standing up for herself, for being so complacent and accepting. She never called her parents or Angel to account for their poor treatment of her. And her bottled up anger at Alex proved to be,ultimately, self-destructive.

By the end of the book I was so upset with Thomas Hardy for his pessimistic view on life, his harsh treatment of women and his god-damned meandering around the countryside that I wanted to throw the book in his face!!

All of the above would suggest that I didn't like or enjoy my rereading of Tess.
But that is not true at all.

The first half of the book was wonderful. It was engaging, infuriating and thought-provoking in equal measure.
I dog-eared several pages and made lots of notes against passages that resonated or stood out from the crowd.

For example:
pg 46: In the ill-judged execution of the well-judged plan of things the call seldom produces the comer, the man to love rarely coincides with the hour for loving.

pg 116: She suddenly thought one afternoon, when looking in the glass at her fairness, that there was yet another date, of greater importance to her than those; that of her own death, when all these charms would have disappeared; a day which lay sly and unseen among all the other days of the year, giving no sign or sound when she annually passed over it; but not the less surely there. When was it?...Of that day, doomed to be her terminus in time through the ages, she did not know the place in month, week, season or year.

But by the end I was definitely over Hardy's gloomy view of the world.

Fortunately I also had a copy of Claire Tomalin's bio of Hardy on hand - I thought this would help me understand where Hardy was coming from.

There were a number of interesting facts. 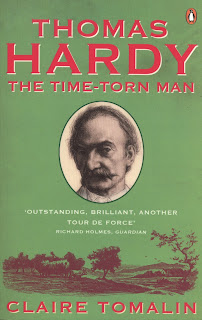 2. Tomalin suggests that Hardy's black view of the world came from his "constitution (which) made him extraordinarily sensitive to humiliations, griefs and disappointments, and that the wounds they inflicted never healed but went on hurting him throughout his life. In a sense too he never got over his loss of Christian belief, which removed hope."

3. Tess started off with the names Love, Sue and Cis Troublewell!

4. Tess was serialised in a highly edited and expurgated version in 1891. Hardy had lots of conflict with editors and critics at various stages of Tess' creation. When the book was finally published he restored all of the cut sections. Tomalin suggests that this protracted and complicated writing & publishing history accounts for some of the "unevenness in the writing."

5. Hardy spent many of his married years to Emma, his first wife, in "estrangement and mutual hostility". In his 50's he fell in love with a married women who rejected his advances. Ten years later he then fell in love with a young school teacher 50 years younger than himself! When Emma died, he eventually married the young school teacher, Florence but wrote a series of poems dedicated to the memory of Emma and their early love! Clearly, Hardy had some issues surrounding his relationships with women.

Tess is definitely a classic despite its many flaws.

Hardy "sets out to show the crushing of its innocent heroine by the society in which she lives, its Christian hypocrisy, its double standard, its exploitation of cheap labour, all combining to reduce her to desperation, so that she ends her life as a ritual sacrifice to society's values."  And with this he succeeds.

The source of my anger arose from Hardy's depiction of exactly these concerns.
He also shows us the Dorset countryside in all its beauty. Hardy points out his concerns for the changing landscape - the move to bigger cities, the temporary nature of work and residence and its negative effects on community and family life and absent landlords who exploit the land.

Tess was written as a wake-up call for the people of its time. Hardy intended to shock and upset. The fact that he could still shock and upset this reader over a hundred years later suggests that his message remains relevant to this day.
Posted by Brona Labels 1001 Books, CC Spin, Classic at 1.7.13
Email ThisBlogThis!Share to TwitterShare to FacebookShare to Pinterest