The Odyssey by Homer #2

I first read The Odyssey when I was in my final year of school.

I was studying Ancient History and I had the (bad) habit of not only reading my required texts but also all the optional extra texts from start to finish...just for fun! My Ancient History teacher was delighted, but the rest of my subjects suffered from this little obsession.

Five years later, I took off overseas to work in London and travel around as much of Europe as I could afford to in the 10 months I had up my sleeve. Space was an issue in my luggage. The one book that took the entire trip with me was my prose penguin edition of The Odyssey. I borrowed, bought and released untold numbers of other book whilst traveling, but Homer was my constant companion.

Fortunately my traveling adventures shared nothing in common with Odysseus. The most hardship I endured was 6 months nannying a rather horrid 6 year old, a nasty tummy bug in Egypt and breaking up long distance with my boyfriend (the same boyfriend who became my husband 18 years and many, many adventures later!)

Any discomfort with Youth Hostel beds, or annoyance at smoke filled over-heated buses, late trains or currency exchange rates paled into insignificance every time I picked up The Odyssey. Certainly, there was one YH manager in Scotland that could have been mistaken for a modern day Cyclops and one young man at a Hyde Park concert that had nymph-like tendencies! But I made it home safe and sound with lots of wonderful memories and in a timely fashion.

This readalong has given me a chance to rehash old times as well as creating new ones thanks to my first reading of a verse edition of The Odyssey.

I have found it interesting to compare the two versions as I go along (below).
The Fagles verse is definitely more poetic whilst Rieu's translation can be quite prosaic and pragmatic.

"You are no longer a child: you must put childish thoughts away." (pg 34) 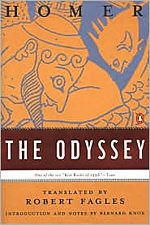 Book 2: "Few sons are the equal of their fathers;
most fall short, all too few surpass them.
But you, brave and adept from this day on -
Odysseus' cunning has hardly given out in you -
there's every hope that you will reach your goal."   (lines 309- 312)

"Few sons, indeed, are like their fathers. Generally they are worse; but just a few are better. And since we have seen that you are by no means lacking in Odysseus' wits, and that no fool's or coward's role awaits you in life, why then, you have every reason to feel that you will make a success of this undertaking." (pg 45)

"...when you Achaeans boldly declared war and took the field against Troy for my sake, shameless creature that I was!"   (pg 68)

"Indeed, what other tribute can one pay to poor mortality than a lock of hair from the head and a tear on a cheek?" (pg 69)

Book 6: "And out he stalked
as a mountain lion exultant in his power
strides through wind and rain and his eyes ablaze" (lines 142-144)

"Then he advanced on them like a mountain lion who sallies out, defying wind and rain in the pride of his power, with fire in his eyes." (pg 105)

I've included Helen's line in Book 4 about being a "shameless whore" because this struck me like a slap on the cheek. It reminded me that this book was written (and before that told) in a time when the lives of men were paramount. Women's issues and stories were only told in relation to what was important to men.

My stance on 'his'tory and 'her'story has changed over the last twenty years, but my enjoyment of this rolicking story has not.

Bring on the second half!