The Stalking of Julia Gillard by Kerry-Anne Walsh 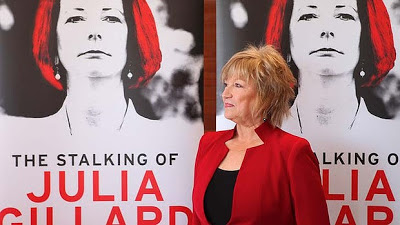 Topical, relevant and a publishers dream as far as timing goes!

The Stalking Of Julia Gillard: How Team Rudd contrived to bring down the Prime Minister was due for August release.

Walsh initially planned to document the Gillard governments minority parliament, the first one in Australia since 1939. But she noticed, that despite a "parliament...functioning remarkably well under Gillard leadership" that the media and a minority within the Labor caucus were "threatening to derail its success".

So the book became about "Team Rudd's slow-death destabilisation campaign  against Gillard" and about the media's focus on all things Rudd. Walsh claims that her book is not a defence of Gillard or a definitive account of the Gillard government. She also never spoke to Gillard about her book. Instead "it's an expanded personal diary of observations."

At the end of June, Rudd was finally successful in getting the numbers to topple Gillard as leader of the Labor party. 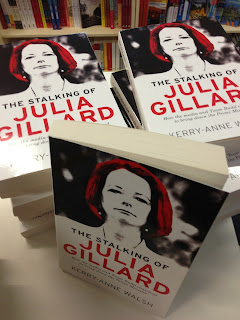 Allen and Unwin decided to bring forward the release of Walsh's book to catch the wave of interest in this leadership change.
The Stalking of Julia sold out within a week.
The reprint (and amended past-tense title) came out a week later and is still racing off the shelf three weeks later.

I'm glad I read Summer's The Misogyny Factor first. It was well researched and told in a calm, restrained fashion.

Walsh's book is far from calm or restrained.

She is obviously anti-Rudd. But she is also scathing in her comments about members of the media who supported Rudd is his three year campaign to undermine Gillard at every turn. Whether via personal attacks, beautifully timed leaks to take attention away from any positive press about her government and the courting of Rudd and his agenda at the expense of reporting government policy.

Although there are many interesting insights in Walsh's book, I found it difficult to trust them. I felt that her red hot anger took away from her objectivity. Her many derisive comments ended up putting her in the same group as the shock jocks to my mind.

When people start name calling, I tend to tune out, regardless of their politics or beliefs.

If you want to read a sensational account of the Gillard government - then read this book.

If you would prefer a calmer, rational, more balanced argument - then read Anne Summer's book (see my review below).