Fortunately, The Milk... by Neil Gaiman 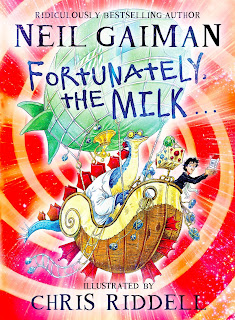 I've been meaning to read another Gaiman ever since I read and adored
Coraline. That was five years ago.

Fortunately, the Milk... is a ridiculously tall tale full of pirates, aliens, wumpires and talking time-travelling dinosaurs. Yes, the inside of Neil Gaiman's head is an interesting place to be!

I was enjoying the story and the detailed illustrations by Chris Riddell until ... a QR code appeared on the page as the dad was about to walk the plank with his milk. A note said to scan it to hear Gaiman reading from this page. So I did.

I went from enjoying this tall tale to LOVING it!

From that point on, the rest of the story played out in my head in Gaiman's voice. His voice gave the story added humour, complexity and richness.

Is this the future of books? Interactive codes that link to youtube videos and websites?

Fortunately, The Milk...  is certainly an example of where this works well and where it adds something of value to the reading experience.

And is it just me...or does the dad in Chris Riddell's illustrations look remarkably like Gaiman himself?

Fortunately, The Milk... is due for release in September through Bloomsbury.
It's perfect as a read aloud story for the 4+ market or as an early reader for 6+ students.
Posted by Brona Labels Adventure, Fantasy, Humour, Younger readers at 4.8.13
Email ThisBlogThis!Share to TwitterShare to FacebookShare to Pinterest