This week's Friday Flashback (hosted by Lisa at Bookshelf Fantasies) is one of my all-time favourite past Booker winners (1981).

It was my first attempt to read anything by Salmon Rushdie.

It was also one of those books that evoked a sense of place so strongly that I still feel myself back there simply by talking about it.
But by back there, I don't just mean India.

I mean Perth, Margaret River and Denmark in southern WA!

Midnight's Children was the book I took on my 2 week holiday to Perth in 1999. I was visiting a dear school friend and her family at the time. I was able to use her home as a base from which I went on a few day trips and extended excursions.

For me, Midnight's Children became this strange parallel universe that I travelled through in my mind even as my eyes took in the incredible sights and sounds of WA for the first time. 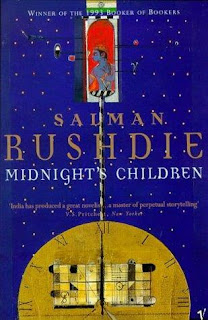 I remember certain B&B's, cafe's, bushwalks and even a boat trip in Denmark that have become intricately enmeshed with scenes and characters from the book.

I was enthralled, mesmerised even by Rushdie's writing. I loved the mix of historical fiction and fantasy. I adored his discussion on time, history, truth & memory.

“I fell victim to the temptation of every autobiographer, to the illusion that since the past exists only in one's memories and the words which strive vainly to encapsulate them, it is possible to create past events simply by saying they occurred.”

I made notes, jotted down quotes and my travel journal became a weird mix of travelogue and book review.

Midnight's Children began a personal phase of reading all things India that lasted quite a few years & included lots of memorable books like A Passage to India, The God of Small Things, A Suitable Boy, Interpreter of Maladies, Fasting, Feasting & Journey to Ithaca just to name a few!

“Reality is a question of perspective; the further you get from the past, the more concrete and plausible it seems - but as you approach the present, it inevitably seems more and more incredible.”