The Classics Club is hosting a new year long Meme called Twelve Months of Classic Literature.
The January question asks us to reflect on the life and times of Shakespeare.

My lazy summer schedule has not allowed for serious reflection on any topic whatsoever. But I felt the urge to participate, so I've decided to go for the cheats post on Shakespeare.

In 2007, Mr Books & I had a wonderful 2 weeks travelling around the UK.
We both love seeing Shakespeare performed live, so I arranged tickets for us to see The Merchant of Venice at the new Globe Theatre in London for Mr Books birthday.

We also spent a day in Stratford-on-Avon where we soaked up as much Elizabethan culture as we could handle!

The first 4 photos are of the Gower Memorial in Bancroft Gardens in Stratford (1888). Shakespeare sits on top of the pedestal and is surrounded by bronzes of Lady Macbeth, Hamlet, King Hal & Falstaff (Philosophy, Tragedy, Comedy & History). 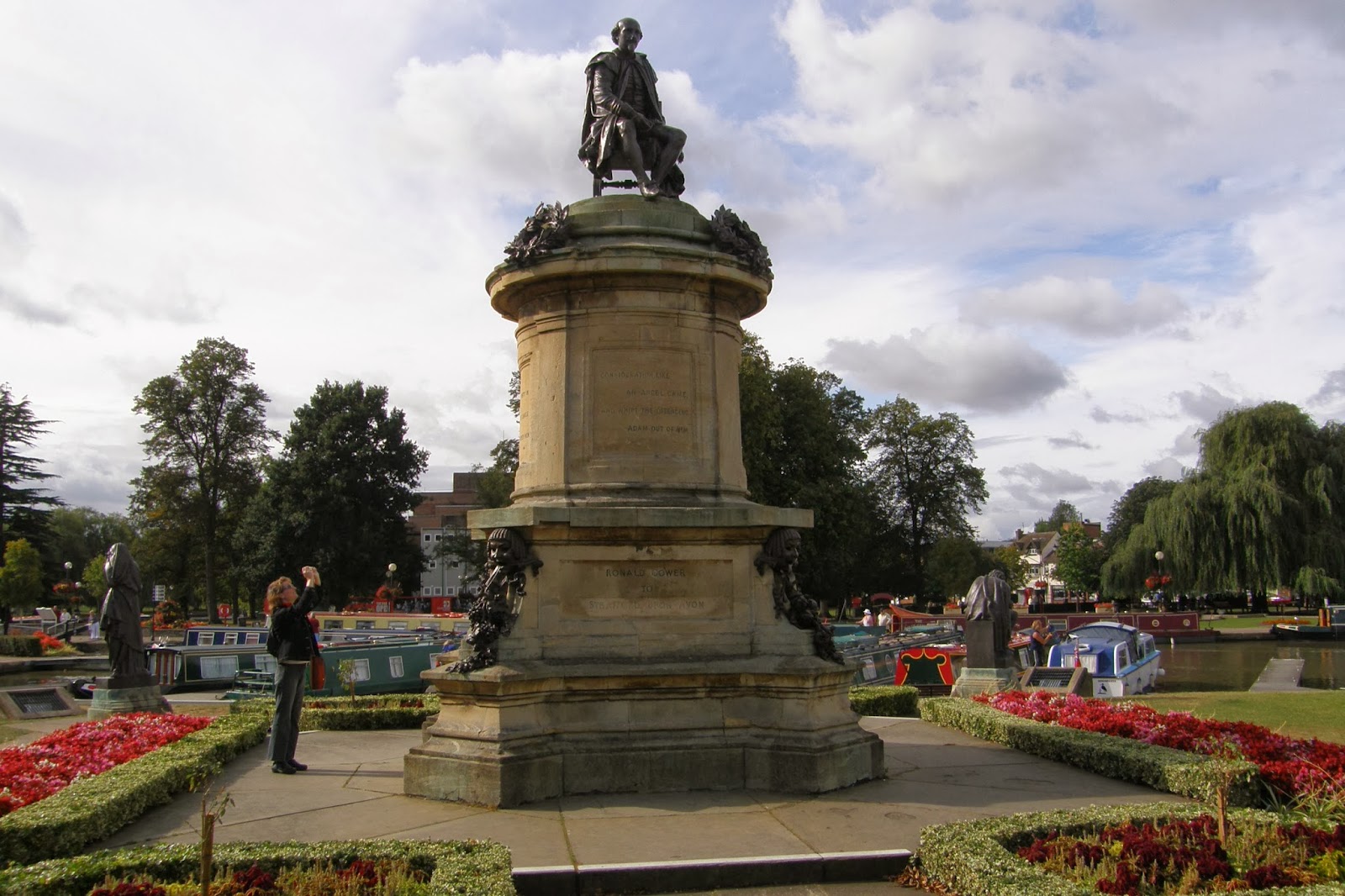 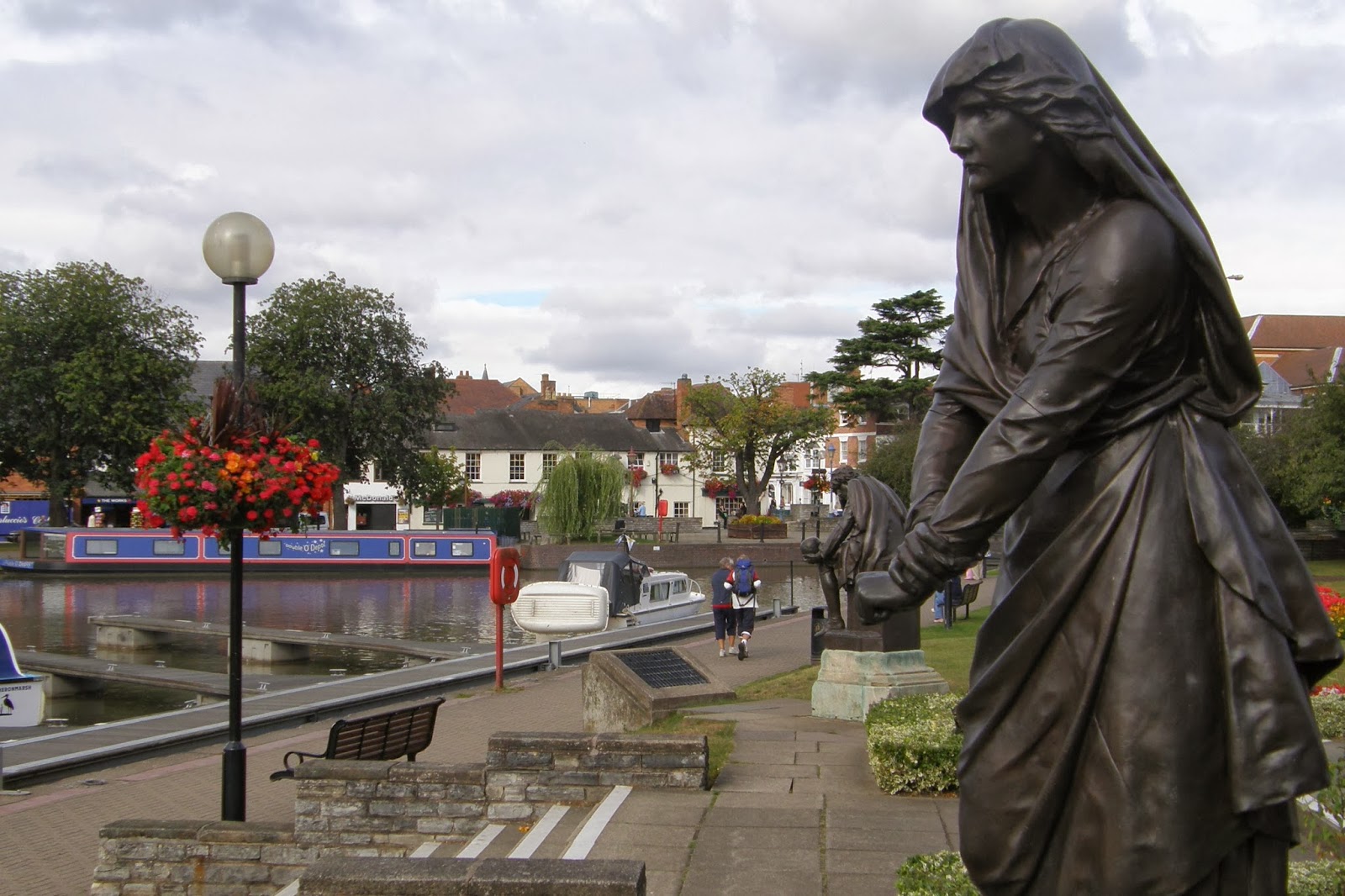 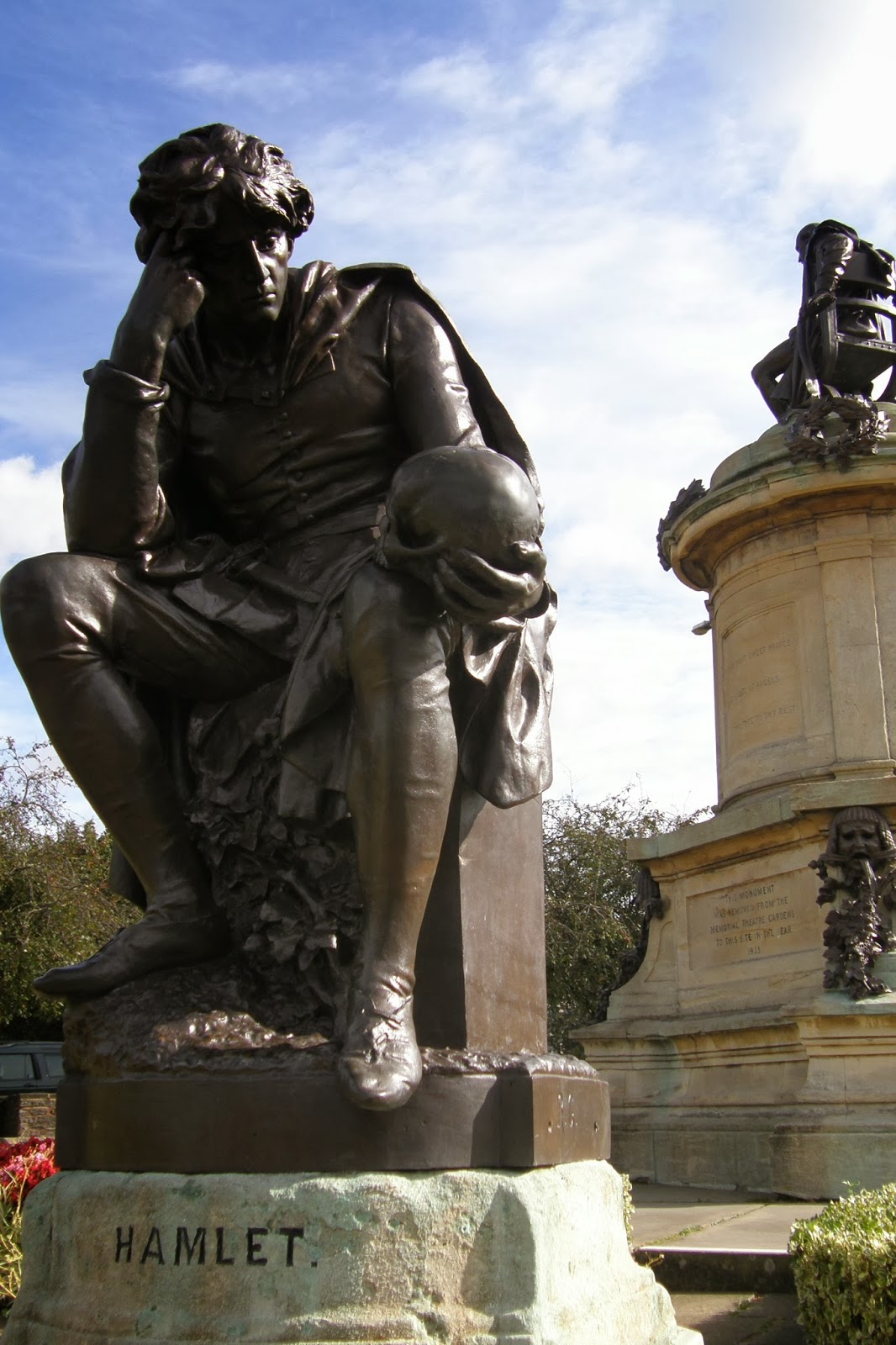 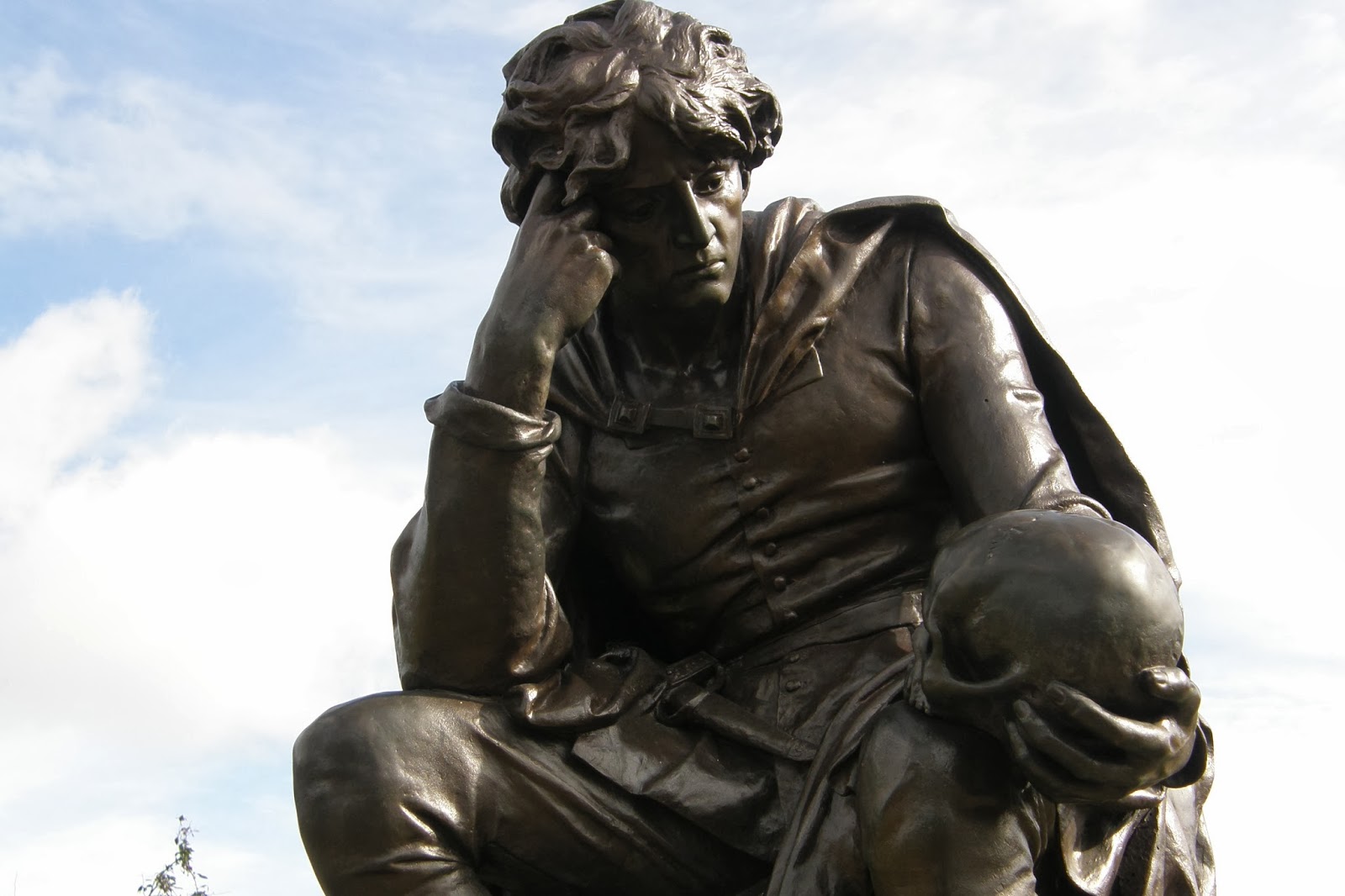 The half-timbered house in Henley Street (below) is supposedly where Shakespeare was born in 1564. It has been lovingly restored whilst retaining original details like sloping, uneven floors, narrow steps, dim lighting and low beams. Each room is furnished in the style of the time with lots of information points for the dedicated. The gardens (in September) were a glorious riot of colour. 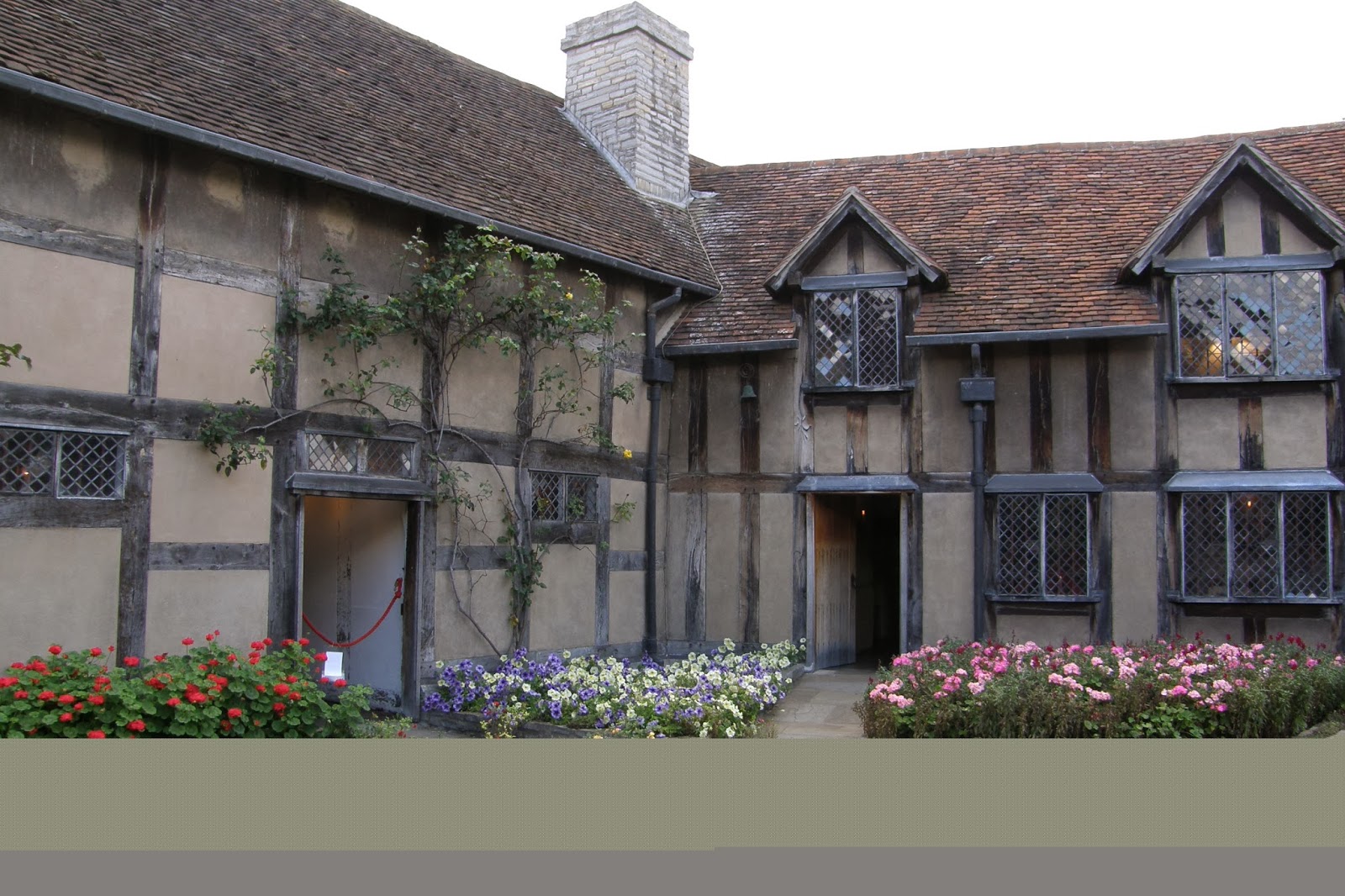 New Place on Chapel Street was Shakespeare's home from 1597 until his death. Sadly the house was demolished a hundred years later, but the foundations & grounds can still be viewed. Nash House (next door) is now the entrance to the site. It was owned by Thomas Nash who married Shakespeare's granddaughter, Elizabeth. It has a display of furniture and information about the history of Stratford. The second photo (below) also shows the beautiful Guild Chapel in the background overlooking New Place. 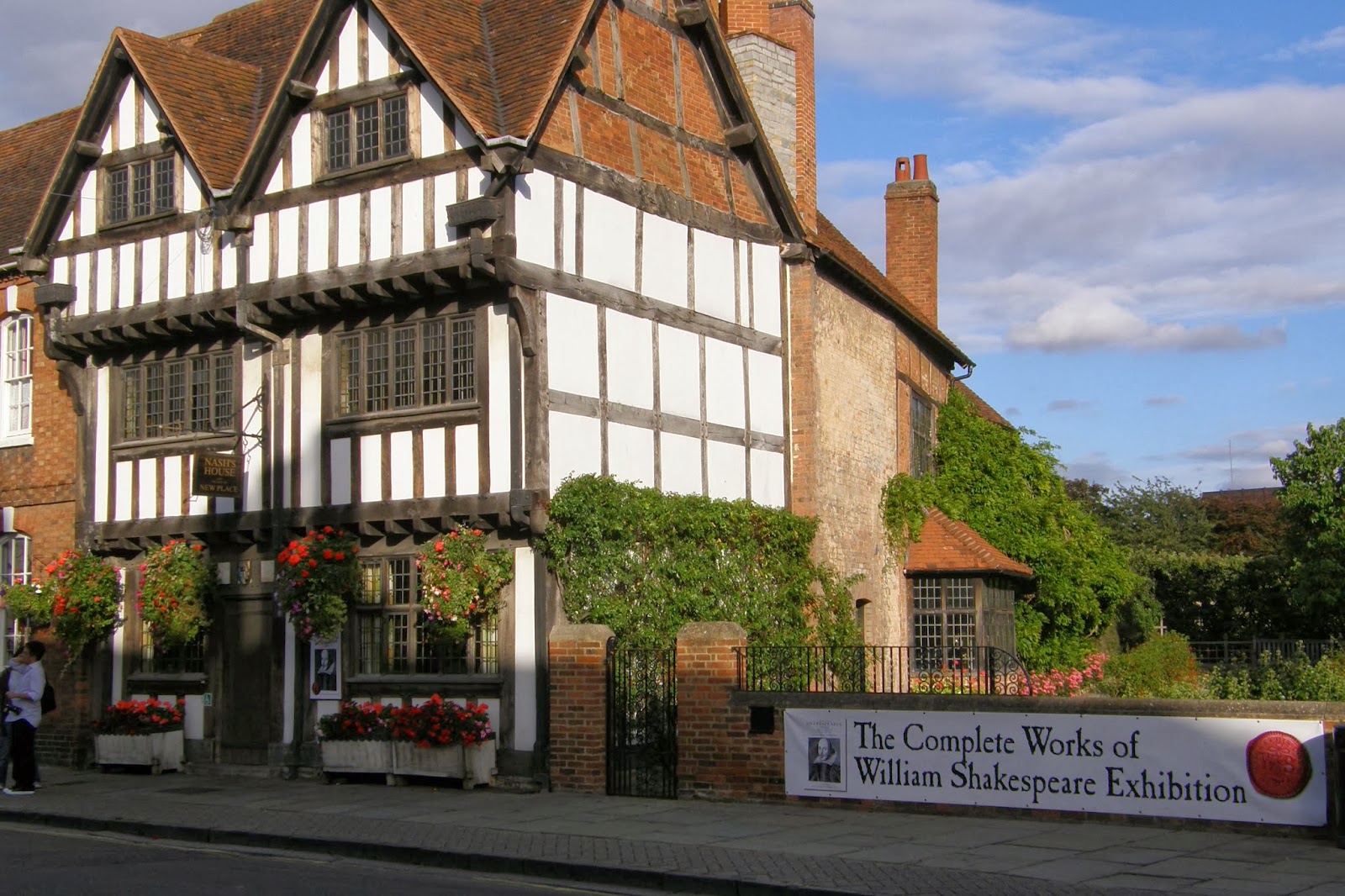 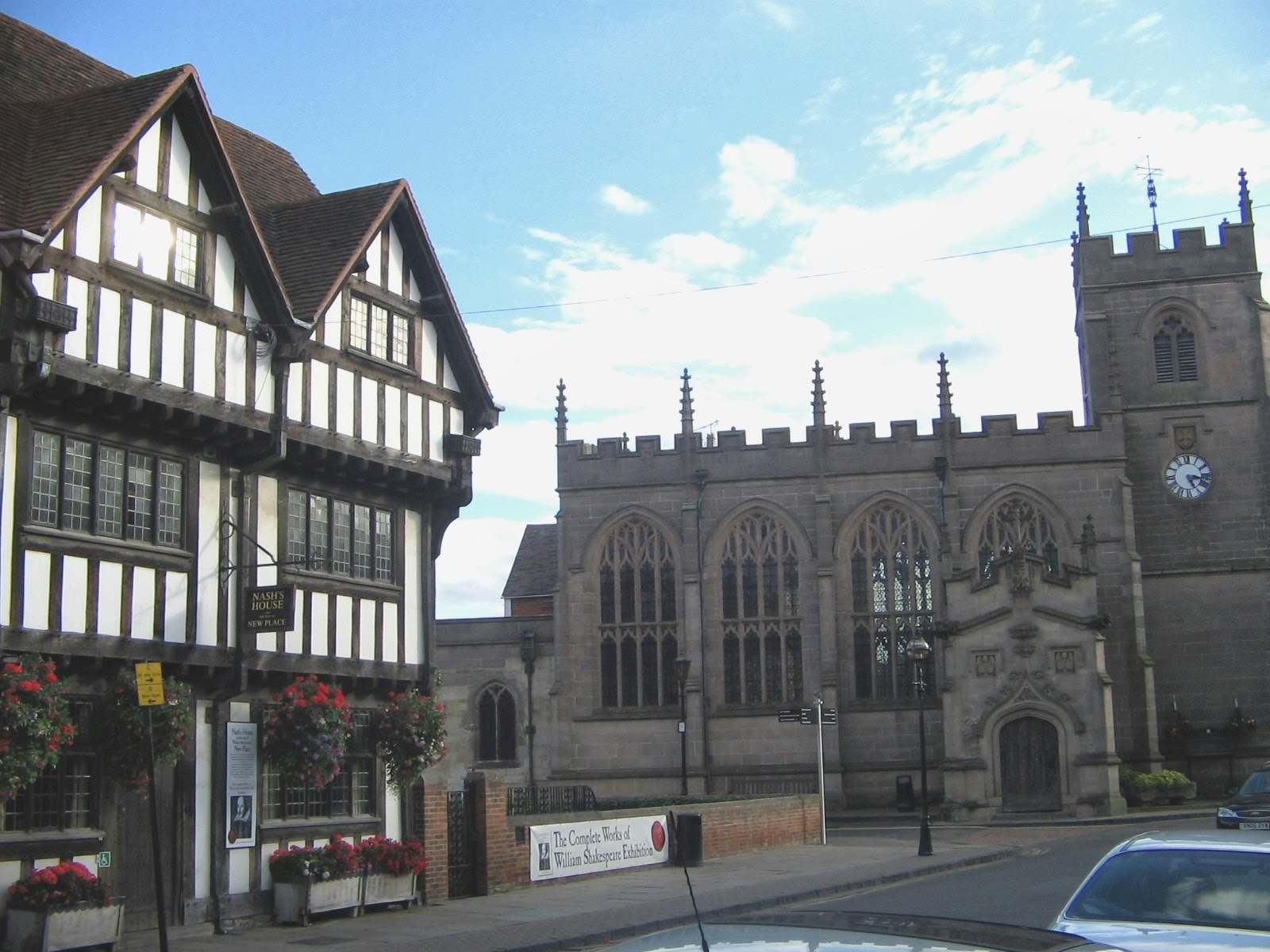 The original Globe Theatre, in London was built in 1599. The modern Shakespeare Globe was opened in 1997, about 230m from the original site. We payed a little extra to sit in one of the bays (they're undercover & we didn't want to trust to the English weather!), but you are allowed (& encouraged) to move around before, during and after the performance.

It was incredible to be so close to the action and was definitely one of the highlights of our trip. For anyone travelling to London from overseas, I cannot recommend this experience highly enough. It was easy to book the tickets online, before our departure. And we were very fortunate that Mr Books all-time favourite Shakespeare (The Merchant of Venice) was being performed the week we were in London. 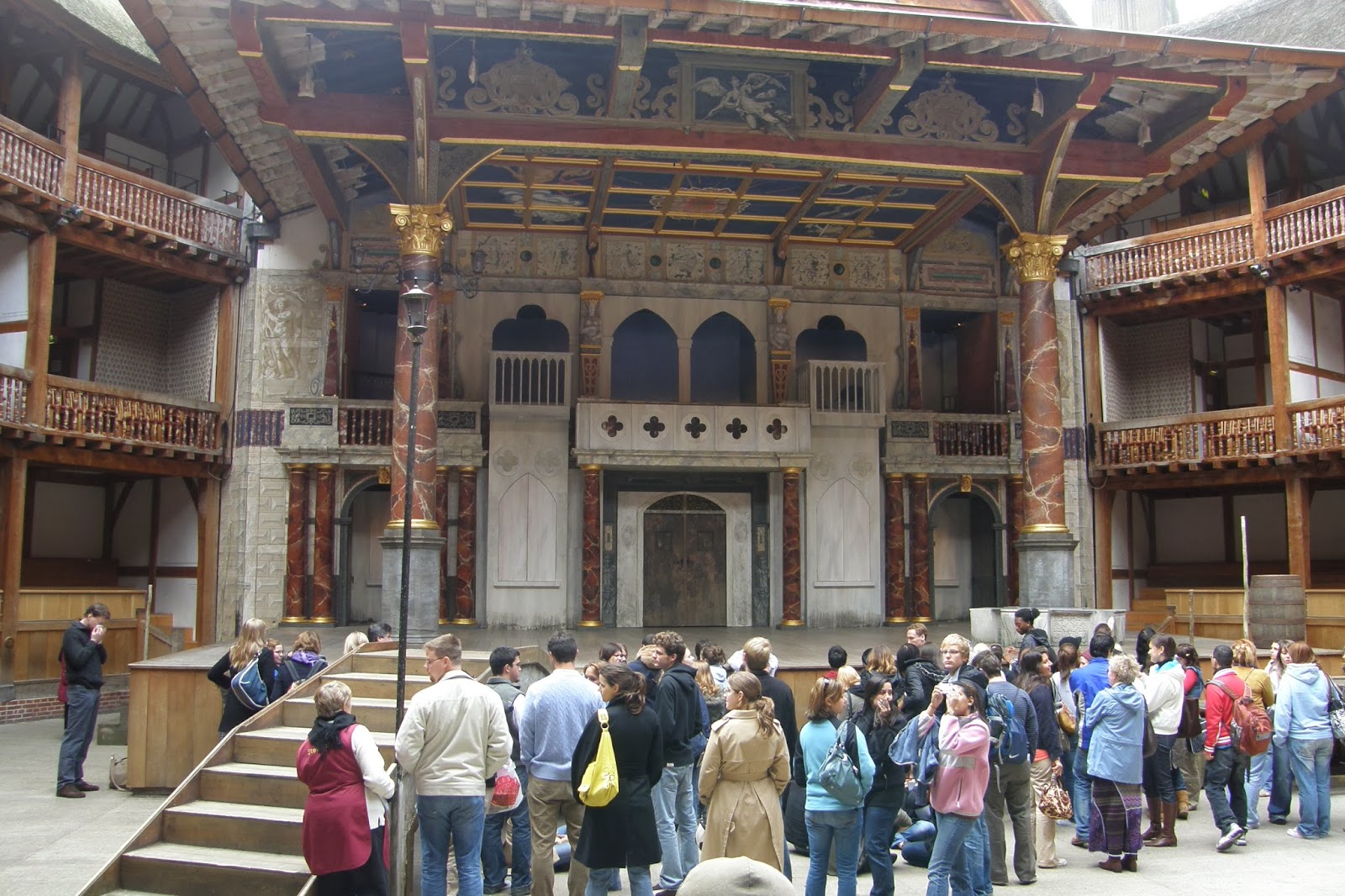 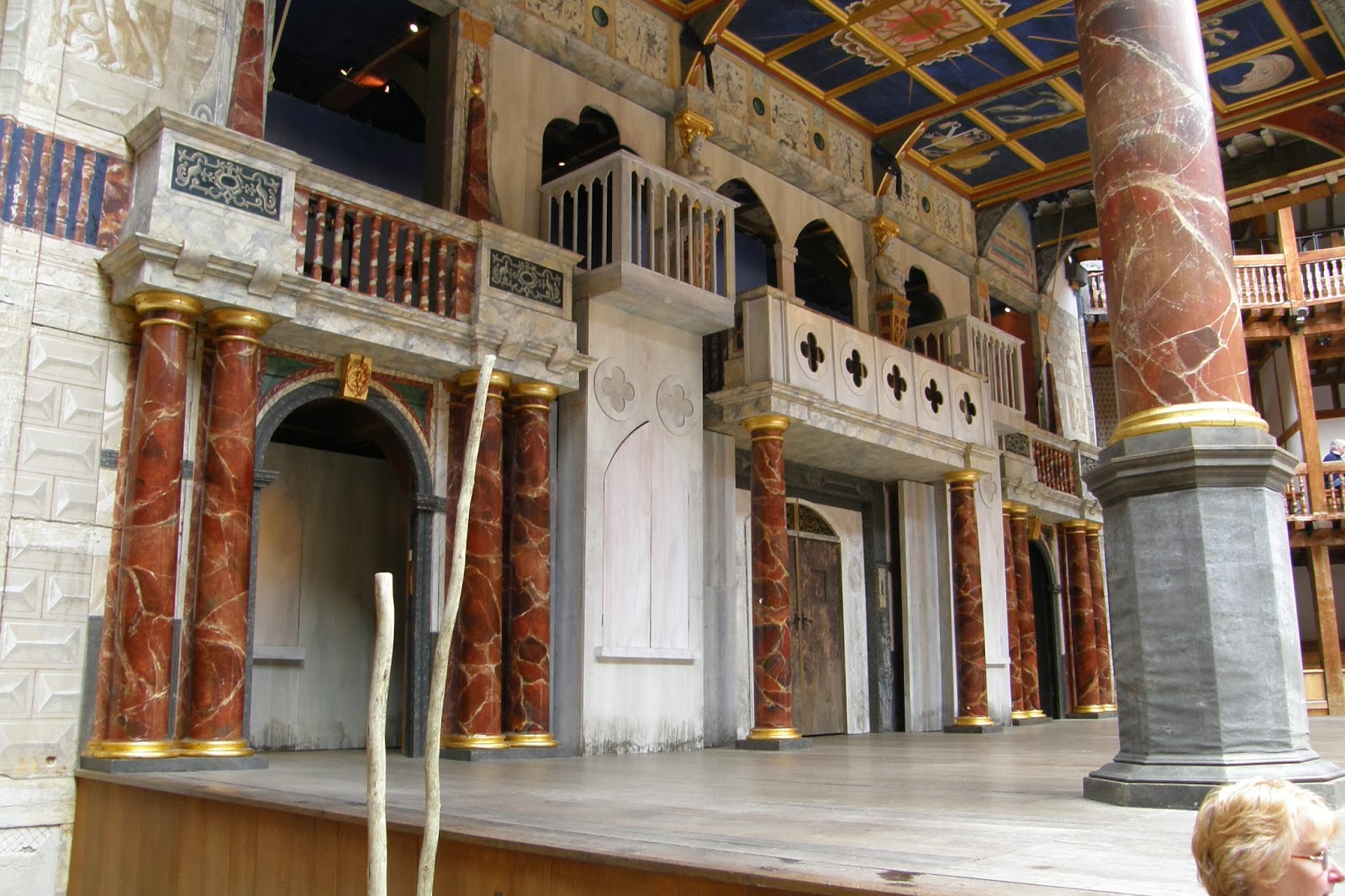 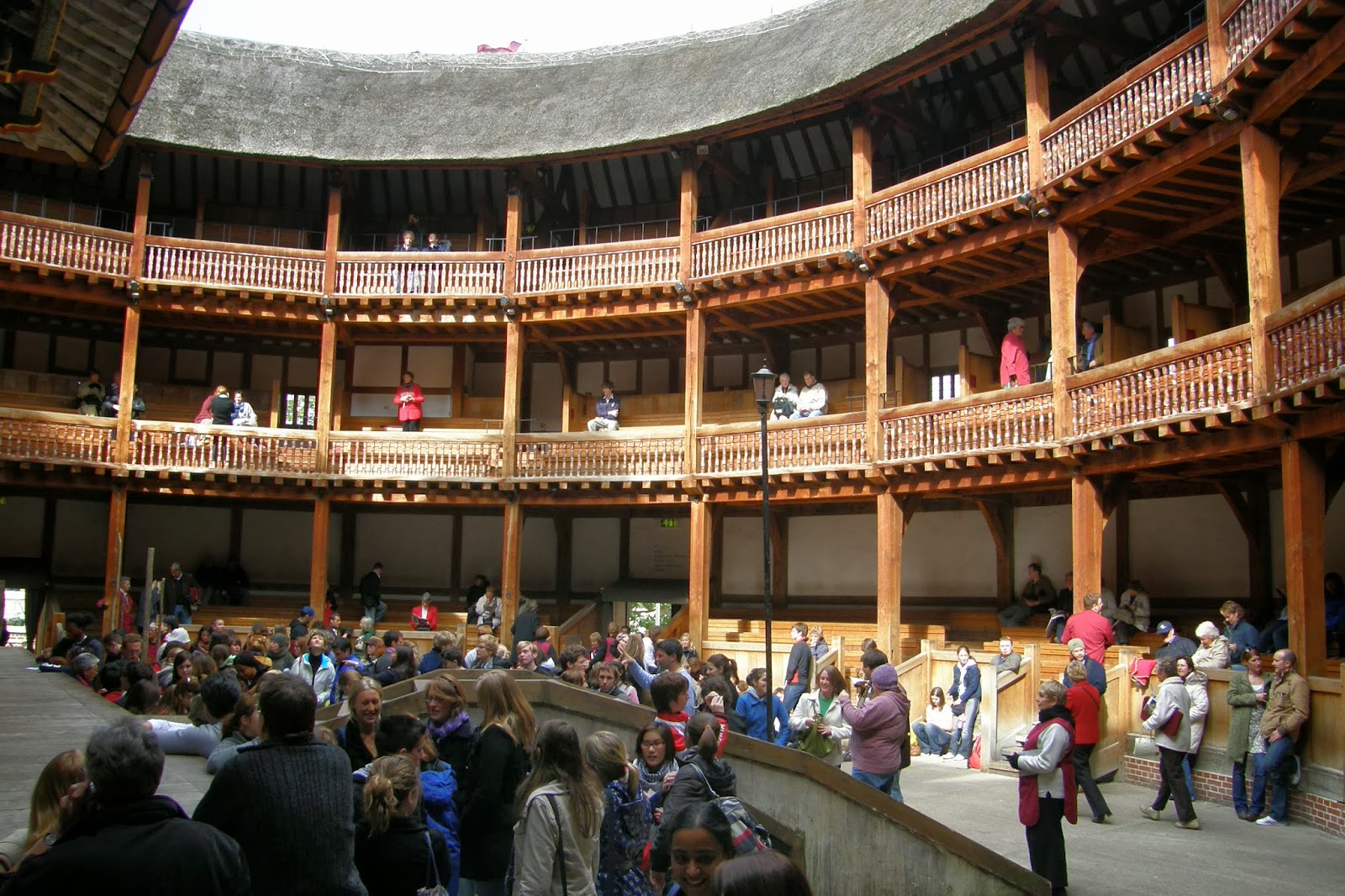 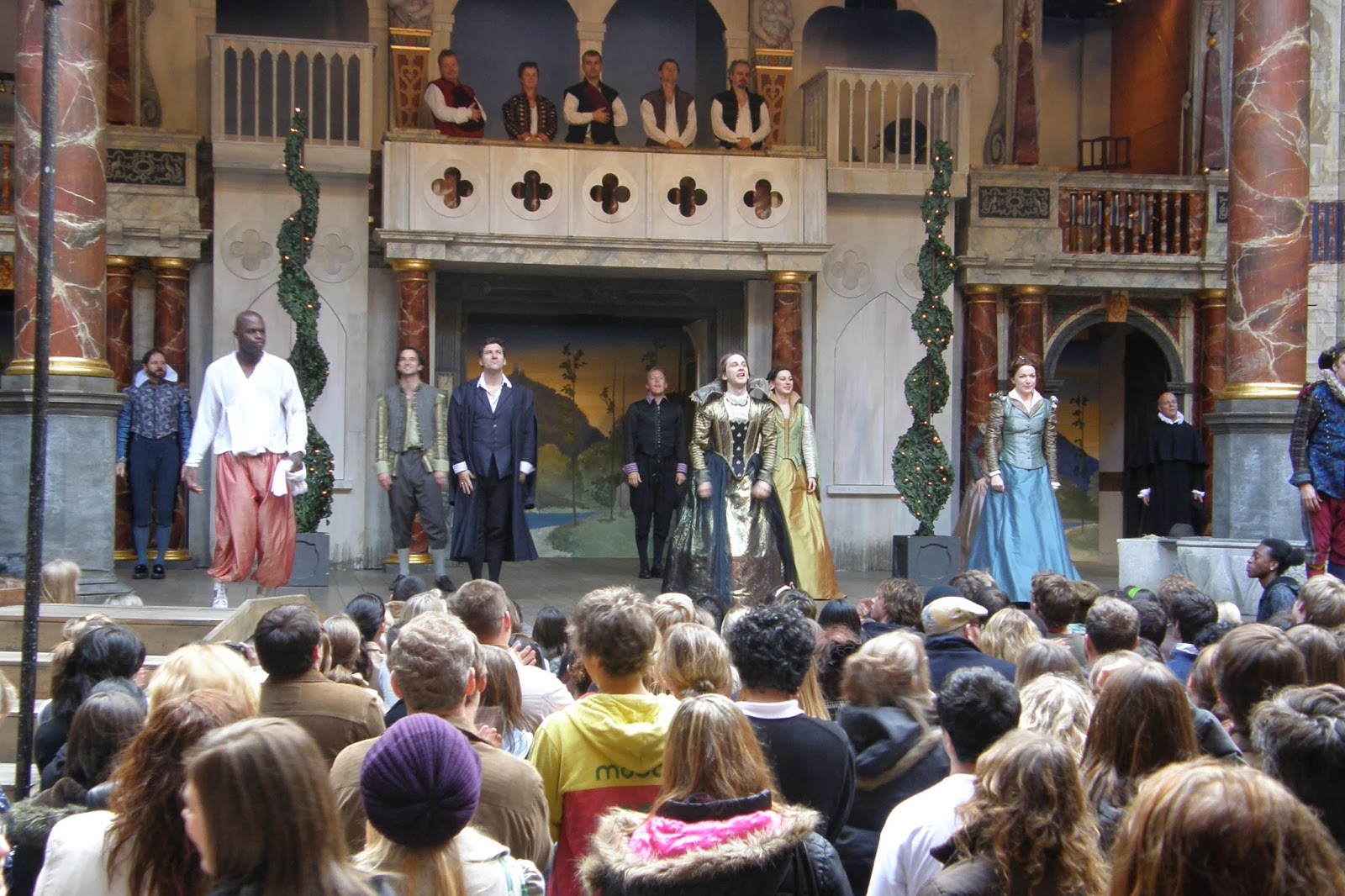 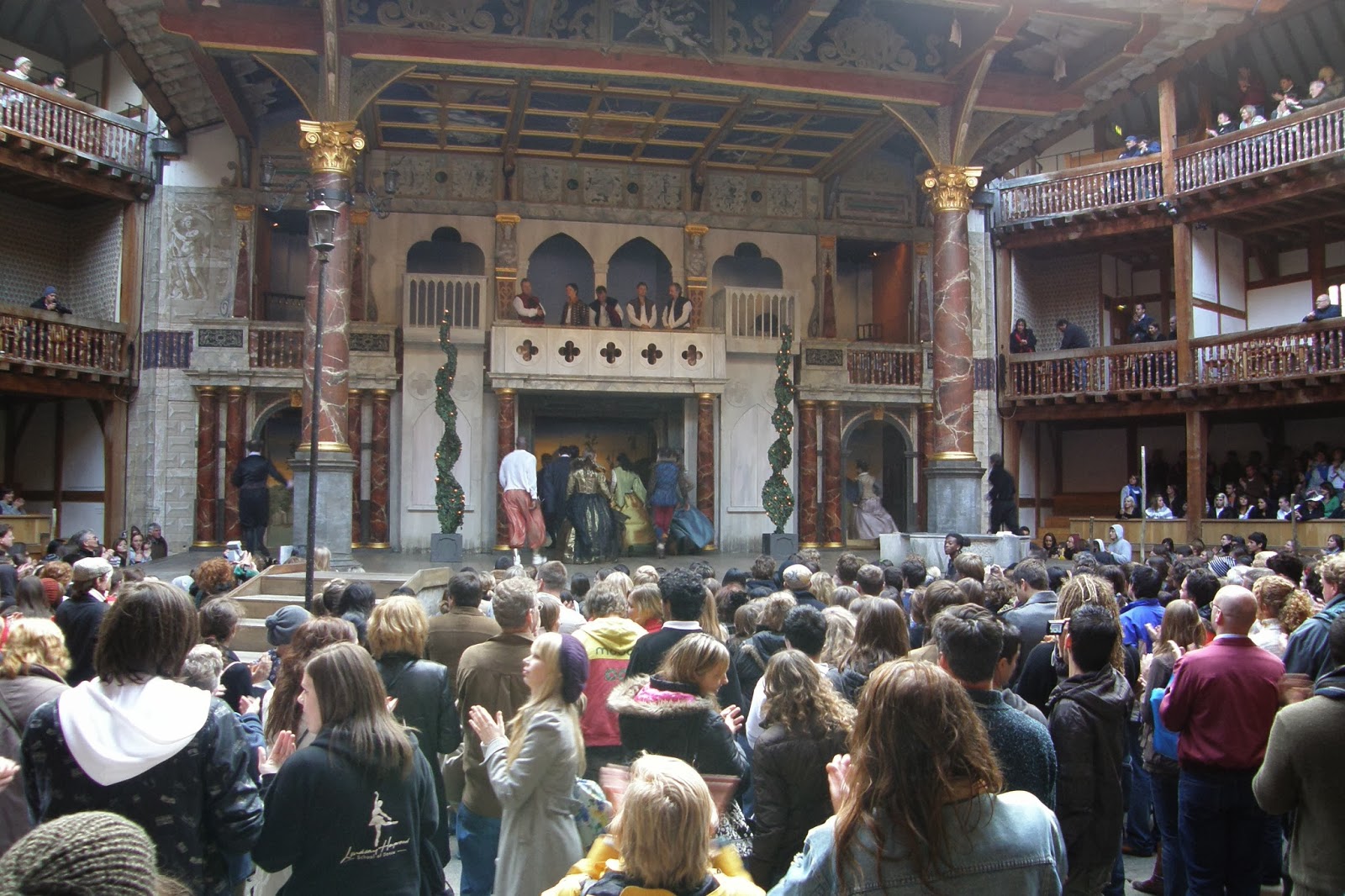 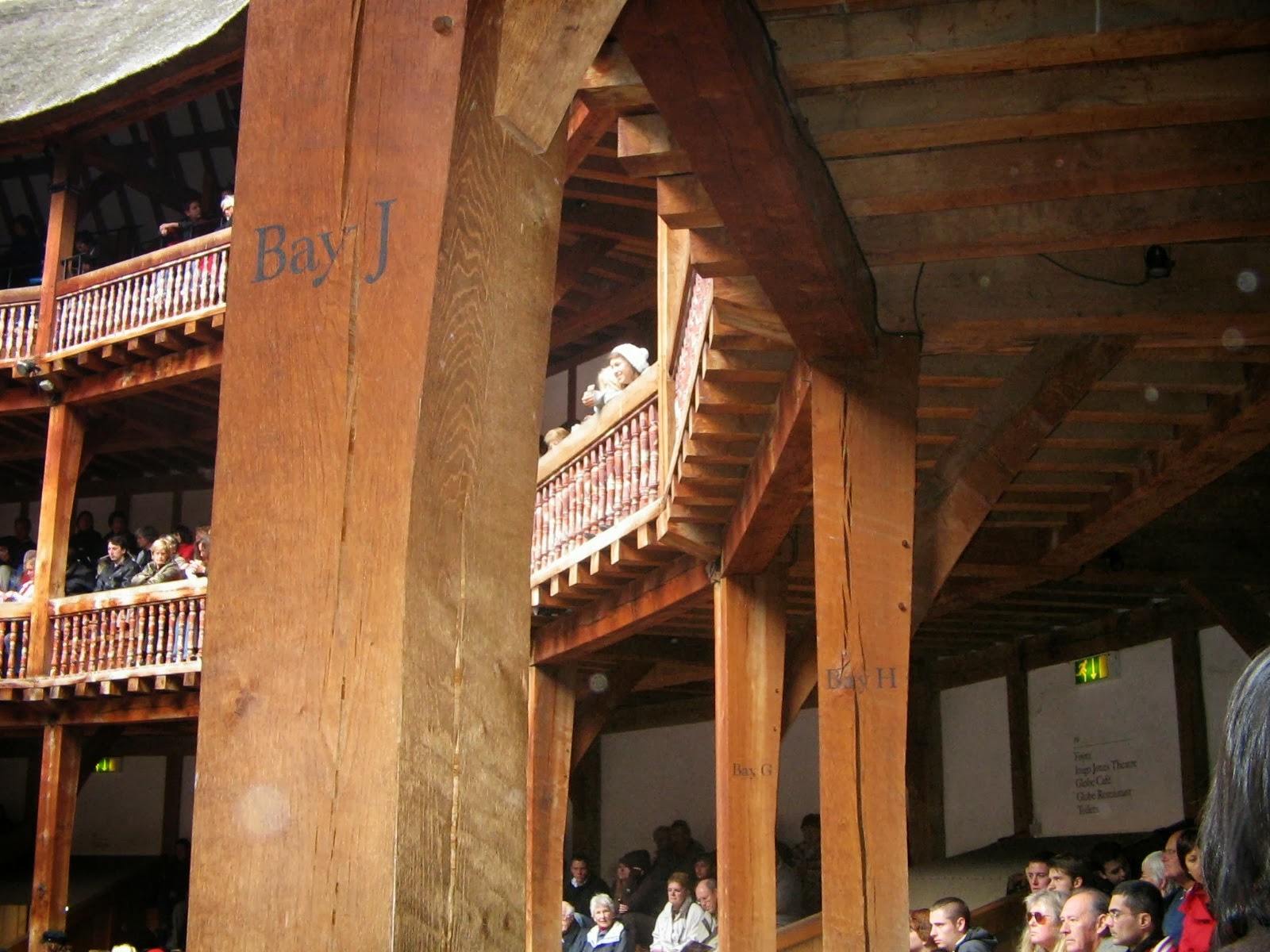 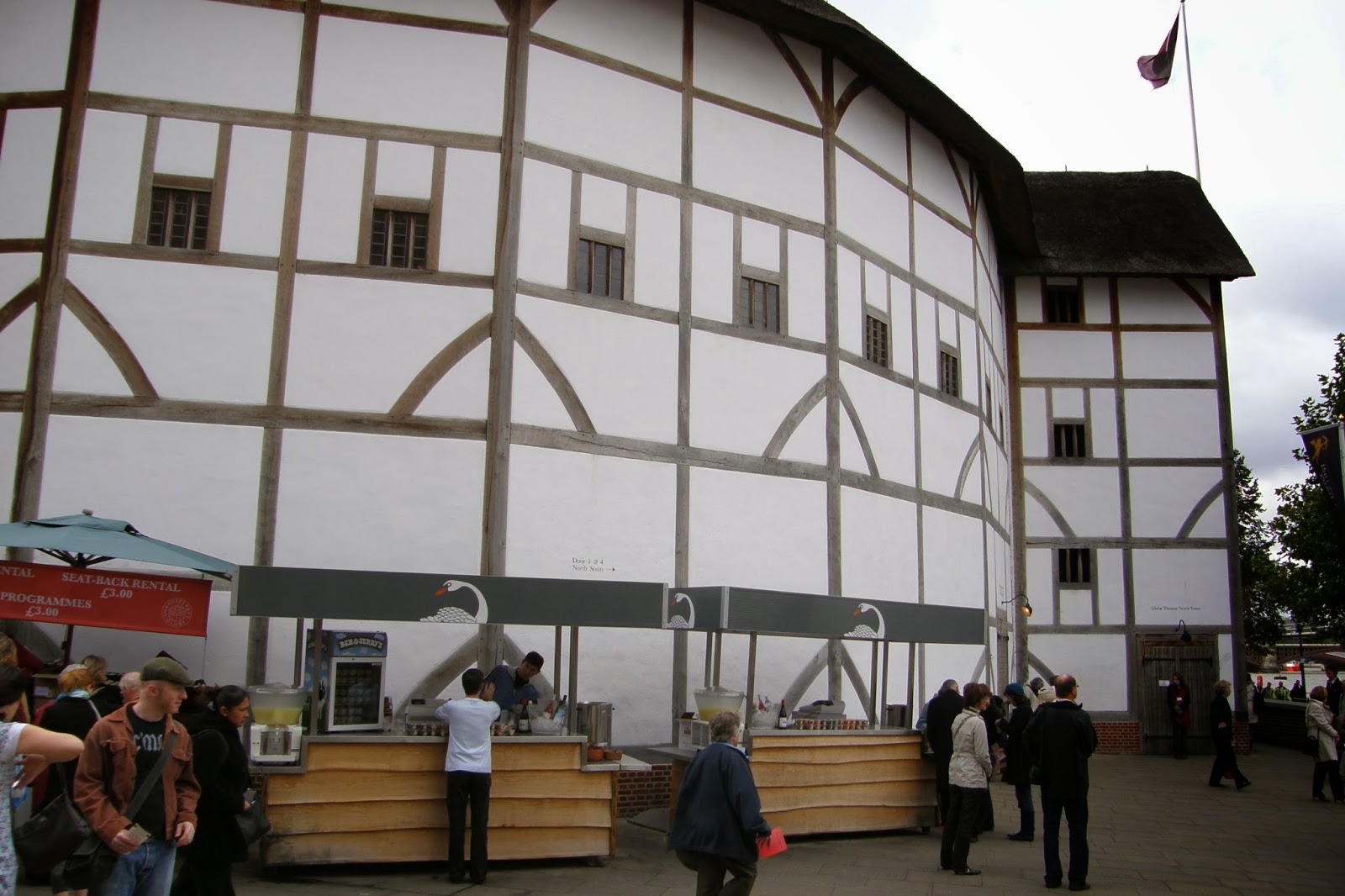 Since my highschool days when I watched numerous versions of Romeo & Juliet, The Merchant of Venice, Macbeth & King Lear for my studies, I have seen untold numbers of Shakespearean performances on stage, in the park and at the movies.

Some of the highlights have been Romeo & Juliet in the Botanic Gardens, Melbourne, Kevin Spacey as Richard III at the Sydney Opera House, Baz Luhrman's movie of Romeo & Juliet and The Merchant of Venice at the Globe Theatre.

Do you have a favourite performance?
Posted by Brona Labels Shakespeare, Twelve Months of Classic Literature at 29.1.14
Email ThisBlogThis!Share to TwitterShare to FacebookShare to Pinterest