100 Novels Everyone Should Read

I spotted this list of 100 books in a Telegraph online article from the 20th June.

It had a good mix of books I've read and loved, a few so-so's and quite a few unknowns.

But most of all, each book was accompanied by a one line quirky summary. 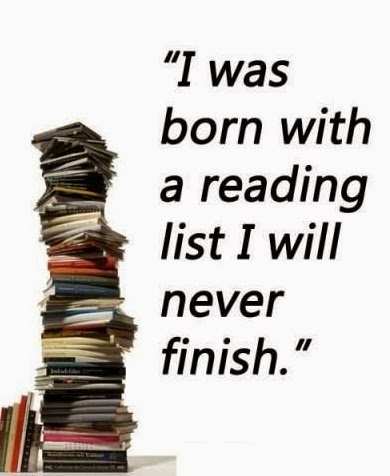 Please feel free to leave your ideas below in the comments, but for now,
here is the Telegraph's '100 Novels Everyone Should Read'...

WH Auden thought this tale of fantastic creatures looking for lost jewellery was a “masterpiece”.

99 To Kill a Mockingbird by Harper Lee (R)

A child’s-eye view of racial prejudice and freaky neighbours in Thirties Alabama.

98 The Home and the World by Rabindranath Tagore (R)

Earth is demolished to make way for a Hyperspatial Express Route. Don’t panic.

96 One Thousand and One Nights Anon

Werther loves Charlotte, but she’s already engaged. Woe is he!

The children of poor Hindus and wealthy Muslims are switched at birth.

Hilarious satire on doom-laden rural romances. “Something nasty” has been observed in the woodshed.

91 The Tale of Genji by Lady Murasaki

The life and loves of an emperor’s son. And the world’s first novel?

A feckless writer has dealings with a canine movie star. Comedy and philosophy combined.

89 The Golden Notebook by Doris Lessing

Passion, poetry and pistols in this verse novel of thwarted love.

87 On the Road by Jack Kerouac

85 The Red and the Black by Stendhal

Plebian hero struggles against the materialism and hypocrisy of French society with his “force d’ame”.

84 The Three Musketeers by Alexandre Dumas

“One for all and all for one”: the eponymous swashbucklers battle the mysterious Milady.

82 The Stranger by Albert Camus

Frenchman kills an Arab friend in Algiers and accepts “the gentle indifference of the world”.

81The Name of the Rose by Umberto Eco

Prequel to Jane Eyre giving moving, human voice to the mad woman in the attic.

76 The Trial by Franz Kafka

K proclaims he’s innocent when unexpectedly arrested. But “innocent of what”?

75 Cider with Rosie by Laurie Lee

Protagonist’s “first long secret drink of golden fire” is under a hay wagon.

74 Waiting for the Mahatma by RK Narayan

Gentle comedy in which a Gandhi-inspired Indian youth becomes an anti-British extremist.

73 All Quiet on the Western Front by Erich Remarque

The horror of the Great War as seen by a teenage soldier.

72 Dinner at the Homesick Restaurant by Anne Tyler (R)

Three siblings are differently affected by their parents’ unexplained separation.

71 The Dream of the Red Chamber by Cao Xueqin

Garibaldi’s Redshirts sweep through Sicily, the “jackals” ousting the nobility, or “leopards”.

International book fraud is exposed in this playful postmodernist puzzle.

67 A Bend in the River by VS Naipaul

East African Indian Salim travels to the heart of Africa and finds “The world is what it is.”

66 Crime and Punishment by Fyodor Dostoyevsky

Romantic young doctor’s idealism is trampled by the atrocities of the Russian Revolution.

64 The Cairo Trilogy by Naguib Mahfouz

Follows three generations of Cairenes from the First World War to the coup of 1952.

Stevenson’s “bogey tale” came to him in a dream.

61 My Name Is Red by Orhan Pamuk

A painter is murdered in Istanbul in 1591. Unusually, we hear from the corpse.

60 One Hundred Years of Solitude by Gabriel García Márquez (R)

Myth and reality melt magically together in this Colombian family saga.

A failed novelist steals a woman’s trashed diaries which reveal she’s plotting her own murder.

58 The Savage Detectives by Roberto Bolaño

Intellectuals withdraw from life to play a game of musical and mathematical rules.

56 The Tin Drum by Günter Grass

Paragraph-less novel in which a Czech-born historian traces his own history back to the Holocaust.

Scholar’s sexual obsession with a prepubescent “nymphet” is complicated by her mother’s passion for him.

After nuclear war has rendered most sterile, fertile women are enslaved for breeding.

52 The Catcher in the Rye by JD Salinger

Expelled from a “phony” prep school, adolescent anti-hero goes through a difficult phase.

From baseball to nuclear waste, all late-20th-century American life is here.

49 The Grapes of Wrath by John Steinbeck (R)

“Okies” set out from the Depression dustbowl seeking decent wages and dignity.

48 Go Tell It On the Mountain by James Baldwin

Explores the role of the Christian Church in Harlem’s African-American community.

47The Unbearable Lightness of Being by Milan Kundera (R)

A doctor’s infidelities distress his wife. But if life means nothing, it can’t matter.

46 The Prime of Miss Jean Brodie by Muriel Spark (R)

A meddling teacher is betrayed by a favourite pupil who becomes a nun.

45 The Voyeur by Alain Robbe-Grillet

Did the watch salesman kill the girl on the beach. If so, who heard?

A historian becomes increasingly sickened by his existence, but decides to muddle on.

43 The Rabbit books by John Updike

42 The Adventures of Huckleberry Finn by Mark Twain (R)

A boy and a runaway slave set sail on the Mississippi, away from Antebellum “sivilisation”.

41 The Hound of the Baskervilles by Arthur Conan Doyle

A drug addict chases a ghostly dog across the midnight moors.

40 The House of Mirth by Edith Wharton (R)

Lily Bart craves luxury too much to marry for love. Scandal and sleeping pills ensue.

A Nigerian yam farmer’s local leadership is shaken by accidental death and a missionary’s arrival.

A mysterious millionaire’s love for a woman with “a voice full of money” gets him in trouble.

37 The Warden by Anthony Trollope

“Of all novelists in any country, Trollope best understands the role of money,” said W?H Auden.

An ex-convict struggles to become a force for good, but it ends badly.

An uncommitted history lecturer clashes with his pompous boss, gets drunk and gets the girl.

34 The Big Sleep by Raymond Chandler

“Dead men are heavier than broken hearts” in this hardboiled crime noir.

Epistolary adventure whose heroine’s bodice is savagely unlaced by the brothel-keeping Robert Lovelace.

32 A Dance to the Music of Time by Anthony Powell

Twelve-book saga whose most celebrated character wears “the wrong kind of overcoat”.

Published 60 years after their author was gassed, these two novellas portray city and village life in Nazi-occupied France.

The jigsaw puzzle of lives in a Parisian apartment block. Plus empty rooms.

Thigh-thwacking yarn of a foundling boy sewing his wild oats before marrying the girl next door.

Human endeavours “to mock the stupendous mechanism of the Creator of the world” have tragic consequences.

Northern villagers turn their bonnets against the social changes accompanying the industrial revolution.

25 The Moonstone by Wilkie Collins (R)

Hailed by TS Eliot as “the first, the longest, and the best of modern English detective novels”.

Modernist masterpiece reworking of Homer with humour. Contains one of the longest “sentences” in English literature: 4,391 words.

Buying the lies of romance novels leads a provincial doctor’s wife to an agonising end.

A false accusation exposes the racist oppression of British rule in India.

In which Big Brother is even more sinister than the TV series it inspired.

19 The War of the Worlds by HG Wells

Bloodsucking Martian invaders are wiped out by a dose of the sniffles.

Waugh based the hapless junior reporter in this journalistic farce on former Telegraph editor Bill Deedes.

17 Tess of the D’Urbervilles by Thomas Hardy (R)

Sexual double standards are held up to the cold, Wessex light in this rural tragedy.

A seaside sociopath mucks up murder and marriage in Greene’s literary Punch and Judy show.

15 The Code of the Woosters by PG Wodehouse

A scrape-prone toff and pals are suavely manipulated by his gentleman’s personal gentleman.

Out on the winding, windy moors Cathy and Heathcliff become each other’s “souls”. Then he storms off.

A slave trader is shipwrecked but finds God, and a native to convert, on a desert island.

Every proud posh boy deserves a prejudiced girl. And a stately pile.

Picaresque tale about quinquagenarian gent on a skinny horse tilting at windmills.

An English professor in post-apartheid South Africa loses everything after seducing a student.

Poor and obscure and plain as she is, Mr Rochester wants to marry her. Illegally.

6 In Search of Lost Time by Marcel Proust

5 Heart of Darkness by Joseph Conrad

“The conquest of the earth,” said Conrad, “is not a pretty thing.”

4 The Portrait of a Lady by Henry James (R)

An American heiress in Europe “affronts her destiny” by marrying an adulterous egoist.

Tolstoy’s doomed adulteress grew from a daydream of “a bare exquisite aristocratic elbow”.

Monomaniacal Captain Ahab seeks vengeance on the white whale which ate his leg.

“One of the few English novels written for grown-up people,” said Virginia Woolf.

For the record I've read 37 of the above and I'm half-way through Germinal.
2018 update - I've now read 40 of the book on this list. It's obviously going to be a life long project!

Just as well I like a challenge!
Posted by Brona Labels Classic, Humour, Lists at 25.7.14
Email ThisBlogThis!Share to TwitterShare to FacebookShare to Pinterest