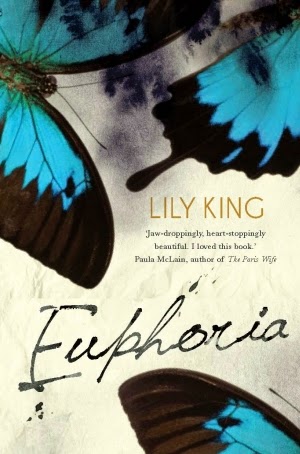 Is it history, is it fiction, is it memoir?

As it turns out, Euphoria is a little bit of each.

Euphoria is a story loosely based on the life of Margaret Mead. And when I say, life, I actually mean one small section of her life.

And when I say loosely, I mean very!

King writes about the few months that Mead shared in New Guinea on the Sepik River with her second husband Reo Fortune and soon-to-be third husband, Gregory Bateson.

Knowing this, I expected the story to run along similar lines to Mead's real life story. But, no, it does not - especially in one fairly major, important way (which you will have to discover for yourself!)

The story is also not really about Mead.
Most of the story is told from  Bateson's point of view. It is his back story that we learn about and we see Margaret, her work & her marriage to Fortune, through his eyes.

I thoroughly enjoyed the story - fact and fiction. And I read it in a few quick, compulsive sessions.
I've had a thing for Margaret Mead ever since my Yr 6 school project on her which left me with a desire to be an anthropologist. So all the details about their life in New Guinea, studying and living with the various groups & how they worked was fascinating to me.

I loved how King wove in concerns about how Westerners changed the cultures they were observing simply by being there, the nature of observation, subjective and objective & how some cultures resisted, evaded or deliberately deceived Western observers. And does the observation process actually show us more (as Bateson suggests) about the anthropologist than the tribe?

All fascinating ideas to be explored; all deftly & lightly done by King.

But as King wrote her three main characters, I struggled to find much to like or even admire in them.

I also struggled with their names.
The three main characters all had different names (Nell Stone, Schulyer Fenwick & Andrew Bankson) and the tribes they were working with in New Guinea had different names, but everyone else had their real names - Bateson's family & fellow anthrolopolgists, especially.

For me, it confused the issue about what was real and what wasn't...although maybe that was the whole point?

I'm not sure I'm as keen as I once was to know more about Mead, although her daughter with Bateson has written a memoir that does sound tempting. Maybe seeing them through the loving but, anthropologist trained eyes of their daughter, will leave me with a more sympathetic view of them.
Posted by Brona Labels Biography, Fictionalised History, Historical Fiction, Relationships at 5.2.15
Email ThisBlogThis!Share to TwitterShare to FacebookShare to Pinterest