Testament of Youth by Vera Brittain

Reading Vera Brittain's memoir about her years as a VAD nurse during WW1 was a far more intense and bittersweet experience than I first anticipated.

I have tried to write this review several times this week but I've struggled to find the right tone. 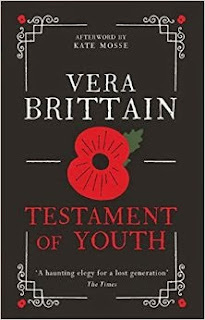 Testament of Youth is a sombre book and my attempted reviews so far have reflected this. But unlike Brittain I have been unable to claim the tags, "sad but beautifully written", or "heartbreaking yet eloquent"!

This is a story full of beauty and ugliness. It is deeply personal yet restrained. It is insightful, intellectual writing encased in emotional honesty.
It's a slow, compelling read, with a lot to absorb.

Testament of Youth was also part of my Reading England challenge.

Although Vera's adult years were spent between Oxford and London (as well as nursing overseas), her teenage years were in Buxton. And it was in Buxton that she first met Roland....

Buxton is near Manchester in the spa district of Derbyshire. Built on the River Wye with a geothermal spa nearby, it was made famous by the patronage of the Darwin's & Wedgewood's.

Vera's father worked in a local pottery mill. Her feelings about Buxton were of a love/hate kind.

"but in those years when the beautiful heather-covered hills surrounding Buxton represented for me the walls of a prison." pg 38


"Buxton, which my father used to describe as 'a little box of social strife lying in the bottom of a basin,' must have had a population of about twelve thousand apart from the visitors who came to take the waters." pg 38


It was in Buxton that Vera and her family sat out the wait to see if the world was going to war or not.

"Later, on my way home, I found the Pavilion Gardens deserted, and a depressed and very much diminished band playing lugubriously to rows of empty chairs." pg 75


"It was the last Christmas we spent together as a family, and the unspoken but haunting consciousness in all our minds that perhaps it might be, somewhat subdued the pride with which we displayed him to our acquaintances in the Pavilion Gardens." pg 89
Buxton & surrounds also witnessed the early scenes of Vera & Roland's romance.

"After tea we walked steeply uphill along the wide road which leads over lonely, undulating moors through Whaley Bridge....This was 'the long white road' of Roland's poems, where nearly a year before we had walked between 'the grey hills and the heather', and the plover had cried in the awakening warmth of the spring. There was no plover there that afternoon; heavy snow had fallen, and a rough blizzard drove sleet and rain into our faces." pg 104


From Buxton, Vera watched the young men marching off to war, feeling more & more frustrated at her own lack of activity and purpose.

"...the mobilisation order on the door of the Town Hall; I joined the excited little group round the Post Office to watch a number of local worthies who had suddenly donned their Territorial uniforms..." pg 75

"In the early morning we walked to the station beneath a dazzling sun, but the platform from which his train went out was dark and very cold....I watched the train wind out of the station and swing round the curve until there was nothing left but the snowy distance, and the sun shining harshly on the bright, empty rails." pg 106

Brittain describes the constraints and provincialism of small town life to a tee. While she could appreciate the natural beauty of the area, it was never going to be enough to hold someone who was so fiercely determined to live an intellectual, independent, active life.

There is so much more to say about this book as it discusses feminism, academia, the League of Nations & politics. Brittain comments on the values of peace, duty, despair, resilience, remembrance & honour. I could go on & on & on....but the best thing for all of us is for you to simply read this exatrordinary story yourself!

I highly recommend Testament of Youth for lovers of great memoirs. This is one you wont forget in a hurry.
Posted by Brona Labels *****, 1001 Books, Biography, Classic, Movie, Reading England, War Story, Women's Issues at 13.3.15
Email ThisBlogThis!Share to TwitterShare to FacebookShare to Pinterest