A Motor-Flight Through France by Edith Wharton

I was so excited when my beautiful copy of A Motor-Flight Through France turned up in time for Wharton Review month.

The look and feel of the cover, the premise (a road trip through France pre-WWI), the paper, even the size of the book - perfect!

First published in 1908, this edition came with a thoughtful and enticing introduction from Mary Suzanne Schriber. Mary, along with her friend Lynne Waldeland, embarked on a five week roadtrip in 1980 with Wharton's Motor-Flight as a guide.

What a delightful thing to do!


Wharton's flight to France, however, was much more than a move away from America and its lack of interest in intellectual matters and intellectual women. It was a positive flight as well, toward stimulation and expansion.

A Motor-Flight Through France is stimulating and intellectual and full of the joys of the open road.

It's obvious that Wharton loves France and the French way of life:


...everything speaks of long familiar intercourse between the earth and its inhabitants; every field has a name, a history, a distinct place of its own in the village polity; every blade of grass is there by an old feudal right....

Coming from another country with a small recorded history, I understand this desire to fall into the long history of Europe.

Like Wharton, I also like to read extensively (before, during and after) about the places that I visit. I like reading their histories. And I love reading the well-known stories as well as the contemporary authors.

Wharton & I should be besties! The perfect travelling companions.

But something went wrong.

Despite the occasional phrase, beautifully wrought, the fascinating black and white photographs and the all too rare gorgeous description, I began to realise that my high expectations were souring. Not because of what she was writing, but how she was writing it.

I became aware of a smugness, an intellectual superiority and at times, a snobbery towards people not like her. 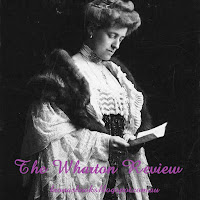 I recall that I also had a similar response to A Backward Glance, her autobiography that I reviewed last year.

And now I'm left wondering if this will affect my future rereads of her novels? Can you love and adore a book when you're no longer sure you like or admire the person who wrote it?

As an aside, I believe that A Motor-Flight Through France is dying for a modern make-over. Schriber missed a great opportunity to layer her 1980 road trip over Wharton's. Perhaps Michael Palin (or me!!) could undertake to follow in Wharton's tyre treads. We could compare her views to the modern day view. What buildings and scenes were destroyed during the wars? What has been built up, built over or lost?