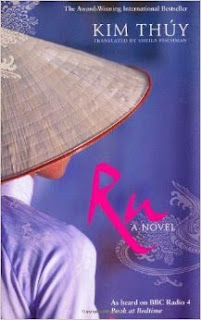 I love it when I discover a new author that simply bowls me over with the beautiful simplicity of her story. Reading Thuy's (pronounced twee) autobiographical novel, Ru has been a magical, moving experience.

"I came into the world during the Tet Offensive, in the early days of the Year of the Monkey, when the long chain of firecrackers draped in front of houses exploded polyphonically along with the sound of machine guns."

Like Thuy, and her protagonist, An Tinh, I was born in the Year of the Monkey, 1968, but our two stories could not be further apart. Yet last night we shared a chat and a laugh and compared comfort foods (Thuy - congee; me - vegemite on toast).

Thuy spent the first ten years of her life in Saigon; most of that time was taken up with post war reconstruction and re-education programs. Her family then fled Vietnam via boat and eventually ended up in a Malaysian refugee camp. Some time later they emigrated to Quebec, Canada.

There is nothing ordinary or usual about this story and there is nothing usual or ordinary about Thuy's writing - it's a mixture of the poetic, the graphic and the sublime.
Thuy reminds us all to see and feel the love in all the different and subtle ways that people show it to us.

I had the pleasure of meeting Thuy twice during the week at the Writer's Festival in Sydney. She confirmed that her books are such a mix of fact and fiction that it's almost impossible to separate the two out.

Her books begin as "fat documents that get simmered down" into word precise vignettes. I loved the image she painted of walking "around the words to see them from every angle" before selecting them or deleting them from each draft. For me, the only flaw with this style of writing is that the vignettes only just hung together and they didn't quite come to a satisfactory end. But Ru was all about the journey, not the destination. It's the writing, the emotions and the memories that stay with you for days afterwards.

I can't wait to get into Thuy's latest novel, Man, also written in French and translated by Sheila Fischman.

Ru has been won several awards since its 2009 publication -

If you loved Like Water For Chocolate and Perfume, I think you will also love Ru.
Posted by Brona Labels A Year in Books, Biography, Canada, French, Sydney Writers Festival, Translation, Vietnam at 22.5.15
Email ThisBlogThis!Share to TwitterShare to FacebookShare to Pinterest