Gone With the Wind by Margaret Mitchell (chapter check-in)

Corinne is unable to host the Gone With the Wind discussion for chapters 21-30, so I have put up my hand to help out.

I've been loving my reread of GWTW & enjoying the group discussions immensely, so I was keen to ensure the group had somewhere to touch base until Corinne could regroup on her own blog.

There will be spoiler references in this post, so if you haven't read up to chapter 30, stop right here until you catch up!

At the start of Chapters 21-30 we see the war proper arrive in Atlanta. Soldiers marching by, the sound of cannon and untold numbers of injured overflowing from the hospitals. Half of Atlanta flees ahead of the advancing Yankee troops, but Scarlett and Melanie stay as they wait for the birth of Melanie's baby.

Thanks to the timely reappearance of Rhett, Scarlett and Melanie are helped out of Atlanta as it burns. It is right here that we witness the famous first kiss between Rhett and Scarlett...just before he runs off to join the retreating Confederate army.

Scarlett, Melanie, Prissy and kids undergo a harrowing trip to Tara only to learn the even more distressing news on their arrival that Mrs O'Hara has just died of typhoid fever the day before. Mr O'Hara has lost his mind with grief and the other girls are still recovering from their illnesses. All but three of the slaves have run off, the cotton has been burned by the Yankees and there is very little food for anyone.

Scarlett pulls herself together to save her family from starvation and illness. Everyone now has jobs to do to help out. Scarlett kills a Yankee soldier and Melanie helps her cover up the deed. 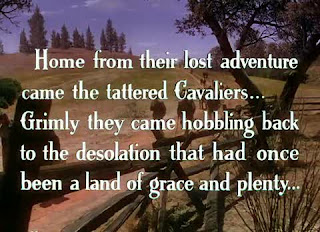 The war ends and the Confederate troops slowly walk home. The folk of Tara help feed and shelter many of them in the hope that some other families are caring for Ashley as he walks home to them. One of the returning soldiers is Will Benteen who stops at Tara to help out in thanks for the care given. Scarlett finds herself relying on his gentle strength and sensible advice.

Chapter 30 is also the end of Part Three. Tara is struggling to get back on its feet, Scarlett is a changed woman and Melanie is slowly recovering from her difficult child bearing experience. The last triumphant, stirring paragraph brings Ashley back into the loving arms of his patient wife.

For me the challenge in rereading GWTW is separating out my memories of the movie from the book. It's not always easy as the movie was very faithful to the original. And some of the movie images are so powerful that they will stay with me for the rest of my life, no matter how many times I reread the book.

Atlanta burning is one of those images.
Rereading Scarlett's mad dash with Rhett, Melanie, Prissy and kids through the burning warehouses was actually made more dramatic thanks to the movie.


Ahead of them was a tunnel of fire where buildings were blazing on either side of the short, narrow street that led down to the railroad tracks. They plunged into it. A glare brighter than a dozen suns dazzled their eyes, scorching heat seared their skins and the roaring, cackling and crashing beat upon their ears in painful waves. 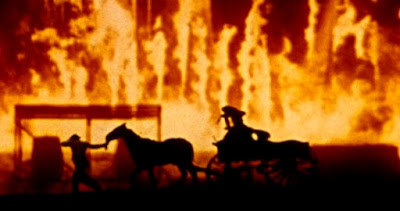 It was impossible to read those words without the movie images accompanying every sentence.

But one of the big differences between the movie and the book is Will Benteen. As I was reading this section, I actually stopped to exclaim, "who the hell is Will Benteen?" I had forgotten all about him from my first read through of GWTW back in my twenties. And like young Wade, Scarlett's baby to Charles Hamilton, he's cut from the movie completely! It is in fact, Will (& not Mammy) who holds Scarlett back when Melanie rushes down the avenue into Ashley's arms at the end of chapter 30.


Eventually all the family found their way into Will's room to air their troubles - even Mammy, who had at first been distant with him because he was not quality and had owned only two slaves....gradually, unobtrusively, a large part of the burden of Tara shifted from Scarlett's shoulders to the bony shoulders of Will Benteen.

I'm now very, very curious to see what happens with the Benteen storyline in future chapters. Why did Mitchell include him in the story? And why was he ditched in the movie? 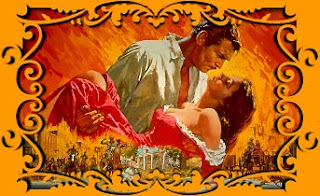 During this section, Scarlett undergoes a huge period of personal upheaval and growth. She starts off needing her mother's love and strength to get her through, but Ellen's death rocks Scarlett to her very core. She is on her own, and she feels there is no-one for her to lean on or to ask for help. She pushes her grief to one side and gets stuck into the hard work of repairing Tara and finding food to feed everyone. She comes to challenge Ellen's views:


Nothing her mother had taught her was of any value whatsoever now and Scarlett's heart was sore and puzzled....'Nothing, no, nothing, she taught me is of any help to me! What good will kindness do me now? What value is gentleness?

And even when Grandma Fontaine pulls her aside to tell her thats it's,

Scarlett ignores the advice and fails to see how Grandma Fontaine's story might help her. So even though Scarlett has learnt a lot about being strong and independent, she still fails to see any perspective but her own. She belittles Carreen's heartbreak, finds Frank's love for Suellen incomprehensible and feels annoyed at Melly because of her ability to "grasp more of situations than she herself did."

At the same time, several events allow Scarlett to somewhat grudgingly see how strong Melly really is underneath her quiet, gentle nature.

What do you think of Scarlett's choices during this section? 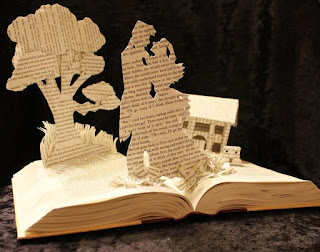 As an aside, did you know that Mitchell got the name for her book from a line in one of her favourite poems? And did you spot Mitchell's use of 'gone with the wind' in this section of the book as well?


Just in case Corinne is unable to host the next chapter check-in, TJ from My Book Strings has indicated that she can lead us through chapters 31-40. Until then, please feel free to leave your GWTW related posts in the linky below.