Brother of the More Famous Jack by Barbara Trapido 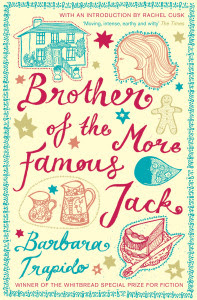 How on earth did this book escape my teenage radar?

I so wish I had read Brother of the More Famous Jack in 1982 when it first came out. I could have come of age with Katherine and had this as one of my go-to comfort reads for the past thirty years.

Littered with Jane Austen references (because, of course, our Katherine is an Austen fan), Italian lovers and a few feminist rants - what's not to love!

I'm not going to say any more about this wonderful, heart-warming story in case you haven't read it yet (or even heard of it, like me until a few weeks ago)!
I want you all to experience the sheer delight of discovering it for yourself.

I feel sure if I had discovered Brother of the More Famous Jack in my teens, I would have spent my adult life quoting from it.

Roger wears his principles, a little provocatively, high on his shoulder like a schoolboy's dufflebag....

I was too much in love with him and too young to perceive him as absurd and petulant Hamlet....

I slipped politely and obligingly out of his life without a word of recrimination....

I know all about these clever chaps like yours and mine you see. I know all about their nice impressive commitments to the rights of women and the division of labour, because they're very good at articulating these things and it costs them nothing to say it all as nicely as they do....


The fact that this slim book has taken me over three weeks to read, says more about my crazy life at the moment than the quality of this little literary gem.

Our imminent move has proven somewhat useful to my reading habits though. It has helped me to reassess just how many books I need to take forward with me in this life. The criteria for keeping a book or passing it on has boiled down to one basic idea - will I reread this book at some point in my life or not?

So far it has been surprisingly easy to decide.

I own books that I have loved and adored but I know that I will never feel the need to reread it (All the Light We Cannot See).
I have books that I felt a little so/so about, but sensed there was something more to the book than my first read revealed that I want to explore further (The Childhood of Jesus).
And there are some books that I just know will be read, reread and reread again.

Brother of the More Famous Jack is one of those.

PS. After some recent web-trawling I found this great snippet on Bloom about Trapido's books that now has me gasping for more:

Barbara Trapido’s books are not exactly a traditional series. Still, four of her seven novels share a common set of characters and, if read in order, offer some of the pleasure of a series—chiefly, the chance to return to a well-loved fictional universe and revisit its characters over time.

The irony for me is that when I first discovered Trapido, I had no idea that any of her books were connected. I started, in fact, with the last of the four, her 1998 novel The Travelling Hornplayer, which I enjoyed with no foreknowledge whatsoever. But it was only when I learned its connection to her three earlier novels—Brother of the More Famous Jack (1982), Temples of Delight (1990), and Juggling (1994)—and read the books in sequence that I could appreciate the full scope of Trapido’s creation, her unique genius. So, it should be no surprise that my first bit of advice is to read her books in order, or, at least the four linked books. Her three unlinked novels—Noah’s Ark (1984), Frankie and Stankie (2003), and Sex and Stravinsky (2010)—are all also wonderful and can be read in whatever order you’d like.

Posted by Brona Labels Coming of Age, Contemporary Fiction, Jane Austen at 12.7.15
Email ThisBlogThis!Share to TwitterShare to FacebookShare to Pinterest