Phew! We made it.

After two months of all things Scarlett and Southern sentiment it is time to draw the curtains and dim the lights on the O'Hara's and the Confederacy. 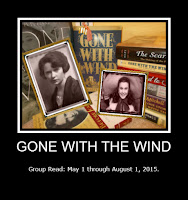 Rereading Gone With the Wind after twenty+ years was an unexpected treat. I was worried that it may have dated or that I may have moved on in my literary tastes. I was delighted to discover that it was as fresh, rich and as engaging as the first read.

Our reading of GWTW is now influenced by the thoughts and beliefs of our period of time.
In the future, different understandings and sensibilities will have evolved again and our reviews will simply be a part of the timeline of this remarkable book.

I believe that this is what makes GWTW a classic.

Despite the constantly changing landscape that is its historical, social and cultural contexts, the underlying themes of friendship, strength, courage, belonging and morality have been and will be endlessly fascinating to readers across all times.

Corinne, early on in the Gone With The Wind readalong, mentioned that Margaret Mitchell was very interested in psychology and that the development of Scarlett's character reflected this interest.

From the start I was struck by Scarlett's distinctive behaviour and language which had lots in common with Borderline Personality Disorder. But as the story went on I realised that Scarlett didn't exhibit the usual BPD characteristics of unstable self, hostility and irresponsibility.

A few of the typical HPD characteristics are:


Antisocial, Narcissistic, Borderline, and Histrionic Personality Disorders are all closely related since they all share the same core feature of antagonism.

This core feature is an exaggerated sense of self-importance, insensitivity towards the feelings and needs of others, and callous exploitation of others. These antagonistic behaviors put the individual at odds with other people. If an individual has one of these antagonistic personality disorders, they are very likely to have another. (mentalhealth.com)


Initially I had planned to add quotes or descriptions that highlighted Scarlett's HPD traits. But there were so many that in the end it felt completely unnecessary to rehash the whole book to prove each point!


However my curiosity and interest in this side of Scarlett's personality gave me insights into why we love to hate her and hate to love her. 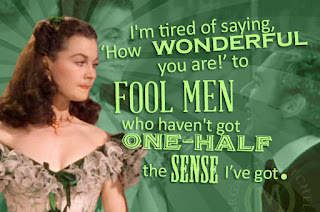 Yes, she is strong, independent and very capable. She can also be sassy, smart and sexy. We can admire and even respect these traits. However her motivations, words and subsequent actions so often negated the good she actually did.

Having experienced up close and personal the roller coaster ride of someone with BPD, I understand Rhett's "I don't give a damn" comment.
It is exhausting being around someone like this, especially an untreated, in denial someone like this.

The constant drama's lose their appeal very quickly and the emotional manipulations take their toll until you just can't do it any longer and you simply don't believe or trust they can ever change (despite all their promises to the contrary).

Which is why I firmly believe that Rhett and Scarlett will never get back together. Scarlett's future manipulations to get Rhett back will only reinforce to Rhett why he should keep his distance. Peace, charm and grace are not in Scarlett's repertoire.

In my opinion, the main feeling Rhett experiences as he walks out the door is one of pure relief (tinged with sadness and regret no doubt, but relief nonetheless).

Rhett is no angel, but he is fully cognizant of his own behaviours and motivations. He accepts responsibility for his actions and character flaws. At the end he simply realises that Scarlett's charm is best viewed from afar. The reality of living with it is no longer so delightful to him. 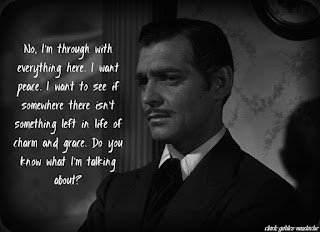 Mitchell's ending may not make every reader happy, but it reflects the usual (untreated) HPD/BPD relationship trajectory.

I found myself surprised by how much I thoroughly enjoyed this reading of GWTW though. Comments and reviews that have come my way over the years, had led me to believe that it wouldn't live up to my fond memories. And the BPD connection made for some uncomfortable reading at times.

If you haven't read GWTW yet, please reconsider. It's an epic read with fascinating characters, set during a remarkable period of American history. It's a Pulitzer Prize winning, American classic for very good reasons.

Interesting facts from Margaret Mitchell's real life that turned up in GWTW:
Curious facts about GWTW:
My check-in post for chapters 21-30 is here.
Chapters 31-40 is here.
And chapters 51-60 is here.