The 941st page of The Fortunes of Richard Mahony by Henry Handel Richardson is read, lamented and sighed over.

Not quite in the #AusReadingMonth time frame I originally set out, but a run of bad headaches and vertigo got in the way at the end.

Unlike poor Richard Mahony though, my brain has returned to normal working order.

What an epic tragedy is the life and times of Mahony and Polly.

In true Dickensian style we see the rise and fall, rise and fall of Mahony's fortunes. Randomness and displacement the common themes each time. Right to the bitter end, dear Polly is still frustrated by the "dear warm incompetent human creature at whose side she had been through so much."


Even though his troubles were mostly of his own making. For he had always asked for more of life than it could give: and if, for once, he got what he wanted, he had not known how to sit fast and hold it: so the end was the poor old wreck on the bed before her.

Although all three stories follow the life and times of Richard Mahony, the books are really about Polly, or Mary as we must call her for most of the story. From her shy, insecure beginnings as a young wife, Mary blossoms and grows strong. She stands before all obstacles, she rises to each challenge and faces down all adversity. She is endlessly patient, determined and practical. Mary is open, friendly and warm-hearted to Mahony's secretive, insular ways. She is rational in the face of Mahony's wild dreams and fantasies.

Richardson also shows us how she is shackled by the conventions of the time - about what is right and proper for women to do or not do. Mary accepts these conventions as well but works within these boundaries as best she can.

Richardson's own father died when she was but nine years of age (just like Cuffy) whilst her mother was running the local post office at Koroit, Victoria.

One suspects that many of the feelings and agonies subscribed to Cuffy were Richardson's reliving of this painful, difficult period of their lives. Ultima Thule has all the agonies and peculiarities of a memoir. Like Richardson, Cuffy is given musical talents. He is a difficult child, deeply private and circumspect at a young age. Curious, bright and deeply traumatised by his father's illness and decline. I would love to now read a biography about Richardson to draw the parallels that are obviously on display here.


Interesting, the Koroit Post Office that was built in 1872, which housed Richardson and her family for two years, still exists. Richardson father was buried in nearby Tower Hill Cemetery. A brass plaque on the wall states that Richardson lived here.

Another place that still exists from Richardson's childhood is Lake View House at Chilton. In Ultima Thule, Chilton is called Barambogie. Sadly, their time here was the beginning of the end for their father's health and their fortunes, as it was too for Richard Mahony.

Lake View was preserved by local enthusiasts until the National Trust stepped in to take over running the site in 1970 - 100 years after Richardson's birth. 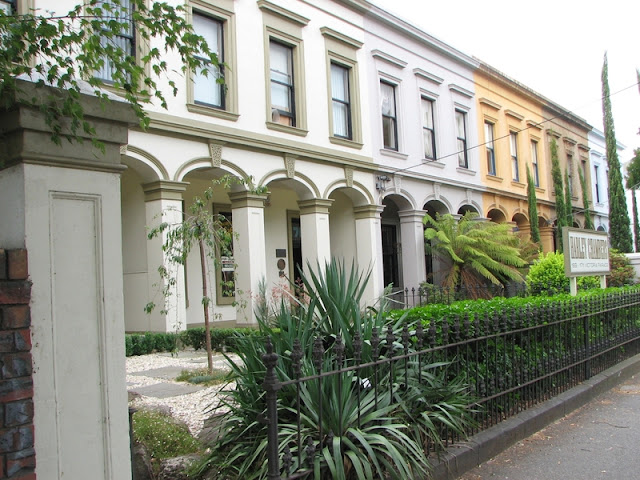 The Fortunes of Richard Mahony is an heroic saga that takes us on a character-driven psychological journey through mid 1800's Victoria as well as through the trials and tribulations of one family. It is an emotional, epic and fascinating read, populated by a full cast of well-drawn personalities. It questions the spiritual, intellectual and societal mores of the times. It highlights women's issues, the effects of poverty and mental health problems, the search for home and belonging and the meaning of life.

I'm so glad that I have taken this time to read this classic Australian novel.
The story of Mahony and Mary will stay with me for a very long time (which is just as well, because I don't know if I will ever have the courage to reread it!)
But read it once, you must.

My Australia Felix post is here.
The Way Home is here.

Also reviewed by Me, You and Books.
This post is part of my Australian Women Writers challenge.
Posted by Brona Labels AusReading Month, Aust Women Writers, Australian, Classic, Readalong, State by State, VIC at 6.12.15
Email ThisBlogThis!Share to TwitterShare to FacebookShare to Pinterest