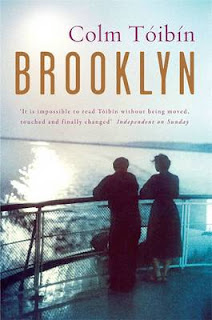 Usually, I prefer to read the book before I see the movie, but in this case our hot summer weather beat me to the punch.

Last weekend was hot, humid and very unpleasant. My family of boys were absorbed by all things pre-season soccer, so I escaped the heat and the testosterone and sought out the cool, dark comfort of our local cinema.

I watched Brooklyn and Carol back to back. It was heaven on a stick!

Both movies were heart-achingly fabulous for very different reasons and I came away determined to read both books as soon as possible.

I have decided to use this experience to test the pros and cons of seeing the movie before reading the book.

There is no doubt that books offers up much more detail and that most movies have to cut, condense or merge scenes, dialogue and even characters.

Brooklyn is no different.

As I was reading the book, I quickly discovered that Eilis and Rose were not the only siblings - they had three brothers who had moved to England to get to work.
Later, at work in Brooklyn, Eilis talks about the nylon sales and the subtle prejudices at play when black women are encouraged to shop in the store. No such scenes existed in the movie.
There was also an uncomfortable vague lesbian scene with Eilis and Miss Fortini during the bathing suit scene that didn't make it into the movie.

However, the movie provided an emotional depth that I found missing in my reading of the book. I found Toibin's writing to be so subtle and nuanced, that I didn't really enter into Eilis' emotional state in the same way I did as when I was watching the movie.

Perhaps the movie images stole my ability to emotional connect with the written words? I already had Eilis' face, especially her expressive eyes, in my head. Those images were very powerful and Toibin's words alone were not enough to capture all the emotional states I experienced in the cinema.

The movie also taught me how to enunciate Eilis' name correctly. Her lovely Irish name is pronounced Ay-lish. 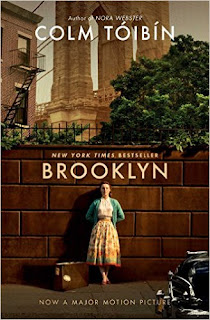 I've included the movie-tie-in cover because this particular scene in the movie was wonderfully moving & added to the romantic nature of the movie interpretation. It was not one based on the book.

The book ending was more about Eilis and her personal freedom. It was a declaration of independence - rooted in her past but heading forward into her future. It was hopeful and empowering  and practical rather than romantic.

During Eilis' first Christmas in Brooklyn, she helps Father Flood feed the homeless. At the end of the meal one of the men sings a traditional Irish song. It's a poignant scene in both movie and book. The movie scene depicts all the characters feeling homesick and nostalgic.

Whereas the book scene is more about Eilis - each time the singer reaches the chorus he looks at her "managing to suggest even more that he had not merely learned the song but that he meant it."

The chorus ma bhionn tu liom, a stoirin mo chroi can be translated as "if you'll be mine, be mine, oh treasure of my heart". It's easy to imagine that these hard-living, lonely men saw in Eilis the embodiment of all they loved and remembered as being good about Ireland.

Towards the end of Brooklyn, when Mrs Lacey is telling Eilis about all the people who have visited in the wake of the funeral, she mentions Nora.
I love how authors connect their books and their characters.
After reading Nora Webster I had heard that the story was based loosely on Toibin's own childhood, which now makes me wonder if Eilis' story is also loosely based on someone he knew. Especially since Mrs Lacey reappears in the early chapters of Nora Webster chatting about life in Brooklyn and Eilis and Tony.

At the end of Nora, I declared my desire to read more Toibin. I'm glad I listened!

My review of Nora Webster.