Every Man For Himself by Beryl Bainbridge 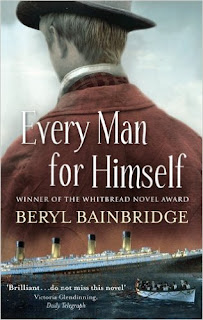 Every Man For Himself was one of those books that ticked many boxes for me.

It was my very first Bainbridge and I've been curious about her for quite some time now.

It also won the Whitbread (now the Costa Award) for 1996 and was shortlisted for the Booker (which I note was actually won by Graham Swift for Last Orders).

Furthermore it's a Titanic book, for which I have a bit of thing.

Every Man For Himself also allowed me to tick off another book for my #20booksofsummer (winter) challenge and join in Annabel's Beryl Bainbridge reading week.

I prefer Titanic stories that avoid romanticism and nostalgia. I prefer the curious but true, the psychology, or the everyday approach to this tragic human drama.

Every Man For Himself returned all of this in spades. Peopled by fictional characters who mixed with actual first class passengers and crew, Bainbridge explored the nature of class and courage and integrity, all mixed up with foolishness and snobbery and the mundane.

Mystery abounds, there are puzzling characters, snatches of overheard conversations, loads of drinking and buffoonery. Our narrator, Morgan spends a lot of time philosophising and pondering his future (even though the story is actually told from this future Morgan's perspective). He is insecure about his past, yet the hand of fate seems to play a big role in every thing that happens to him.

I wasn't sure how much I enjoyed this at first and puzzled over what star rating to give it on Goodreads.

Bainbridge provided sooooooo much foreshadowing that I nearly yelled out to her "enough already! I get it!" There was also a coolness in her writing style that kept me from engaging wholeheartedly.

However now that a couple of days have gone by, her attention to detail and startling descriptions keep popping into my mind. I also read somewhere that she suggested that her books should be read three times each. An artists conceit perhaps, but for an inveterate re-reader like myself, this was manna to my eyes.

I am now very curious to see what a re-read might reveal.

The other Titanic books that I've read and enjoyed are:

You can also read the reports from the two enquiries at Titanic Inquiry Project.

Do you have any other Titanic suggestions for me?

P.S. I did not like the modern movie (too romantic and nostalgic), although I did find the information about how the ship split in two towards the end fascinating.