On the Beach by Nevil Shute 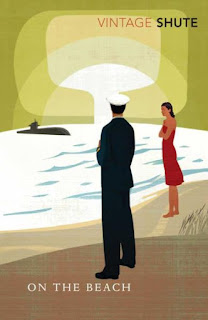 What a powerful reading experience!

On the Beach is an Australian classic set in Melbourne in the 1950's about the end of the world.

The Northern Hemisphere is gone.

A nuclear war between China, Russia and the USA has obliterated everything north of the equator. Australasia, South America and South Africa are now simply waiting for the cloud of fallout to drift south with the changing of the seasons.

The thing that really struck me about this post-apocalyptic book right from the start, was how polite and civilised everyone was about their imminent death. There was no panic, no fleeing, no looting, no disintegration of manners or ethics.

Everyone just got on with things. They went to work, raised their families, planted the garden with veggies for a season that they wouldn't be alive to enjoy.

Heavy drinking and reckless behaviours did start to creep in towards the end, but it was such civilised recklessness - downing copious amounts of 50 year old port and racing Ferrari's.

Spending time with your loved ones, pottering around the house and keeping busy with the usual things seems to mean the most to folks when you haven't much time left. Kindness and generosity and caring remained important for everyone right to the very end - which was such a pleasant relief after watching the end of the world as imagined by the makers of The Walking Dead where everyone becomes so vicious and cruel.

I was also profoundly moved by their careful preparations for their pets right at the end when they realised that the radiation affected animals at a slower rate than humans.

Shute used fictional places as well as real towns and cities. Falmouth, where the story opens, is based on Frankston, the town that Shute lived in on the Mornington Peninsula and the race track Tooradin is most likely, the race track on Philip Island.

Nancy @ipsofactodotme read On the Beach for AusReadingMonth a couple of years ago - her review is here.
And TJ @My Bookstrings reviewed it last year here.

P.S. The weather for our second weekend of #20booksofsummer was much better than the destructive #eastcoastlow and storms of last weekend.

Glorious winter sunshine with the temp. creeping up to about 20°C at lunch time. Lovely, although I've ended up with my first head cold for the year :-(

3/20
Posted by Brona Labels 20 Books of Winter, Apocalyptic, Australia in Print, Australian, Classic, VIC at 13.6.16
Email ThisBlogThis!Share to TwitterShare to FacebookShare to Pinterest