The Catherine Wheel by Elizabeth Harrower 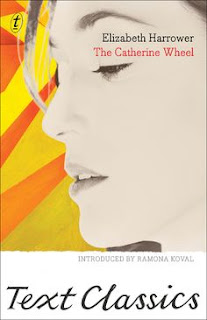 The Catherine Wheel was my latest #CCSpin read.

I found it quite a tough read at times.

Harrower's only novel to be set in post war England focuses on young Clemency Jones. Brilliant writing evokes a tangible sense of the cold, deprivation and chaos that existed in London at this time.

But it is Clem's chance meeting with the charismatic window cleaner, Christian Roland that proves to be the central focus.

The reader is quickly alerted to Christian's more disturbing, dangerous nature. Tell-tale comments and behaviours build up a picture of a young man careless with the truth, irresponsible with money, relationships and work and somehow able to suck people into taking care of him.

Clem is smart enough to see this too, but for some reason I could never quite fathom from the story, she too allows herself to be sucked into his chaotic world.

This came as his opinions always did with an air of tremendous authority. Considering how bizarre, prejudiced and just plain wrong they often were, I thought his confidence all the more charming.

He had a way of distributing virtues, vices and histories where and how he would. He rarely asked: he told.


I nearly gave up on the story a couple of times as I found the descriptions of Christian's rages and manipulations too chilling and too close to home at times (we know someone with Borderline Personality Disorder who is a female version of Christian).

I would love to know who and what Harrower experienced in her life to give her such intimate insights into living with people who have a personality disorder.
The Watch Tower was a powerful exploration of a control freak and A Few Days in the Country also had a number of stories detailing psychological abuse and emotional manipulation.

The effect this has on the reader (or this reader at least) is one of suffocation and frustration. Like Clem, I felt a growing sense of helplessness. But unlike Clem, I just wanted to get out of there as fast as I could.

As a result, I read the last part of the book very quickly, to be done with it as soon as possible and to get Christian out of my life for good!

Extraordinary writing and characterisation indeed, to evoke such strong emotions and reactions!