The Home and the World Read Along

I wasn't sure I was going to make it in time to join in this wonderful The Home and the World by Rabindranath Tagore readalong being hosted by Cirtnecce @ Mockingbirds, Looking Glasses and Prejudices during August.

I've been reading a couple of books this past week or so and I was determined to finish them before starting any more books. I was also keen to finish my 20 books of Summer (winter) challenge.

I finished the books last night. And today, I realised that my 20 books of summer challenge should work FOR me not against me. I'll just change one of the unread books on my list for this one and everyone will be happy!


In the year of 1916, exactly 100 years ago, 3 years since he became the first Non-European to win the Nobel Prize for Literature, Rabindranath Tagore, one of the most prolific artistic geniuses to come from India, published his extremely controversial and then much contested The Home and The World. It was a book that broke the mould and brought out women from the “anter mahal” (the inner chambers where women led secluded lives in 18th-19th century Bengal, albeit with consequences) and put a spin on on the Indian National Movement by defining and defying at the same time what a true patriot is/was.

She has also taken the time to present a three part potted history of India here to help us understand the world and time in which this book takes place. 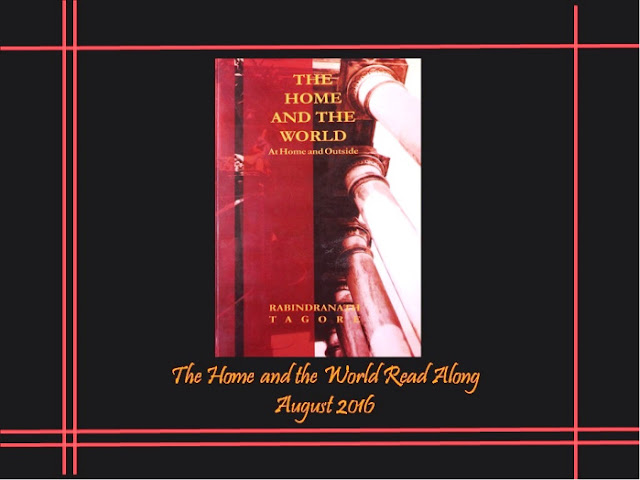 My edition is a 2005 Penguin Classics.

The translation is Surendranath Tagore's 1919 version.

Surendranath was Rabindranath's nephew and they worked together to produce this translation.


When Bimala's husband, Nikhil - a wealthy yet enlightened and charitable Bengali landowner - encourages her to emerge from the traditional female seclusion of purdah, he introduces her to his old friend, Sandip. Rutheless and charismatic, Sandip is a radical leader in the nationalist Swadeshi movement, and Bimbala is soon caught up by his revolutionary fervour and expereiences a profound political awakening.

Torn between her duties as a wife and a passion for her cause, her attempts to resolve the conflict between home and world lead to violence and, ultimately, tragedy. Vividly depicting  the clash between old and new, realism and idealism, The Home and the World (1916) is a haunting allegory of India's political turmoil in the early twentieth century.

This edition includes an introduction by Anita Desai, while William Radice's new preface examines its critical reception, Tagore's modernism and the relationship between Surendranath Tagore's translation and the Bengali text.

It's never too late to jump on board a readalong! Especially when the book is only 200 pages long.
Posted by Brona Labels Classic, India, Nobel Prize, Read the Nobels, Readalong, Translation, Women's Issues at 15.8.16
Email ThisBlogThis!Share to TwitterShare to FacebookShare to Pinterest