The Hate Race: A Memoir by Maxine Beneba Clarke 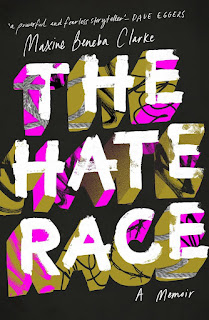 I've been trying to write my review for The Hate Race over the past few days. The problem has been not what to say, but what not!

The other thing I have found difficult has been taking myself out of this review to make it all about the book and what Clarke has to say rather than being all about me.

After much dithering, I realised that my strong reaction to this book is a big part of its importance.

The Hate Race is a searing portrayal of growing up black in the suburbs of white Australia in the 1980's.

So many of her childhood stories crashed up against things I had seen and heard and experienced during my own white suburban childhood. My schooling years were ten years before Clarke's. I often felt despair as I read her book, to see that nothing had changed in the Australian schoolyard a decade after mine, let alone what may still be happening forty years later.

I remember the primary school positive affirmation lesson of 'what I like about...' that so many well-meaning teachers inflicted on their classes during those years.

It was an agony of pleasure and pain when it was your turn to be featured, waiting for the slips of paper to come in, wondering who had said what. Trying to take pride in all the "I like Bronwyn because she's quiet' comments but eventually realising that I was surrounded by a class of others who didn't know anything about me at all.

My dad was a bankie - we moved every few years or so. Being super shy and quiet made it hard for me to make friends. It took so long to work out the new rules at each school. I was always worried that I was wrong. Belonging and fitting in and staying out of sight became my survival thing.

Sitting on the sidelines allowed me to watch what the other more popular kids got up to. I saw that belonging to those groups could be just as hard as being on your own or not fitting in. The constant checking and searching for approval and just how quickly it could turn against you. Belonging was hard work for most of them. Their apparent confidence was often only skin deep. To maintain their popular position meant keeping those different others firmly in their place - way down the school yard pecking order.

I was on the low priority teasing list at school. My difference was my newness and my shyness and most of the time I was not worthy of notice. There were others, who were more different, who were much easier targets.

The kids who had disabilities, those who came from poor families or those kids who were non-Anglo were the prime targets in all the playgrounds I've ever been in.

And they had it really tough.

The subtle and not so subtle taunts, the 'funny' comments (come on, can't you take a joke? Don't be so sensitive), the deliberate ostracism and the really cruel joke where they pretended to be your friend for a while so they could find out more stuff about you that they then told everyone at school about to use against you.


My mother used to tell us the same thing and my internal reaction was exactly the same as Clarke's.

Obviously the 'teasing' I was subjected to was much less than what Maxine and her siblings suffered. But I know how awful that little bit of hurt was and how long the effects have lingered for me and my siblings.

Trying to imagine what it would be like to times my experience by 100, by a 1000, just breaks my heart.

I would love for The Hate Race to be put on the school curriculum. But I suspect the people who really need to read this book, those folk who could really benefit from the chance to walk in someone else's shoes for a while, never will.

It turned out to be an impossible ask for me to stay out of this review.

But, I think, that's where the real power of Maxine's memoir lies.

We're ALL in this story one way or another.
This is our story too.


This is how it happened, or else what's a story for.


We are the bullies and the bullied and we are those who stand on the sidelines staying silent.


This book is dedicated to the children of Australia, including mine. May all your classrooms and playgrounds be kept safe.