I Know My Love by Catherine Gaskin 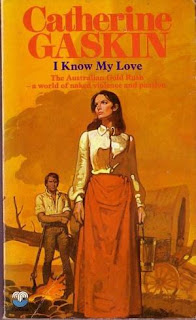 In 1982, Channel Ten produced a TV series based on Catherine Gaskin's novel, Sara Dane. I was 14 yrs of age at the time and the heady mix of historical fiction and romance ticked all my boxes. I became so enamoured of this genre and author, I went on to read my mother's entire bookshelf of Gaskin's many times over.


However my firm favourite, was I Know My Love.

I read it so many times during my teen years that I was almost word perfect!

It's a simple tale of two women - one quiet woman who had suffered adversity but carried on - stoic, determined, gritty. Emma was the Elinor Dashwood of the Ballarat goldfields.
The other woman was also strong and determined - but about getting what she wanted at all costs in as showy and glamorous way as possible. Rose was the Scarlett O'Hara of the outback, unlike Scarlett, though, when the going got tough, Rose never dug deep, she just sunk further into her bad ways.

This could so easily have be just another historical romance pot-boiler, but Gaskin had a knack of getting the tone and style just right. Most of her books were well-written, easy to read, with natural dialogue and believable characters. I Know My Love was one of the best examples of her craft (I read at least 12 of her books during the 1980's, so I know my Gaskin's!)

Gaskin was born in Ireland in 1929 but her family moved to Coogee, Sydney when she was only three months old. Her first book was published at age 17.
She moved to London, married an American and lived in New York, then spent some time living in the Virgin Islands before moving back to Ireland. She returned to Sydney at the end of her life, where she died in 2009.

As a teen, I preferred her books set in Australia and in the Caribbean. I loved seeing Australian stories set in places I knew - there were so few of them for a teenage to read when I was growing up. Her Caribbean stories always made me think of Rochester's mad wife in the attic - they seemed exotic, sexy and dangerous to my young impressionable mind!

I was pleased that I Know My Love held up to an adult reread.
I would now classify these books as a comfort read thanks to the nostalgia factor, but probably not books I would seek out now.

I was also reminded why I wasn't surprised about the role of the women during the Eureka Stockade when I read Clare Wright's award winning book, The Forgotten Rebels of Eureka.
Books like this (and Henry Handel Richardson's, Fortunes of Richard Mahony) clearly showed the number and hard-working role of the women who lived on the goldfields of Victoria. It was only the history texts that forgot that women were there!