The Biggest Estate on Earth: How Aborigines Made Australia by Bill Gammage 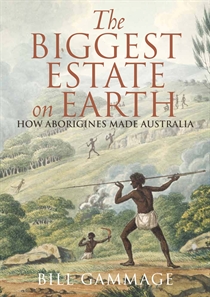 The extraordinary thing about Bill Gammage's award winning book, The Biggest Estate on Earth, is how obvious what he is saying really is when you look at the records - the letters, the journals, the paintings and sketches of early colonial times in Australia.

How on earth did we not see this before?

In every early convict painting, in every journal and in every letter back home, it's there - the park like nature of Australia, the carpets of grass and lightly wooded areas. Some parts thickly clothed in forest with rivers with fordable places as if 'they had been intended for such a purpose.'

Elizabeth Macarthur in 1795 wrote about the area near modern-day Parramatta,


The greater part of the country is like an English Park, and the trees give to it the appearance of a wilderness, or shrubbery commonly attached to the houses of people of fortune, filled with a variety of native plants, placed in a wild, irregular manner.

A few early settlers made the connection between the Aborigines use of fire and these open park-like areas, but they never considered that the Aborigines used fire like Europeans used fences - as a way to create specific spaces for food cultivation, feed for animals, to preserve water and for safety and travel.


Before Melbourne was Melbourne, D'Urville visited the area in 1826 and wrote,


The open terrain is delightfully undulating. Here there are fine stands of trees easy to penetrate, elsewhere vast grass-covered clearings, with well-defined paths are linked one with the other by other tracks so regular and well defined that it is hard to conceive how these could have happened without the help of man.

Australia would have been one wild, uninhabitable place without the careful land management system employed by the Aboriginals. A place that would not have been appealing to Europeans looking for an easy way to rid their own country of surplus peoples!

Captain Cook noted in 1770, that the country was,


diversified with woods, lawns and marshes; the woods are free from undergrowth of every kind and the trees are at such a distance from one another that the whole country or at least a great part of it might be cultivated without being obliged to cut down a single tree.


Gammage relentlessly and persistently drums this message home until even the most reluctant non-believer must see what is so evident in all the paintings and writings from this time. His extensive use of primary sources almost feels overwhelming in sections, as quote after quote is used to support his premise.
If a comprehensive variety of sources and repetition can prove a point, then Gammage should consider his point proved!

In his Introduction, Gammage states,


They first managed country for plants. They knew which grew where, and which they must tend or transplant. Then they managed the animals. Knowing which plants animals prefer let them burn to associate the sweetest feed, the best shelter, the safest scrub. they established a circuit of such places, activating the next as the last was exhausted or its animals fled. In this way they could predict where animals would be. they travelled to known resources, and made them not merely sustainable, but abundant, convenient and predictable.


The Aborigines farmed Australia - every inch of it - for hundreds and hundreds of years - very successfully. It's just that their idea of farming was very different from the European model. Their relationship with the land was also very different. They were eco-warriors even before the term had been invented. They worked with (not against) the natural elements of their environment. They revered them, incorporated them into their religious beliefs and the Dreaming. Country was not to be exploited for human purpose, instead it was something to be shared and nurtured and respected so that it would provide sustenance for all.

Gammage makes extensive use of early paintings to highlight his point. Modern photographs of the same areas show that with the loss of knowledge about how the Aborigines managed the land, it has gone back to wild, dense forest susceptible to intense, unpredictable firestorms.


Many of these early paintings and artists have been criticized in more recent times for their European style. It was said that they applied European standards and saw with European eyes. They didn't accurately represent the Australian environment, making it look too much like an English park, instead of the wild bush we know so well now.

Gammage argues that these artists did use foreshortening techniques and sometimes confused the shadows of clouds for distant land, but that the park-like nature of their paintings not only reflected what was there, but was backed up by what they wrote about in their diaries and letters. The loss of whole areas of kangaroo grassland and yam paddocks means that none of us now appreciate how green and verdant areas of Australia once were.


The more familiar Federation colours and textures of the Streeton's, McCubbin's and Heysen's merely reflected the change of environment since European settlement (loss of top soil, the impact of cloven animals on the native grasses, the planting of European crops).
Combined with the gradual loss of knowledge as the Aborigines sickened and died with European diseases, the undergrowth built up and became messy and wild.

European culture viewed the indigenous way of life as inferior to their own. The newcomers never thought it necessary to ask permission, let alone seek advice on how to manage the country that was their new home.

In his appendix, Gammage addresses his critics and some of the problems brought up by his theory.

For me, I felt the logic and reasonableness of his argument. I was convinced by the considerable number of primary sources and their pertinence. The before and after images of Australian landscapes gave the final persuasive touch.

I'm so glad I finally finished this book (it has taken me three #AusReadingMonth's to do so). The ideas are tantalising and exciting. They gives us hope and understanding for a more productive and respectful way forward.

The pain created by our shared history can only be healed by time.
A new knowledge must eventually replace the lost, but it will only happen when we finally acknowledge the depth and importance of the old ways and the obvious and disastrous disconnect it caused for Australia's first peoples when it was taken from them.

Books like this help to pave the way forward.