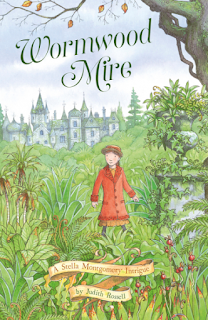 Since that time Rossell has won a slew of Australian book awards whilst a whole gaggle of young readers have been impatiently waiting for the promised follow-up book.

It has been well worth the wait.

Wormwood Mire is even more beautifully presented than Withering-by-Sea.

The green ink font and illustrations generously scattered throughout the book make this a visual feast as well as a glorious, mysterious and slightly magical read.

I was entranced with the new story from page one.

Chapter One reveals a rather Harry Potteresque illustration of Stella sitting in a railway carriage by herself staring forlornly out the window. She has been banished from her aunts for her 'bad behaviour' at the end of the first book. They feel she is in need of proper tuition and education and have decided to send her off to school with her cousins, Strideforth and Hortense.

Fortunately for Stella, the cousins are kindred spirits. Unfortunately for all three of them, the old family home, Wormwood Mire (almost a character in itself) is haunted by a mysterious and sinister creature that lurks in the woods.

The pacing and tension in book two is tremendous. Fast-paced and convincing, Rossell has created a believable world that lives on the edge of feyness. Wormwood Mire is far more complex and engrossing than book one and takes us down a completely different path. A path full of gothic adventure and lots of family secrets.

Stella also learns more about her own past as she and Strideforth and Hortense hunt down the creature that has struck fear into the whole neighbourhood. 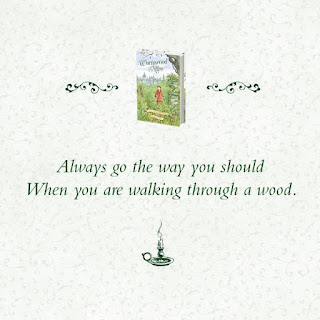 Rossell has left us with lots of tantalising loose ends, which leads me to hope that Rossell is writing book three...and writing it fast!