The Hobbit - the first 5 chapters

Once you start The Hobbit, it's hard to stop or go slow.

It's only the 5th of February and I'm already halfway through. 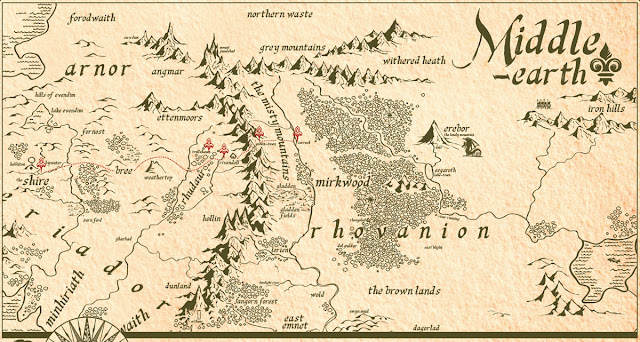 I've been thoroughly enjoying Rick and Nick's Hobbit posts. Nick put me onto Tolkien's On Fairy Tales essay in his first post here (which I have now sourced and will write more on later) as well as his summary of the first four chapters here.
While Rick's entertaining views about the first chapter and Tookishness delve into the humour of Tolkien's writing style.

So far, my reread has revealed to me just how fond I am of hobbits.

I love their cute little hairy feet, their passion for food & second breakfasts and hobbit holes. I admire their hospitality, their caution and their love of home. I enjoy Bilbo's use of language ('bewildered and bewuthered' and 'confusticate and bebother' just to name two delicious examples) and his sense of fun.

All this came back to me in a rush as I was rereading Chapter I - An Unexpected Party.

The omniscient narrator is front and centre in this chapter. Some might find this annoying or intrusive, but I always find it rather comforting. It's like snuggling down into a comfy chair with my Pop, listening to him tell me a story. A story with hints of dangers past and dangers to come.

This is a great introductory chapter.

We learn a lot about Bilbo and Gandalf in particular. Bilbo's feelings about the sudden arrival of all the dwarves is designed to appeal to a child's sense of justice and fairness. It's only natural to feel put upon and used in Bilbo's situation, but Bilbo rises above this childish urge and does the hospitable thing.

It was also a curious thing to see a younger, more carefree Gandalf (than I last saw in the final LOTR movies). Before all the cares and worries of the LOTR action weighs on him, this earlier Gandalf was quite a free spirit - fond of roaming the country, playing up a little, engaging in some mischief making and known for his fabulous firework displays.

The only thing that still bugs me after all this time and all these rereads, are the poems and songs. I simply find them silly and rather lame. In the past, I always skimmed over them, but this time I am making myself read them, in case, somehow they reveal something important.

I'm still not getting it.

After our leisurely, rather fun beginning, chapter two suddenly introduces an element of urgency and haste.

Bilbo thinks he has escaped the adventure of a lifetime when he awakens to find everyone departed. He realises he is actually a little disappointed and annoyed that they went without him, but focuses his ire on the messy state of things that the dwarves left behind them instead.

When Gandalf suddenly reappears and hurries him along his way, we all feel rather flustered and out of sorts along with Bilbo. He is given little choice about whether he wants to go on this adventure or not. His lack of preparation and bumbling arrival at the appointed meeting place only adds to his reluctant, unlikely hero status.

Chapter II is also our first indication that Bilbo will actually rise to the challenge presented to him. When they stumble upon the trolls, it is Gandalf that saves them from their own foolishness. But it is also the beginning of Bilbo's burglary career. It may not be an auspicious start, but we see Bilbo embracing the idea that he could really do this thing.

From danger we return to safety.

Gandalf is back, leading the way - leading them all to the safety and refuge of the Last Homely House at Rivendell.

It is a little difficult to accept that these rather silly, rude elves singing the tra-la-la song, are the same serious, elegant folk that we meet in the LOTR. We are once again reminded, that this particular time, for the most part, was one of peace and ease. A time for silly songs and tomfoolery.

We hear mention of tales of old - the 'wars of the evil goblins and the elves and the first men in the north'. A clever device used by Tolkien to add depth, richness and believability to his created world.

Chapter IV - Over Hill and Under Hill

After our lovely rest cure with the elves, chapter VI drops us right back into the thick of things. Bilbo, Gandalf and the dwarves face violent storms, danger and goblins.

At this stage, Bilbo is still seen as more of a hindrance than a help. Even though it's Bilbo who alerts them to the goblins just in time for Gandalf to escape, he is continually having to be helped along by the grumbling, complaining, faster moving dwarves.

Chapter IV also gives us one of my favourite quotes. 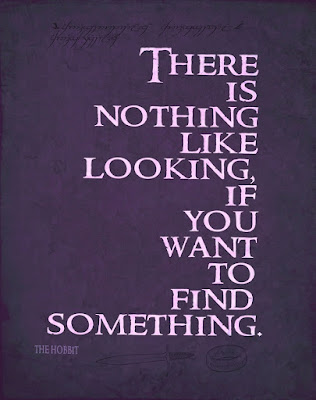 Chapter V - Riddles in the Dark

For Tolkien and LOTR fans, this is one of the most important chapters in The Hobbit. We meet Gollum for the first time and Bilbo finds the ring - the very same ring that The Fellowship of the Ring is named for. This is also the chapter that Tolkien revised substantially when he started working on the LOTR trilogy so that it would more accurately reflect what was to come.

Having never read the original version, I am perfectly happy with this chapters place in the story. Gollum is sufficiently creepy and pathetic, the ring clearly has a long and dubious history while its magic abilities swing between benevolent helpfulness and tricky manipulation.

Luck and its habit of favouring the brave plays a big part in Chapter V - a theme that Tolkien returns to often. Bilbo's 'on we go!' attitude kicks in as he goes in search of the missing dwarves, outwits Gollum with riddles and escapes the clutches of the goblins with the help of the magic ring.

It was at this point that I was reminded of one of Beatrix Potter's Peter Rabbit stories. Poor Peter gets caught in a net in Mr McGregor's garden. It's his large, brass buttons, quite new, that are nearly his undoing. Likewise, Bilbo gets stuck by a large stone blocking the exit to the goblin's cave. His escape is only achieved when all his nice brass buttons 'burst off in all directions.' 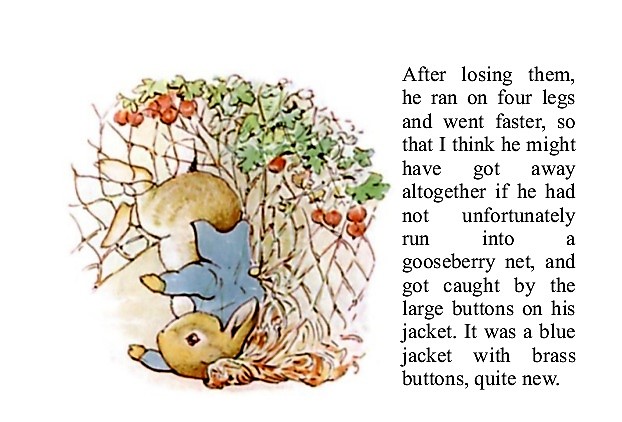 Bilbo feels the same sense of despair at imminent capture, relief at his close escape followed by loss when he realises what he has left behind as Peter Rabbit does. And just like Peter, Bilbo is left wondering how he is going to explain what happened to the others.

I hope you're all enjoying your trip into Middle Earth as much as I am.

My thoughts on Chapters VI to X will be posted in a day or so.

Remember you can share your favourite quotes on twitter or share a picture of where in the world you are reading The Hobbit using #HLOTRreadalong2017.
Posted by Brona Labels Classic, Fantasy, HLOTRreadalong2017, Readalong, Tolkien at 5.2.17
Email ThisBlogThis!Share to TwitterShare to FacebookShare to Pinterest