The Hobbit - chapters VI to X

Well, here we are at the half way mark of The Hobbit.

How are you travelling?

Does anyone need help or inspiration to keep going?


Needless to say, I'm LOVING this reread. It's not only because of the chance to lose myself in Tolkien's world once again, but also the lovely fellowship of readers I've discovered along the way on this particular readalong.

I'm learning a lot about the nature of fantasy, Middle Earth and Tolkien, himself. It's all adding to the richness of this reread.

I'm also really enjoying my illustrated edition of The Hobbit. Alan Lee's pictures are aesthetically pleasing and fascinating - his careful reading of the text means that his use of imagery matches the story in amazing detail. The larger format book is heavy to hold at times (late at night!), but it also feels sumptuous with its shiny, glossy white pages and generous margins.

If you would like to catch up on chapters I to V of our The Hobbit readalong, click here.

Chapter VI - Out of the Frying-Pan into the Fire

Tolkien keeps the action buzzing along in chapter VI. Bilbo may have escaped the clutches of the goblins, but he has lost the dwarves and the goblins are preparing to give chase.

It doesn't take him long to discover Gandalf and the dwarves. He decides to keep his discovery of the ring a secret, preferring to let the dwarves think of him as being particularly resourceful, skillful and clever. Gandalf, of course, suspects there is more to the story.

Wargs and eagles also make an appearance in this chapter. We see a definite pattern beginning to develop in Tolkien's world when it comes to his many creatures. Those that have an affinity with nature and the world around them tend to be the good guys (elves, eagles, hobbits). Those that wreck havoc on their environment with poor management and machines are the bad guys (goblins, wargs, trolls).

As many of my regular readers know, I often have problems with talking animal stories. This is one of those stories, when it doesn't worry me at all. Talking wolves and eagles simply fit logically and naturally into this world.

The only time the whole talking animals thing felt a little off, though, was in the very next chapter.

Chapter VII brings us to another place of refuge and safety to catch our collective breaths.
The arrival of the dwarves at Beorn's house harks back to events in the first chapter, when Gandalf (& Tolkien) had the dwarves arriving at Bilbo's house in ones and twos. Gandalf uses the same tactic on the unsuspecting, unsociable Beorn.

Like Bilbo, he ends up accepting everyone with good grace and generosity. Beorn provides the company with a lot of detailed advice about how best to proceed through Mirkwood Forest and also sets them up with much needed food and water.

I confess that I'm a little in love with Beorn & I always enjoy Bilbo's sojourn in his company.

Every time I read about him, I am reminded of my favourite childhood fairy tale - Rose Red and Snow White. My edition was a Little Golden Book with illustrations by Gustaff Tenggren. There was something about the man trapped inside a bear that worked powerful magic on my younger self. I used to pour over the illustrations and reread the book countless times. 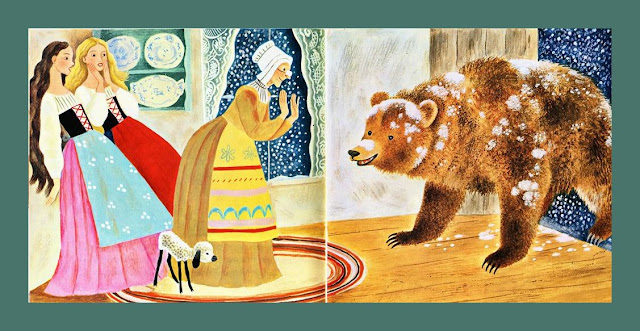 Beorn's ability to shape shift between man and bear intrigues me. There's something about his dark, quiet presence as he watches over part of their journey to Mirkwood, that I find comforting.

I'm sure it says something deep and psychological about myself that these brooding, faithful bear men hold such appeal, but that's for another day!

Now back to those talking animals!
Talking bears are fine, but Beorn's tame animal helpers just feel wrong and seem out of place. Sheep and ponies and dogs that can lay a table, make a bed and carry chairs - really?!

Besides having a chance for some much needed R & R at Beorn's, the other important reason for this chapter is the warning - DONT LEAVE THE PATH. By the third warning, we know exactly what will happen in the next chapter!

That's right, they leave the path.

Gandalf has also left them. The dwarves and Bilbo enter Mirkwood by themselves. It is here, however, that Bilbo really comes into his own. He shows himself to be clever (with the boat), brave (with the spiders) and a leader (in Thorin's absence).

Tolkien gives a nod to the traditions of older mythologies, when Bilbo names his sword. Only bona fide heroes get to name their swords (think King Arthur). Tolkien also engages in more world building in this chapter with an explanation about who the wood elves are and why they feel animosity towards dwarves.

Chapter IX - Barrels Out of Bond

Here we see Bilbo take charge completely. He plans their escape from the wood-elves prison. He proves himself to be resourceful and lucky once again.

The wood elves of Mirkwood are not as friendly or as gracious as Elrond at Rivendell or the LOTR elves (Tolkien explained why in the previous chapter). But they are still elves - good people - which means that the dwarves and Bilbo are in no real danger. They are simply stuck. Time is passing and they need to get on with their quest.

It is Bilbo that makes this possible.

As they float down the Forest River towards Long Lake, Bilbo spots the Lonely Mountain for the very first time, and it strikes fear in his heart.

Tolkien introduces us to the men of Lake town and provides more history and back story for his created world.

Chapter X feels like a transitional chapter.
We have left the dangers of Mirkwood and the first part of the journey behind. The end is now in sight.

In Lake town we all pause to celebrate and recuperate.

We are also suddenly caught up in the euphoria of wishing and hoping for better days. Fantasy fulfilment is just a hair's breadth away - the return of the king is nigh - all the old glorious prophecies could finally come true! A happy ending is foretold.


It was here that I suddenly realised that there are no women in The Hobbit.

I'm sure this has been noted elsewhere by others before me, but the only female mentioned so far, is back in chapter I, when our omniscient narrator talks about Bilbo's mother, Belladonna Took.

We get through the entire Lake town celebration without the pronoun 'she' being used once. Women don't even seem to fill any of the more traditional roles - they don't serve food, clean, nurse the sick or cry into their hankies as they wave off their brave men-folk. It's all very curious. Where are they?

Even the spiders in Mirkwood are only ever mentioned by the pronouns 'it' and 'they' - I just went back and checked!

How did this happen? What does it mean?
Does it matter? 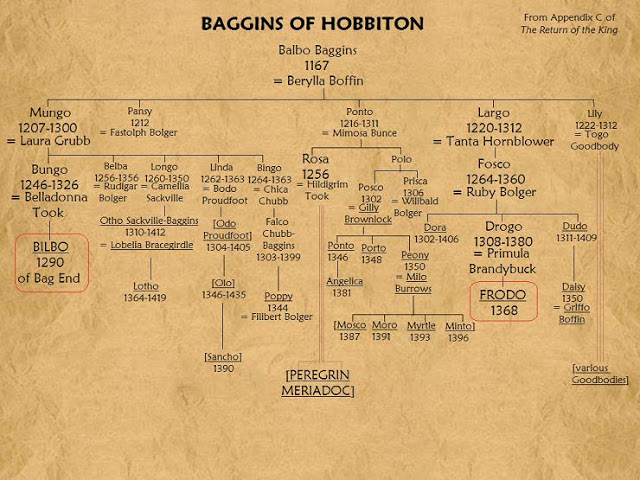 A few women appear in LOTR, but not many. Is this simply a sign of the patriarchal times that Tolkien lived in? Or did he have problematic relationships with the women in his life? Perhaps The Hobbit is just another version of the boys' own adventure stories from that era? Some men can write the female perspective really well, and some men can't - perhaps Tolkien was one of these?

A quick internet search reveals two more possibilities. One is to do with Tolkien's early life - his parents died when he was young and he was sent off to all boys schools and college. When he completed his Oxford English language and literature degree in 1915 he enlisted. In 1916 he was sent to France and saw action at the Somme. His later working life was also spent as an Oxford don - in an almost male exclusive environment. It could, therefore, be argued that there simply were not very many women in Tolkien's life.

Tolkien met Edith Bratt, another orphan when she was 19 and he was only 16. They lived in the same boarding house. Tolkien's guardian, Father Morgan, did not approve of the romance and forbade Tolkien to keep on seeing Edith until he was 21. Apparently he followed this edict to the letter for nearly three years - only writing to Edith again on the night of his 21st birthday in 1913 to propose marriage! Edith broke off another engagement and reluctantly converted to Catholicism for him (and as we know, the Catholic religion was not usually known for its inclusion of women in any of the stuff considered truly important).

Edith and John married three years later. They had three sons and one daughter.
It could also be said that Tolkien had a tendency to put women up on a pedestal, as evidenced by his portrayal of his two main LOTR elven princesses - Galadriel and Arwen - two strong, glamorous, aloof women who remain childless. (Tolkien also apparently based the beautiful elven princess, Luthien, in LOTR on Edith).

The other internet option put forward is to do with Bilbo.
Most of The Hobbit is from his point of view. He is shy, introverted and a lifelong bachelor. He doesn't really see women therefore there are no women in the story.

What do you think?

Letter 43 - From a letter to Michael Tolkien 6-8 March 1941 [On the subject of marriage and relations between the sexes] provides some insight into how Tolkien viewed women, and relationships in general, through the lens of his Catholicism (if you're interested).