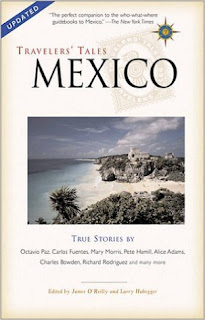 I do like to hunt down books that are set in the country or region that I'm visiting.

Our recent trip to Tulum on the Yucatan Peninsula in Mexico though proved to be a bit of a challenge. I couldn't find any fiction (in print) for this area, although I did find a Moon travel guide dedicated to Tulum.

I eventually unearthed Travelers' Tales Mexico edited by James O'Reilly and Larry Habegger and bought it hoping that some of the tales would be about the Yucatan.

Only one of the tales had an obvious reference to the Yucatan Peninsula, The Underground World of the Yucatan (1994) by Richard Bloom.  ♠♠7♠♠

He gave us a brief history about the formation of cenotes - 'sinkholes with trapped water' and their importance to the original inhabitants of the region - before introducing us to Leonardo Pacheco Cohuich, a guide at Las Grutus de Loltun, Dzitnup & Las Grutus de Balankanche. We learnt a little Mayan and Toltec history as well as touching on the meaning of some of the local cave paintings.

Sadly, we did not have time to visit this particular site ourselves, and the essay was too short to do more than tease and tantalise this particular reader! However, we did pop in for a refreshing swim at Gran Cenote near Tulum after a hot morning walking around Coba Archaeological ruins. 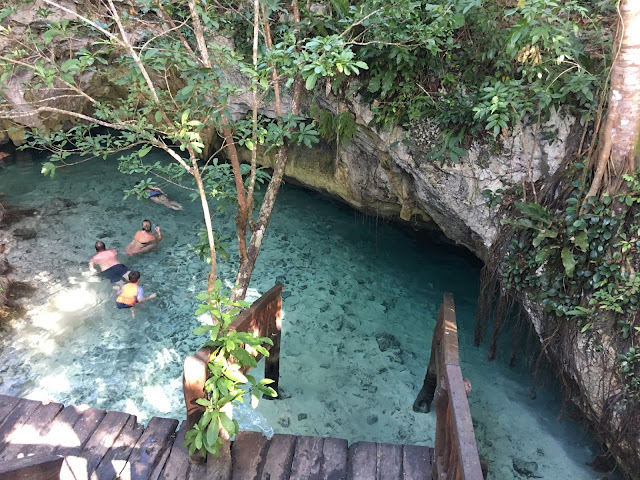 Crossing the Linguistic Frontera (1994) by Joel Simon promised a little more Yucatan flavour with it's subtitle, A Yucatan bus trip becomes a window into Mexican life. Simon and his wife, learnt a lot about patience, the meaning of the word 'full' and the Mexican approach to time and schedules.

Lessons we also learnt during our travels around Cuba, more so than during our brief time in Tulum. ♠♠8♠♠

One of the lengthier tales was Welcoming the Spirits on Janitzio Island  (1994) by Jeff Greenwald which described the Day of the Dead, Dia de los Muertos, ritual as celebrated in one particular community.

It was a poignant and informative piece that also highlighted some of the problems with over the top tourism. ♠♠9♠♠

Finding Frida Kahlo (1990) by Alice Adams has convinced me that I would love to return to Mexico to learn more about Kahlo and see more of her art in situ. ♠♠10♠♠

While the last two pieces that I read - The Evolution of La Frontera (1992) by Richard Rodriguez ♠♠J♠♠ & The Border (1994) by William Langewiesche ♠♠Q♠♠ were selected to help me understand the complicated relationship between Mexico and its northern neighbour. Given that we were in Mexico during Trump's inauguration, the relationship between these two countries was much in the news and on our minds.

During our travels, we also realised that despite being critical and thoughtful users of news and media services throughout most of our lives, we had still absorbed, quite unconsciously, a very North American view of Mexico. It only took a few short days, and a couple of fortuitous conversations with Mexicans to see that our preconceived ideas were based on misinformation and prejudice.

Mexico is a much bigger, more complex and nuanced country than we had been led to believe. We experienced no danger, no drugs and only one trickster. We ate delicious, fresh, locally sourced food, saw some amazing sites and learnt so much about Mayan history, that my head is still spinning!


Travelers' Tales Mexico was a great way to get a little insight into the Mexican way of life.
The only beef I had with the layout of the book were the text boxes on the side. Although they were usually linked to the main idea of the essay, they distracted from the reading of said essay. Should one read them on the page as they appeared, or remember to come back at the end of the essay? Neither approach was very satisfactory. The first broke the rhythm of the essay, while the second was often hard to remember to do!

I didn't read all the essays this time around, but I did read all the text boxes - they covered everything from stuff to do, history, food, places, language, stories and useful tips.

Hopefully we will return to Mexico one day, to give me an excuse to read more of these essays in depth, but for now, the six tales above form the first part of my #DealMeIn short story challenge (full details here).

I'm playing with an Australian euchre pack - 32 cards - & I had a lot of fun searching out different designs on google!

Posted by Brona Labels Deal Me In, Mexico, Non-Fiction, Short Story, Travel at 4.2.17
Email ThisBlogThis!Share to TwitterShare to FacebookShare to Pinterest