Breakfast at Tiffany's by Truman Capote

I hadn't realised that Truman Capote's Breakfast at Tiffany's was a novella - only 100 pages in my sweet little pink Popular Penguin. Not that I'm complaining. Brief is good for me right now. 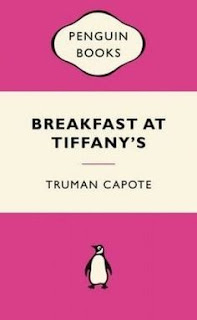 There's probably not much more I can say about the actual story of Breakfast at Tiffany's that hasn't already been said. Yes, the book is different to the movie. Capote clearly tells us that Holly has 'boy's hair, tawny streaks, strands of albino-blonde and yellow', yet it is impossible to read this story now without Audrey Hepburn in mind.

The book is seedier, grittier and less romantic than the movie. But in both, Holly comes across as being extremely young and naive (she loves Wuthering Heights after all - the ultimate symbol of young, naive passion). She's looking for love and belonging in all the wrong places. She allows herself to become a kept woman and keeps everyone at arm's length, even the cat.

She's described as being a phony (although a 'real phony. She believes all this crap she believes') and a liar. I'd like to say she was at least true to herself, but that was the part she hadn't worked out yet. She was still searching; trying on different parts; hoping, wishing, longing for something more or something different.

You call yourself a free spirit, a "wild thing," and you're terrified somebody's gonna stick you in a cage. Well baby, you're already in that cage. You built it yourself. And it's not bounded in the west by Tulip, Texas, or in the east by Somali-land. It's wherever you go. Because no matter where you run, you just end up running into yourself.


You're left hoping, that Holly will one day, like the cat, stop running and find a home where she feels that she belongs.

The other three stories are much slighter and quite different in tone and subject matter. I guess you could say that they represent a good cross-section of Capote's writing style, except the sum total of my knowledge about Capote's work is now contained in these four stories. So what would I know!

House of Flowers is set in Haiti featuring a young girl, Ottilie, who has found her way into prostitution. Like Holly, she longs to know what love is and to feel a sense of belonging. For Ottilie this means returning to the Mountains of her childhood and facing the hostility of an older, dying woman. The story seems to be about the battle for power between the two women, with the younger coming off the ultimate winner. Her old life is quickly forgotten as the age-old juggle/struggle for power begins with her new husband.

By the time I had got to the end of A Diamond Guitar, I realised that love and belonging were major themes for Capote. I also found a sense of nostalgia and yearning prevalent in all of his pieces. This one is a prison story - not one of those harsh, cruel prison stories full of depraved beings, on both sides of the wire - but one that focused on friendship, longing and memory with maybe just a hint of gay love.

The final story, A Christmas Memory, is apparently an American classic, but one I have never heard of before. A quick google revealed that there was an autobiographical element to the story, which made it more interesting and enlightening. Capote's writing was obviously his way of searching for the love and belonging that was missing from his childhood. This reminded me that the only thing I had known about Capote before reading these stories was his childhood friendship with Harper Lee. Apparently Sook, the elderly cousin that featured in his Christmas stories, was befriended by Capote during this same time.

I love how books can find connections with other books purely by chance. I'm currently reading Lincoln in the Bardo. Capote's descriptions of Sook made me smile,


Her face is remarkable – not unlike Lincoln's, craggy like that, and tinted by sun and wind.


It gave me an instant affection for her. 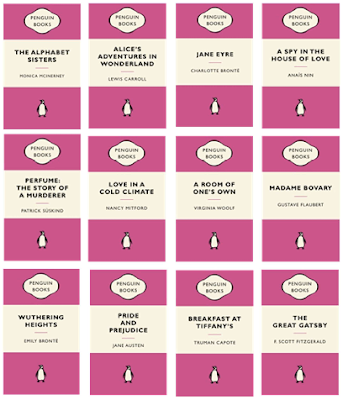 I'm not sure if other countries produced pink popular penguins, but in 2013 Penguin Australia teamed with the McGrath Foundation to help raise money for Breast Care Nurses in communities all around Australia.

Glenn McGrath was a prominent Australian cricketer a number of years ago. His wife Jane sadly died of breast cancer in 2008. She was only 42. They started the McGrath Foundation together in 2005. Currently 117 Breast Care Nurses have been placed in various communities around Australia.

• Breakfast at Tiffany’s by Truman Capote

• Pride and Prejudice by Jane Austen

• Perfume: The Story of a Murderer by Patrick Suskind

• A Room of One’s Own by Virginia Woolf

• Love in a Cold Climate by Nancy Mitford

• A Spy in the House of Love by Anais Nin.


This is my seventh completed book & review for #20BooksofWinter.
I've half read two others on the list.
There is a grandness in my ability to fail reading challenges!
Posted by Brona Labels 1001 Books, 20 Books of Winter, Classic, New York, Short Story at 20.8.17
Email ThisBlogThis!Share to TwitterShare to FacebookShare to Pinterest