The Vanishing Futurist by Charlotte Hobson

I found the The Vanishing Futurist to be a rather peculiar read.

I'm always fascinated by the Russian Revolution and this was a curious and different angle from which to view it. But it was rather weird reading a book that I wasn't completely sure if I was enjoying it or not. The cover by LaBoca, on the other hand, I adored every time I saw it! 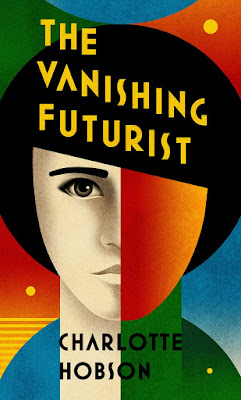 I loved learning about Russian avant-garde art which I knew next to nothing about before. I also wasn't aware of the English governesses who travelled to Russia at the turn of the century and got caught up the revolutionary fervour of the times.

The disintegration of Russian society, the poverty, the hardships and how so many of them simply adapted to and accepted the massive changes was, as always, mind-boggling. And how quickly society, just with different faces in charge, reverted back to those who had stuff (including the power) and those who didn't. How idealism quickly turned to cynicism, hope became drudgery and freedom lost out to total control.

Less convincing was the love story between Gerty and Nikita, mostly because I wasn't sure that I liked either of them very much. It took me quite a while to work out all the people living in the IRT commune, I kept getting them mixed up - perhaps not enough character development to make them gel for me? The sudden jumps forward to modern day Gerty writing her memoirs for her daughter in England also felt a little contrived.

I quickly learnt that it is,

Sponsored by Sir Walter Scott’s distant kinsmen the Duke and Duchess of Buccleuch, the Prize celebrates quality, and innovation of writing in the English language, and is open to books published in the previous year in the UK, Ireland or the Commonwealth.

Reflecting the subtitle ‘Sixty Years Since’ of Scott’s most famous work Waverley, the majority of the storyline must have taken place at least 60 years ago.Honouring the achievements of the founding father of the historical novel, the Walter Scott Prize for Historical Fiction is one of the most prestigious literary prizes in the world. With a total value of over £30,000, it is unique for rewarding writing of exceptional quality which is set in the past.

The Prize was founded in 2010, and is awarded at the Borders Book Festival in Melrose, Scotland, in June every year. The winner receives £25,000 and shortlisted authors each receive £1000.

What an amazing feast of historical fiction!
I have now created a page so that I can follow this award in the future (see pages tab on right hand side of this blog).


I'm glad I finished the book because I do love learning about new-to-me stuff.

The Russian avant-garde movement began around the 1890's under the Tsarist Empire and wound up by the 1930's (although these dates are often debated). It included Suprematism, Constructivism, Russian Futurism, Cubo-Futurism, Zaum and Neo-primitivism.
The Russian avant-garde reached its 'creative and popular heights' during the 1917 Revolution, but eventually it clashed with the newly emerged ideals of Socialist Realism (which 'is characterized by the glorified depiction of communist values, such as the emancipation of the proletariat, by means of realistic imagery') Wikipedia

Anna Aslanyan summed up her review on The Vanishing Futurist in The Spectator with,

The disappearing act at the centre of the plot serves as a powerful metaphor for the demise of revolutionary art. The fate of the idealist inventor anticipates that of the Russian avant-garde, best described by Bruce Chatwin in his 1973 essay: ‘The Party did squash it. But it also died of fatigue.’

If this era intrigues you as much as it does me, you might like to check out these Russian avant-garde articles:

I can feel a new obsession percolating!