The Diary of a Provincial Lady by E M Delafield

Delafield was born in Sussex on the 9th June 1890  and died 2 December 1943, heartbroken after the death of her son Lionel in 1940. She was the daughter of a Count and married a Colonel, the younger son of a Baronet. She wrote over 40 stories and novels and was hugely popular in her day. Most of her stories have gone out of print, but her semi-autobiographical book The Diary of a Provincial Lady has never lost favour with the reading public.
Delafield became the director of Time and Tide, a feminist magazine in the 1930's. The editors were looking for more light stories to serialise, she promised to give it some thought, and before too long The Diary of Provincial Lady was born.

Many of the stories feature the children, Robin and Vicky, who were based on those of her own children, Lionel and Rosamund. The Diary also highlighted the financial difficulties of being married to a Baronet's younger son. The expectation by society and family to maintain a certain standard, but without any of the means to actually do so.

Lady B asks me how the children are, and adds, to the table at large, that I am 'A Perfect Mother'. Am naturally avoided, conversationally, after this, by everybody at the teatable. Later on, Lady B tells us about the South of France. She quotes repartees made by herself in French, and then translates them. (Unavoidable query presents itself here: Would a verdict of Justifiable Homicide delivered against their mother affect future careers of children unfavourably?) 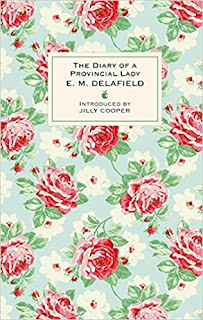 Part of the charm of the book lies in the fact that her social dilemmas are ours. We've all been outwardly polite, but inwardly squirming, to the over-bearing busybody, the know-it-all or the bumbling aunt. We've all put on our best faces in public or gossiped about our neighbours. And we've all been shown up by the innocent comment of a child.

Delafield's characters feel real because they are, in fact, based on real people. How on earth she got away with it and was still able to walk down her local High Street remains a mystery!

In the preface to The Way Things Are (1927) Delafield wrote: "A good many of the characters in this novel have been drawn, as usual, from persons now living; but the author hopes very much that they will only recognise one another".

Perhaps our inability to see ourselves as others see us saved Delafield from social exclusion and accusations of slander.

Conversation turns upon Lady B. and everyone says she is really very kind-hearted, and follows this up by anecdotes illustrating all her less attractive qualities....Feel much more at home after this, and conscious of new bond of union cementing entire party.

I wasn't always convinced that I was enjoying this book as I read it though. However during the week or so it has taken me to prepare this post, I've come to appreciate it more and more. The daily vignettes, social niceties and character sketches have grown to be more meaningful and pertinent with each passing day. The book grows better on reflection. The pretty cover certainly helps too!

Exchange customary graceful farewells with host and hostess, saying how much I have enjoyed coming.

(Query here suggests itself, as often before: Is it utterly impossible to combine the amenities of civilisation with even the minimum of honesty required to satisfy the voice of conscience? Answer still in abeyance at present.)

The Things I liked about Delafield and her Diary

The Things I didn't like about Delafield and her Diary

I'm glad I read it. I may even reread it one day, but I don't feel compelled to read the other Diary books or seek out the other 30-odd novels to her name.

The Diary of a Provincial Lady was my latest #CCspin book for The Classics Club. How did you fare?
Posted by Brona Labels CC Spin, Classic, Diary, Family Life, Humour at 29.12.17
Email ThisBlogThis!Share to TwitterShare to FacebookShare to Pinterest