Flight From the Enchanter by Iris Murdoch

Flight From the Enchanter by Iris Murdoch was her second book published in 1956. However, there is evidence that it was the first book she actually penned, according to Patricia Duncker, who wrote the Introduction in my edition. 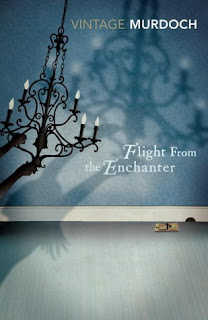 Either way, Flight From the Enchanter is an assured piece of of writing by an emerging writer. But what does it all mean?

I found myself asking the same question when I finished Under the Net last month. It would seem that Murdoch preferred to write set pieces loosely linked together with apparent randomness and bizarre coincidences. These set pieces were often gorgeous pieces of writing. I will never forget Annette swinging from the chandelier as she leaves formal education to embark on the School of Life! Or, Annette again making an international call 'opening out telescopically, section after section.'

What did Annette actually learn though? Let alone any of the other characters.

Annette learnt about the lure of fascination and sexual politics when they made an appearance in her syllabus. But the lesson learnt, or the answer to the muddle, seemed to be found in running back to mummy and daddy.

Rosa allowed herself to become enmeshed in a sexual power play and a weird kind of cold war comic menace with the Polish brothers, Jan and Stefan.

John got caught up in office politics and an early wave of feminist action. He had no idea whatsoever how to act around women of any age.  The only reason someone as inept and as pathetic as he was had 'achieved' as much as he had was thanks to the old boys club mentality.

Peter suffered from translator blues. He worried about individual words and meanings and headed off on tangents. He was another ineffectual man bumbling along looking for a saviour.

Nina was an outsider open to manipulation and to being forgotten.

Mischa seemed to be the power base or the saviour that everyone else gravitated towards. He was mysterious and romantic with his Continental connections and obscene wealth.

But I think that Calvin was the real power behind the throne. He manipulated everyone, including Mischa. The real menace emanated from his machinations. Was he being guided by Mischa? Probably, but I suspect he also took matters into his own hands, to get what he wanted. And he definitely didn't want Mischa and Rosa together again.

One thing all these rather odd characters all had in common was their inability to act responsibly and decisively. They drifted and wafted and let themselves be manipulated. All except, Calvin Blick.

What did we learn? What did all these characters learn?

I'm really not sure, but it was a fascinating journey anyway.

More reviews for FFTE can be found with Liz @Adventures in Reading.

Under the Net
#IMreadalong
Posted by Brona Labels Classic, IMreadalong, Readalong, Reading England, WCLC at 9.2.18
Email ThisBlogThis!Share to TwitterShare to FacebookShare to Pinterest