Any Ordinary Day by Leigh Sales

It's hard to sum up what an extraordinary read Any Ordinary Day by Leigh Sales really was. I started off a little sceptical, doubtful that Sales would find the right tone to keep me interested, but I was wrong. Very wrong. 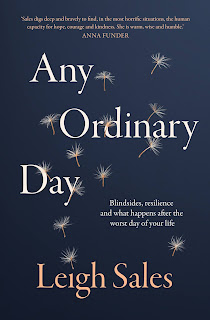 I thought I knew what the book would be about thanks to the generous media and online coverage it had been receiving in Australia in the lead up to Christmas. I also had Nancy's unequivocal admiration for the book ringing in my ears. I was expecting to read about some of the (sadly) well-known names in Australia who had survived tragedies such as the Lindt Cafe siege, the Port Arthur massacre and the Thredbo disaster; I wasn't expecting to read about an acquaintance of mine though.

Any Ordinary Day was a riveting read. Heart-breaking at times, but so full of compassion, kindness and a desire for genuine understanding, that it melted my cynical side completely. But when I reached Chapter 6 and suddenly realised that this section was Leigh's interview with Hannah Richell about the surfing accident that took the life of her husband, Matt a few years ago, I was pulled up short.

Suddenly it felt very personal and very close to the bone.

As Sales' said early on, the idea behind this book was to explore how we cope with not being 'exceptional' when we discover that we're as 'vulnerable as the next person' to being blindsided by life and death moments. Matt's accident, and Hannah's extraordinary blog about her journey with grief and sadness, have left me pondering this idea often. How do we develop resilience? How do we learn to let go the idea that we have complete control over our lives? How do we cope with the randomness of life? Can we become a better person for having gone through something so traumatic?

Sales' spends some time within each interview discussing these ideas, as well as bringing in various facts and stats from current research findings. Every interview was thoughtfully conceived and executed. She discussed the personal as well as the bigger picture stuff. She considered why it is that we're all fascinated by these traumatic events and why we participate in mass displays of grieving like those that happened after Princess Diana died and the floral tributes in Martin Place after the Lindt Cafe siege.

The role of journalists, media and social media are explored, as well as the negative and positive outcomes experienced by individuals caught up in this kind of craziness when they're at their most vulnerable.

because we don't have enough conversations about the big stuff, about life and loss and fear, we end up approaching death with morbid fascination, like it's some dark awful secret or some big heroic event.


This book is all about reminding us that the big stuff can happen at any time and that we should remember to be grateful for, a savour, the everyday, ordinary moments, for 'they're not so ordinary, really. Hindsight makes them quite magical'.