The Story of a Baby by Ethel Turner

The Story of a Baby by Ethel Turner was a rather sad, and unexpected excursion into young love, an early marriage and societal expectations about gender roles. In this short story, Turner also took a rather nostalgic look into the changing face of Sydney and it's outer suburbs in the late 1890's. 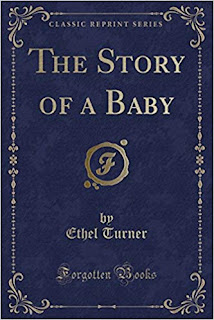 In cool weather the Red Road was very pleasant walking. It wound up hill and down dale for many a mile till it reached Hornsby, and branched away into different country.

All the way there were gum trees - gum trees and fences; here and there were closer palings and garden shrubs indicating human residence, but they were far apart and the road was lonely. Parallel to it and showing in places between the trees was the single line of the railway. It did not spoil the scenery at all, it rather gave a friendly look to it and reminded the pedestrian that in spite of the bush silences, the towering trees, the vista of the blue hills and mountain-like freshness of the air, he could be in all the buslte and happy fellowship of town in half-an-hour....

In a few years the beautiful countryside will be commonplace suburbs;there will be stucco villas and terrace houses, shops and paved roads; the railway has broken its fastness and the change is inevitable.

The smooth grass slopes, the wooded stretches will live only in memory. The great read and black and silver-limbed gums will be hewn down to make way for spreading civilisation. The blue gracious hills will be thick with chimneys and advertisement boards. There will be a double line of railway, no longer picturesque, and big spreading stations instead of primitive sidings where one held up a 'flag by day and a light at night' to be picked up of the passing train.

I do love these glimpses into a time gone by. What looks old-fashioned and parochial to our modern eyes was once modern and new to those who lived it. It's a good reminder that our modern times will one day be considered old-fashioned to future generations. It's an idea I wish I could impart to B21 and B18, who seem utterly oblivious to history and their place in it.

Struggling to find one's place is a major theme of The Story of a Baby. Sadly this struggle becomes a battle of wills that ends disastrously for the young family. Dot believes that 'no one literally interpreted that word 'obey' in the marriage service, now that the equality of the sexes was recognised'. Whereas Larrie believes that 'I am your master, and I intend you to know it from this day.' Things rapidly go downhill from here.

Neither parties were particularly sympathetic characters and I ended the story feeling rather sorry for the young baby who was caught in the middle.

I wasn't expecting a battle of the sexes to be at the heart of a story written in 1896. But according to Turner, this kind of thinking was commonplace in the younger generation,

She was going to make this strike for her rights, and in future have the independence due to the nineteenth century married woman.

Perhaps the reason I've been woefully unaware of the nineteenth century feminist perspective before this, is that most of the authors I've read from this era are male?

Previous Ethel Turner posts:
Seven Little Australians
In the Mist of the Mountains