The 1st March is St David's Day in Wales - the day we celebrate all things Cymraeg (Welsh). It is also the start of Paula's month-long #Dewithon19 event @Book Jotter. Simply read and blog about books set in Wales or written by Welsh authors.

I have had a copy of How Green Was My Valley by Richard Llewellyn on my TBR pile for years. I've been saving it to read this month and am quite excited about getting stuck into it.

Now you may be wondering why someone on the other side of the world, in NSW, Australia is getting excited about #Dewithon19. There are oodles of very good reasons.

The NSW part, mentioned above, is the first give away. When Captain Cook sailed to Australia over 200 years ago, and spotted the green hills and rugged coastline of this huge eastern land, they apparently reminded him of the coastal areas of South Wales, especially the Vale of Glamorgan.

When the First Fleet sailed into Sydney Harbour in 1788, it contained six Cymreag - four men and two women - convicts.

That's how most of the Welsh ended up in Australia, including one of my great, great, great grandfather's, Robert Llewellyn, for stealing a copper furnace. That is, until the gold rush era in the late 1800's, when a large number of Welsh, Irish, Scottish and British young men, including my great grandfather, Stephen Ball, made their way to Australia via the Californian goldfields.

My mother embraced her Welsh heritage by naming her eldest daughter, Bronwyn, an Anglicized version of the Welsh name Bronwen.

I then, had the pleasure of visiting my third cousins, on the Ball side of the tree, who still lived around the Pendoylan, Llantrissant area of Wales, 30 years ago. We visited family graves, the old family farm and had a fabulous time marvelling over family resemblances three branches down the tree. I had hoped to finally find my name printed on mugs, key rings and pencils whist in Wales, but it turned out to be an old-fashioned name, no longer in favour in Wales. There are probably more Bronwyn's in Australian than in Wales these days! So no Welsh key ring with my name on it.

Ever since, I've been meaning to read more about Wales.

Over the years, I've found a few books with a Bronwen/Bronwyn protaganist. Testimonies by Patrick O'Brian (although this particular Bronwen came to an untimely end if I remember correctly) and Bronwyn's Bane by Elizabeth Ann Scarborough (which featured a cursed, giant-like Princess Bronwyn) spring to mind. Each time it gave me a ridiculous thrill to see my name in print. But to say I was delighted last night, when just a few chapters into How Green was My Valley, I discovered that one of the brothers had married a lovely, lovely Bronwen from the neighbouring valley, would be an understatement!

The perfect way to start #Dewithon19. 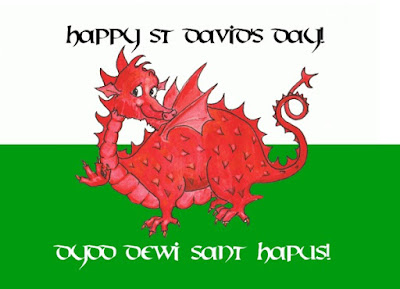 Also on my TBR pile as possibilities for this month are On the Black Hill by Bruce Chatwin, The Mabinogion and Under Milkwood by Dylan Thomas.
Posted by Brona Labels Dewithon, Wales at 1.3.19
Email ThisBlogThis!Share to TwitterShare to FacebookShare to Pinterest