Jamaica Inn was my latest CC spin choice. I also realised recently that I would be able to join in Heavenali's Daphne Du Maurier reading week too, provided I got my review done on time. So here we go! 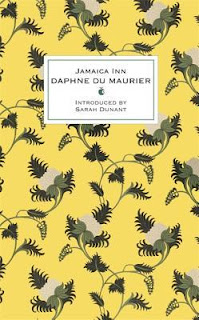 My Du Maurier journey began many, many years ago when I read Rebecca, undoubtedly her most famous novel. I was left feeling rather underwhelmed. It was okay but not amazing or even particularly memorable, in my opinion. I thought that would be that regards DDM.

About a decade later, in 2007, I was travelling around England, with Mr Books for the World Cup, when in a gorgeous B and B near Hadrian's Wall, I discovered a copy of Mary Anne. The first pages had me hooked. This story - part family history, part fiction was just the right thing at the right time. I left behind my just-finished (and unloved) copy of Chesil Beach (that's another story entirely) and invited Mary Anne to join me for the rest of our trip.

A few years back a CCSspin gave me My Cousin Rachel. I was a little cautious in my approach but ended up loving the psychological tension that oozed off every page. DDM was definitely back in my good books.

Which brings us to Jamaica Inn. I found it to be a very light, easy gothic mystery romance. It was enjoyable, although predictable. The romance was less gushing, soft romance and more realistic, making-the-best-of-a-(possible)-bad situation, while the mystery was carefully plotted tension rather than seat-of-your-pants terror.

On reflection, Jamaica Inn was less gothic and more an interesting dip into the mind of an alcoholic. His psychological pain was sympathetically drawn by Du Maurier, curiously more so than the obvious and devastating pain suffered by Aunt Patience at his hands.

The pretty, pretty VMC cover (designed by Neisha Crosland) added to my pleasure.

Du Maurier tells us in a note at the start, that Jamaica Inn is a real place, while Annabel @Shiny New Books fills in some of the blanks:


Jamaica Inn, the setting for her famous novel of 1936, sits high on Bodmin Moor in Cornwall. It was built in 1750 as a coaching inn and was a stopping-off place for many a smuggler. Du Maurier stayed there in 1930, and when out riding with her friend Foy Quiller-Couch got lost in the fog – but their horses returned them safely. This experience and hearing the tales of smuggling and ghosts associated with the inn inspired Daphne. These days, the lively inn is a famous tourist destination.

Favourite or Forget: Enjoyable but forgettable.

Facts: Made into a movie by Alfred Hitchcock in 1939, an ITV series in 1983, adapted for the stage by David Horlock in 1990 and a BBC adaptation in 2014.
Posted by Brona Labels 1936, CC Spin, Classic, Gothic, Readalong, Reading England, Relationships, Virago Modern Classic at 15.5.19
Email ThisBlogThis!Share to TwitterShare to FacebookShare to Pinterest