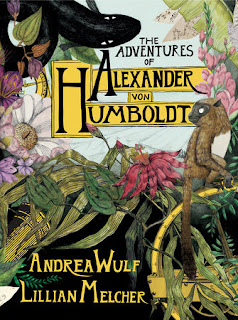 From the New York Times bestselling author of The Invention of Nature, comes a breathtakingly illustrated and brilliantly evocative recounting of Alexander von Humboldt’s five–year expedition in South America. Humboldt (1769-1859) was an intrepid explorer and the most famous scientist of his age. His restless life was packed with adventure and discovery, but his most revolutionary idea was a radical vision of nature as a complex and interconnected global force that does not exist for the use of humankind alone.

To celebrate Alexander von Humboldt’s 250th birthday in 2019, Andrea Wulf partners with artist Lillian Melcher to bring this daring expedition to life.Inspired by his diaries, plant specimens, engravings, sketches, maps and drawings, Wulf tells this story from a completely new perspective, revealing a man who was not only the most famous scientist of his time, but who also believed that the arts and sciences were intrinsically connected. Melcher’s stunning illustrations bring alive Humboldt’s adventures, from his dangerous river journey along the Orinoco to his spectacular climb of Chimborazo.

The Adventures of Alexander von Humboldt tells a story of hardship, danger, excitement and discovery, but also of Humboldt’s encounters with the natural world, the indigenous people of South America and his early warnings of harmful human-induced climate change. The result is a lush and thrilling journey of discovery through Humboldt’s years in South America.


I wanted to love this book so much.

I adored Wulf's The Invention of Nature when I read it three years ago. It is still one of my all-time favourite non-fiction books, which is why I hunted down the graphic version when I heard about it a few months ago.

I'm happy to tackle non-fiction graphics thanks to the marvellous Radioactive: Marie and Pierre Curie by Lauren Redniss. It you're not really sure how beautiful and informative a scientific biographic story can be, then Radioactive may just be the one to convert you. This was my benchmark when I started The Adventures of Alexander von Humboldt.

The book is an over-sized hardback, printed on quality paper. It's a joy to hold and Melcher's collages are glorious. She used many of Humboldt's maps, engravings and illustrations to create the backdrops. Letters, diary entries, notes and sketches, herbarium specimens are also superimposed into many of the pages. There's a lot to look at in these details. It was a great way to present some of the information.

But I struggled with the information font that capitalised EVERY SINGLE LETTER AND WORD. It felt like they were shouting at me the whole time. (Yes, I know that most graphic novels use capital letters, it's supposed to make it easier to read...when reading someone else's handwriting. But if you're using a typeprint, then surely there is no need for this standard?)

And I REALLY struggled with the portrait drawings of Humboldt, Bonpland and the other characters as well as the speech bubbles attached to them. They lacked substance. The figures were lifeless and expressionless. The dialogue was dull and failed to add anything to the story. In fact, the dialogue often repeated the information provided in the text. It was also often hard to know which speech bubble to read first. By the end of the book, I still couldn't remember which one was Humboldt and which one was Bonpland; their personalities never came alive.

Melcher's design was often quite striking but sadly, most of her watercolours and sketches left me cold. I preferred the pages with less stuff (i.e. less figures and more collage). 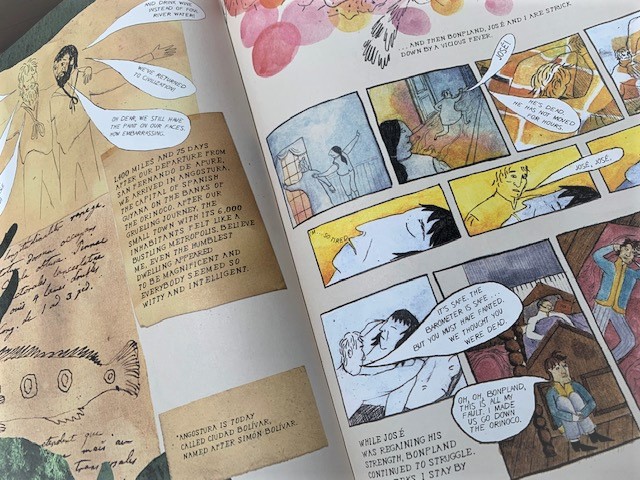 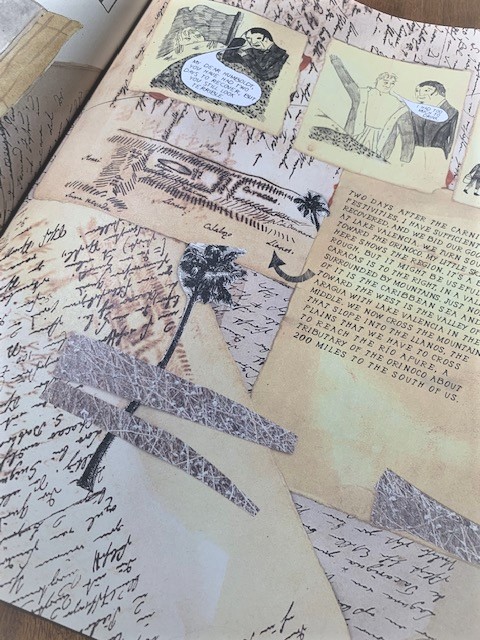 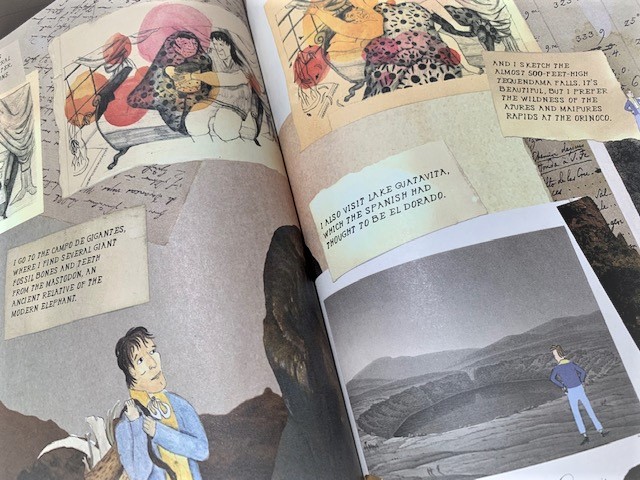 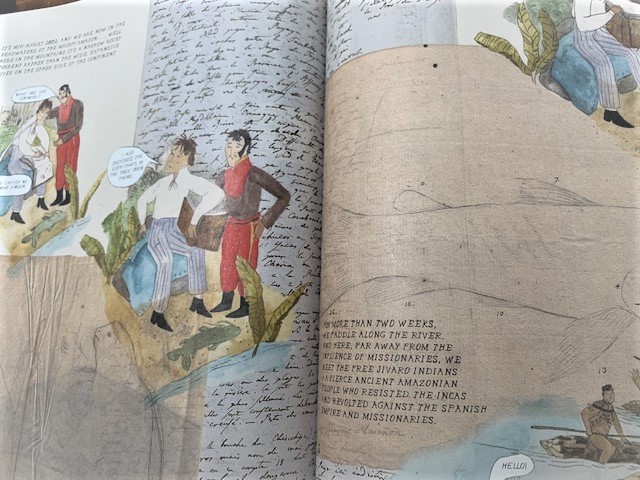 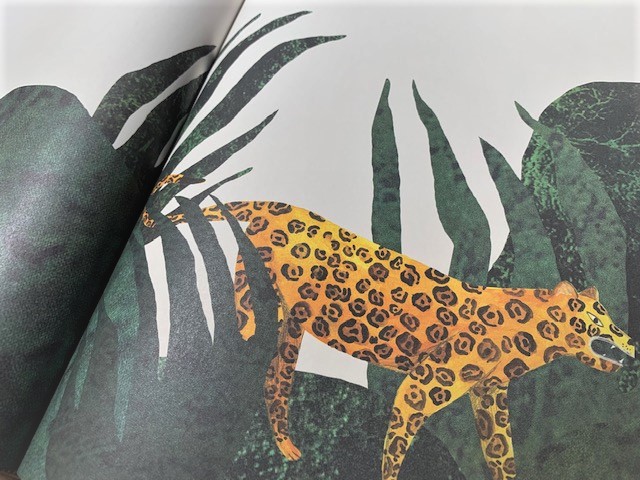 It was a grand idea to turn Humboldt's story into a graphic non-fiction, but sadly the final result was less than grand. Rookie mistakes, I suspect - 'How hard can it be to make a graphic book?' A lot harder than you might think.

The graphic novels I've read and loved over the years are the ones that make you feel something. They make connections; they go on an internal journey as well as the physical one. They make you forget that you're looking at 'cartoon' figures; they take on a life of their own. When they speak, they have something meaningful to say. Even the non-fiction ones.

Beautiful, arty graphics are possible - think Shaun Tan and Neil Gaiman - as well as most of the picture books I've featured on this blog. However it's a lot harder to get the synchronicity between the text/dialogue and the illustrations just right - a lot harder than most people think.

I admire Wulf & Melcher for their intent, but I wish they had taken more time to develop their graphic book technique.

If you really want to know about this amazing scientist who was way ahead of his time, then read Wulf's The Invention of Nature: The Adventures of Alexander von Humboldt, the Lost Hero of Science (2015). You won't be sorry.
Posted by Brona Labels 2019, Biography, Graphic Novel, Non-Fiction, Picture Book, Science at 14.12.19
Email ThisBlogThis!Share to TwitterShare to FacebookShare to Pinterest